Happy birthday to me

15st 6lb, 4.0 units. We marked my 56th birthday by leaving our son and heir at home in the care of a Norland nanny (albeit a Norland nanny who is also an old friend of Mrs H’s) and driving to Hampshire for a night at the opera: the opening performance of Tosca at Grange Park. Stirring stuff it was, too: the best production I have seen since Covent Garden retired their classic by Zeffirelli, featuring the most convincingly evil Scarpia ever, which made it harder than usual to advance my traditional argument that he is actually a perfectly decent man trying to maintain law and order under difficult conditions. While Claire Rutter had, to my relatively untutored ears, just about the perfect voice for Tosca, if not necessarily the perfect physique to convince completely as a femme fatale. Still, at least she did not bounce back into view after she hurled herself off the ramparts of the Castel St Angelo.

We had been warned by e-mail that there had been “huge demand for The Opera Restaurant and … it is going to be very cosy. We will be relying on the Dunkirk spirit.” The management evidently not having grasped the idea that it might be an idea to restrict bookings to the maximum number of people that can be comfortably accommodated, even though it is the principle on which every successful restaurant on the planet seems to be run. I then received a phone call asking whether I would mind sharing a table for four with another couple to help them out. I suppose if I had actually been on the beach at Dunkirk, with the Luftwaffe strafing me and artillery shells raining down, I might have been prepared to compromise. As it was, I merely pointed out that it was my birthday and I had been hoping for a romantic dinner a deux with my beloved wife. So we ended up, rather embarrassingly, with what appeared to be the only table for two in the entire place, shoehorned into a window recess and in close proximity to a party of four middle-aged legal types. This enabled us to derive full benefit from all the obiter dicta of one of those judges who thinks, wrongly, that he has a gift for comedy and is the absolute life and soul of the party. How I should love to have been able to see him don a black cap and sentence someone to be hanged. Though not as much, I suspect, as he would.

Then we drove back to the friends who had so kindly volunteered to put us up for the night, and I washed down the birthday cake they had kindly made for me with a generous amount of fine malt whisky. 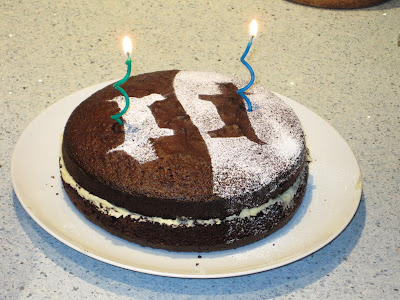