15st 7lb, 4.0 units. The last two songs I downloaded from iTunes were the leitmotivs of The Baby (hereinafter always to be called The Boy, since at 3.53 this afternoon he had miraculously survived a whole year without either of his parents killing him, or allowing him to give full rein to his recently discovered strong urge to top himself). They were Bing Crosby singing “Busy Doing Nothing”, from the soundtrack of A Connecticut Yankee at King Arthur’s Court and Paul Robeson crooning “Little Man You’ve Had a Busy Day”. Because the key word that describes The Boy from the minute he wakes up to the minute we lay him down in his cot at night is just that: busy.

Busy crawling towards danger at warp speed. Busy trying to walk by holding onto items of furniture that are not solid enough to support him, or passing cats and dogs that are even less so. Busy shoving inedible things that present a serious choking hazard into his gob. Busy pulling his books off his bookshelves, or heaving his cuddly toys out of his cot, or his more durable playthings out of their basket, and arranging them into a satisfying mess. Busy talking total gibberish, interspersed with occasional apparently understandable words like “ball” (though that might not have been a reference to a toy but his selection in the Labour leadership contest, if only because he can’t yet get his tongue around “Miliband”).

I am told that all this is normal behaviour for a one-year-old, but it still comes as a bit of a shock to a 56-year-old who was quite tidy by nature, used to solitude and, it would be idle to deny, rather set in his ways. I am even prepared to admit that I may well have behaved the same way myself, though nearly all the witnesses who could corroborate that are long dead, though I certainly did not have the same range of personal possessions to fling around.

Anyway, The Boy and I are clearly on precisely the same wavelength since I have been very busy doing nothing, too, hence the shortage of things to write about on this blog since the beginning of the week.

We opened The Boy’s presents first thing, then I went off to my office and continued to be busy doing nothing, while Mummy entertained him for the day. 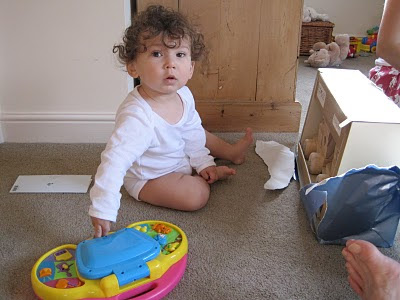 My First Laptop: will it keep his sticky fingers off the real thing? 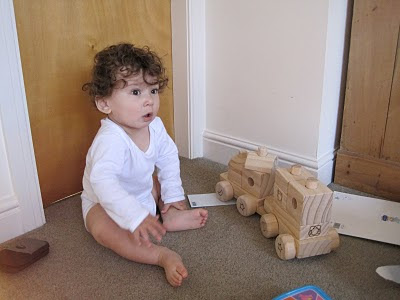 My First Train: whetting his appetite for Hornby Dublo 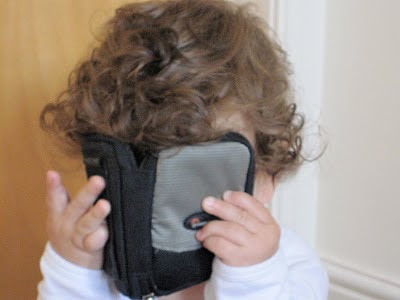 My Best Present: a camera case for playing Peepo


I promised to erect his main present of a garden swing in the evening, but naturally I never meant it. Particularly after I received an e-mail from a friend with experience of erecting garden swings, warning that it would involve bloodshed. Luckily by this evening his mother was too tired to nag me about it – as she is every evening after a day with her pride and joy.

Magic. Time to crack open a decent bottle of wine and toast the little man with it as he lay sleeping quietly in his cot.

Sounds like Charlie is doing fine, just as his
operating manual says he should. He's not really busy doing nothing. He's actually
learning all sorts of early lessons about how the world works..... or doesn't.

Sounds exhausting but utterly delightful.
Bless his heart and his Mummy's and Papa's.