15st 6lb, 8.8. units. I forgot to say that the hog roast was a complete triumph: absolutely delicious roast pork sandwiches with all the trimmings, followed by a choice of surprisingly good puddings (pavlova or profiteroles – we did not investigate the menu beyond the letter ‘P’). The aforementioned main course trimmings included the best pork crackling I have enjoyed in ages, just like crackling ought and used to be. I kicked myself for failing to make subtle enquiries into their secret recipe for achieving this, but by late evening I had worked it out as I greedily slurped down my fourth or fifth pint of water and deduced that it came down to nothing cleverer than rubbing several pounds of salt into each leg of pork before beginning the roasting process.

There was rather a lot of pork left over, so I kept going back and helping myself to bits of crackling before it went soggy. Then we had another roast pork sandwich for supper, and ate some more of the stuff today. By evening, I had reached the point of not wanting to eat pork again for as long as I lived. If a vegetarian activist had rung up at that point, there is no telling what I might have pledged.

There were grandiose plans to go out for lunch and generally entertain our guest, but somehow we ended up lounging around in the garden. Well, I say lounging around, but by the time I had had my morning shower I could already hear the chink of spanner on scaffolding pole as our guest Iain wrestled with The Boy’s swing. He seemed to be making remarkably slow progress, but this turned out to be because he had spent the first hour or two disassembling the parts that had been put together back to front the previous afternoon. Having made a careful check that no blood had been shed, I joined him and together we slowly put the thing together. The instructions were in that multinational style involving drawings and no words, which made it largely impossible to determine what the hell we were intended to do. Iain’s preferred approach was to do the whole thing by instinct, matching holes with similarly sized bolts and worrying afterwards about whether the washers were supposed to go on the head, the nut, or nowhere at all. The thing on which I found it easiest to agree with him was that, while the drawing of an over-tightened bolt with a big “X” through it made perfect sense, the matching one of an under-tightened bolt was the path to madness. Because, if we went down that route, we were going to end up with a swing that shook and rattled like an ancient Pacer train making its way across the Barmouth bridge in a hurricane. True, we might live to regret it in ten years’ time when the apparatus fell victim to metal fatigue, but in the meantime The Boy should be able to swing to and fro without that vague sense of uneasiness traditionally associated with Aeroflot flights and fairground rides put together by obvious drunks or drug addicts.

We finally found ourselves in possession of a surprisingly large and industrial-looking metal structure supporting a small child’s swing seat. Then we turned the page in the instructions and found the bit that actually contained some words. These told us that we must next dig four holes in the lawn, 1ft square and 3ft deep, and fill them with concrete before inserting the pins attached to the four legs of the swing (though not, under any circumstances, the legs themselves). The swing was completely unsafe to use without this concrete base, which one could not help thinking they might have mentioned on the front page rather than right at the end (e.g. “To assemble this swing you will require a Philips and a regular screwdriver, two spanners, a large box of Elastoplast and a f***ing concrete mixer”).

Sod it, I thought, as I drove the pins on the rear two legs into the lawn with all the force that I could muster. I then repeated the process with the front legs, which worked rather less well since they bent. Still, it looked as though it would take the weight of a 23lb Boy to me. Iain did ask at around this point whether I thought I had put the swing in the optimum place, but there was clearly no shifting it (not now, not ever) so I just gave him one of my looks. Even though clearly no-one in their right mind would have erected it where it blocked the lovely view of the Shropshire hills from the conservatory. 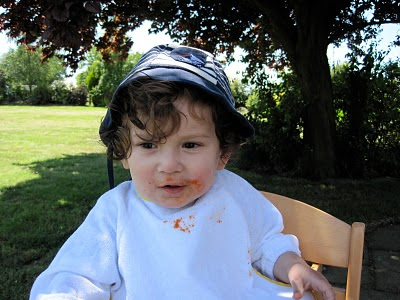 Tomato sauce, not blood
Shortly afterwards a suitable guinea pig turned up with his mother and we put him in the swing for a test flight. He bloody loved it. Not a bad day’s work, then. 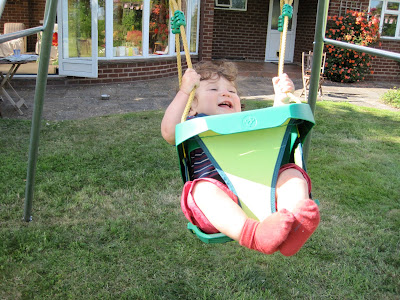 The Boy: bloody loving it
(a top birthday present)