15st 6lb, 4.5 units. And so we came to the morning of The Boy’s Birthday Hog Roast – quite possibly the only Muslim-organized hog roast on the planet this Saturday, or indeed this year. I was out at an early hour hanging a banner and bunting, while Mrs H blew up balloons. Then I had to drive to Crewe station to pick up our only guest from outside the region. The weather was distinctly on the chilly side as I wobbled up my ladder first thing, but showed encouraging signs of brightening up. That left as the only cause for nail-biting a mild concern as to whether the people from whom we had ordered the hog roast would actually turn up. By 12.30 Mrs H was scouring the small print of their contract, which specified that they would arrive half an hour before service had been requested, which was at 1.30. Imagine her relief when a large car carefully reversed into the parking area in front of the garage at precisely one o’clock. And then imagine her concern when it proved to contain not a couple of cheery serving staff and a roast pig, but a pair of extraordinarily prompt guests. 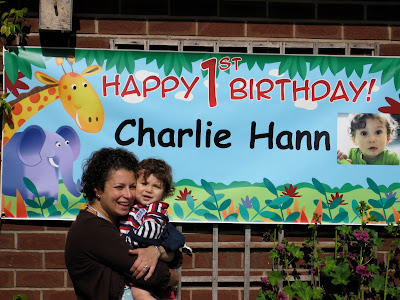 Wor banner; wor Baby
It would make a better story if the hog roast providers had not driven up five minutes later, but sadly this blog always puts Truth First, and they did. I showed the cheery serving staff the area we had set aside for them, within 10ft of a working power point as requested. But they said that they did not actually need this as they had left their roaster at home, merely bringing with them a couple of legs of hot roast pork. I must confess to some mild disappointment, though nothing to that I experienced on my initial realization that our guest numbers were insufficient for them to build a giant pyre in the middle of the lawn and use it to roast a whole pig on a spit.

I spent much of the next hour pouring out glasses of champagne for newly arrived guests. Then I started seriously drinking the champagne, and completely failing in my hostly duty to keep going around and ensuring that everyone’s glass remained well topped up. I became so distracted that I completely missed what those who saw it assured me was the absolute highlight of the day, the Birthday Boy being sick over his grandfather in such comprehensive style that both required a complete change of clothes (in which The Boy had a distinct advantage, in actually having a complete change of clothes in the house). In fact, I got so pissed that I turned down an invitation to make a speech when Mrs H brought out The Boy’s birthday cake, and when did I ever do that? 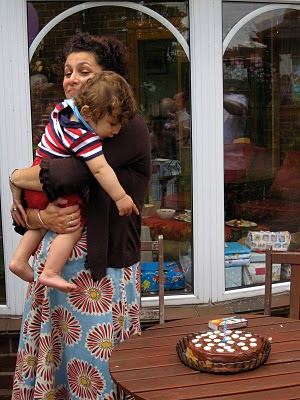 The Boy accurately counts the number of candles on his cake;
he's a genius, I tell you
However, it could have been worse. Even I was not so drunk as to attempt to erect the swing that we had bought as The Boy’s principal birthday present, preferring to go for a nice lie-down after most of our guests had left. Into this breach leapt The Boy’s grandfather and our guest from the North East, who spent some time puzzling over the instructions and eventually brought them back indoors drenched with blood, just as my friend with previous experience of erecting swings had predicted.