A cheering bunch of punts

15st 6lb, 9.0 units, making a total of 44.7 units for the last seven days. So at least I wasn’t lying when I told the nurse at my recent check-up that I was pretty sure I wasn’t getting through a disgraceful 32 units per week.

I would have made a firm resolution to do better, starting today, if only I had not made a long-standing arrangement to go to Cambridge for a reunion dinner at my old college. The invitations seem to be arriving with increasing frequency, since I am sure the last one (which I did not accept) came in 2005. Seeing that they had invited those arriving at the place in 1972, 1971, 1955 and 1950 or before, a cynic would no doubt observe that they were specifically targeting those whose children had grown up, left home and become such a source of irritation that their parents were starting to think of alternative good causes to take prominent places in their wills. Obviously they had reckoned without me, turning up for afternoon tea at the Master’s Lodge with a boisterous one-year-old in tow. There were no other infants in evidence, though I did run into a contemporary who had brought along his five-year-old son and three-year-old daughter, or was it the other way around? Also from his first marriage, or at any rate from his first successful attempt to have a family. Mrs H got on like a house on fire with his missus, though I was disconcerted to overhear her advising Mrs H to “have another one as soon as possible – go for it!” Albeit possibly less upset than I was to overhear Mrs H confessing, with a nod to me and The Boy, that “my big worry is ending up with both of them in nappies at the same time”.

The reason for bringing The Boy was that, on his previous visit to Cambridge in Mrs H’s womb, he had kicked enthusiastically as we walked through my old college, despite having remained completely unmoved by the charm of Queens’ and Clare and the splendours of Trinity and King’s. Mrs H concluded that he had ambitions to attend the place.

Back in 1972, of course, having had a father at a college before you was a positive recommendation. Now, as Oxbridge pursues the sacred goals of equality and diversity, it is a distinct handicap, though if he proves to be bright enough to go for it I suppose we can always play Mrs H’s ethnic minority card and hope that they mistake me for his grandfather. Over pre-dinner drinks I was heartened to meet a contemporary, now a distinguished professor of law, who reported that both his sons had attended the college despite the systems put in place to prevent that sort of thing. The trick, he confessed, is for them not to blurt out “My Dad went here!” at their interview. I think The Boy should be able to grasp that, with a bit of luck, though having a relatively uncommon surname might prove to be a bit of a handicap.

Conversation then moved on to the rigours of Oxbridge interviews, with another friend reporting that his daughter had endured three solid days of inquisitions in her unsuccessful attempt to get into Oxford. What a contrast, we agreed, with our own experiences in 1971 with the college’s director of studies in history, who saw each of us for a maximum of ten minutes – an experience chiefly memorable for the fact that he was wearing pyjamas at the time. The only question any of us could recall was “What do you think of Macaulay?” to which my friend in question had replied “Who’s Macaulay?” He attributed his subsequent admission to the college to this being misinterpreted as an informed dismissive opinion, rather than a confession that he had never heard of the most famous historian of the nineteenth century. 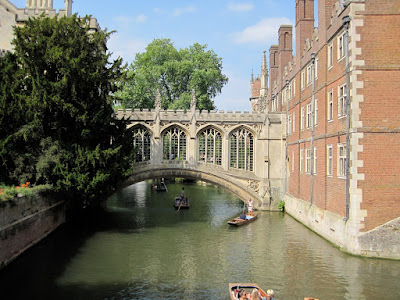 A familiar scene for me ... 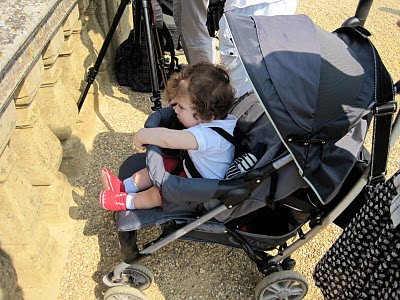 ... but a new one for The Boy, who had evidently never seen anything as amazing in his short life
Whatever the future may hold, it was worth bringing The Boy as he thought that punts were quite possibly the most fascinating thing he had ever seen, and his presence clearly cheered up my contemporaries as they sat at their tea tables on the lawn this afternoon, wearing smiles that said “Thank God we’ve put all that at least 20 years behind us”. Though it is just possible that it was Mrs H’s low cut frock that raised their spirits, now I come to think of it.