For you, the holidays are over

I returned from holiday late on Sunday, after an inevitably long drive from Northumberland that was considerably lengthened by road works on the A1 south of Morpeth.

Locals have angrily taken to Twitter to cite the resulting chaos as evidence of the need to make urgent progress on the Government’s pledge to dual the A1. Ignoring the fact that the problems afflict one of the bits that was dual carriageway already, until someone decided that the peak holiday travel season would be a good time to close half of it down.

As I walked through the front door two freshly bathed small boys hurtled down the stairs, yelling greetings. The younger shouted “Charge!” and literally flung himself from several steps above where I stood. Given my age, slow reactions and legendary lack of co-ordination it was something of a miracle that I actually managed to catch him.

“It’s a trust thing,” Mrs H explained. “It shows how much he trusts you.”

I remarked that it could easily have made him much better acquainted with another sort of trust. The one that runs our local hospital.

At any rate I feel able to mark down the fact that they were clearly pleased to see me as an indication that our two week family holiday in Northumberland had been a success.

Much more of a success, certainly, than our previous attempt to spend two fun-filled, sun-filled weeks on the golden sandy beaches of England’s premier stretch of coast. On that occasion we spent 13 days out of 14 watching rain lash horizontally against the conservatory windows, while the 14th day of brilliant sunshine was naturally the one we had arranged to spend indoors with friends in Newcastle, in anticipation of the deluge continuing.

It wasn’t sunny, as such, all the time. But it was generally dry and warm enough to be outdoors without either pullovers or displeasure.

We spent a fair bit of time on the beach, at Alnmouth, Seahouses, Bamburgh or Druridge Bay. The last was the greatest revelation: I had forgotten just how beautiful it is. 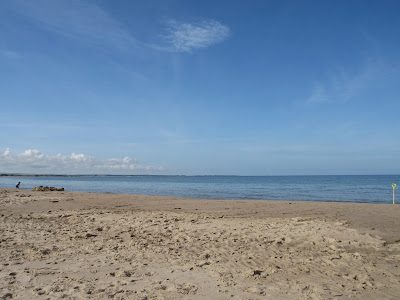 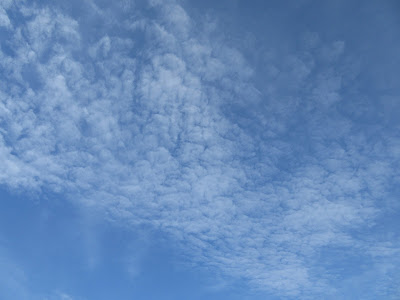 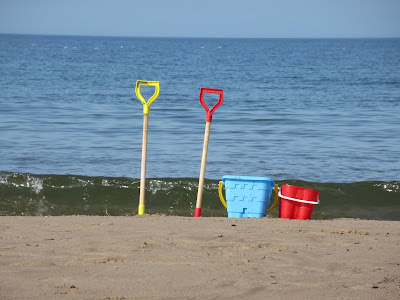 We spent nearly every half decent summer Sunday there when I was a child, driving in my Dad’s white Ford Consul or later green Morris Oxford, with Grandma H (1881 - 1973) in the back, always clad in black like the granny in Giles’s cartoons.

Out of the car boot came a primus stove encased in an old biscuit tin, on which Dad would first heat up Heinz cream of tomato soup, always diluted with milk, then brew tea for the grown-ups while I tucked into the packets of tinned salmon sandwiches. Then it was off over the dunes for an afternoon on the beach and in the sea while Grandma dozed in the car.

I have an abiding memory of discovering buried treasure in the sand one day: a hoard not just of old pennies but of shillings, florins and half crowns. My Dad offered to look after it for me. I never saw it again. With hindsight it is only fair to add that it might have fallen out of his trouser pocket in the first place.

Anyway, our days on the beach were just like that, only minus my late parents, the primus stove, the buried treasure and the canvas windbreak that might actually prove rather a good investment for 2016, if I still own a house in Northumberland and am permitted to return there for my holiday.

The boys would certainly be in favour. I asked the elder yesterday morning if he had enjoyed the break and he said he had.

“Would you like to go back again at half term?”

“I think Mummy wants to go to Majorca.”

“I don’t want to go anywhere they don’t speak English! I like it here!”

As Mrs H often observes, it was just like I had been shrunk and started speaking in a higher pitched voice.

The irony is that she also says that she shows him pictures of Majorcan villas and hotels, with swimming pools and sandy beaches, and asks if he would like to go there. And he says he would, very much. So long as he can make himself understood. “I don’t want to spend my time pointing at things!”

On the one hand this desire to please both parents by telling them slightly different things might point to a future career in diplomacy. On the other, I don’t think that a refusal to converse in anything but English is necessarily going to constitute a strength with the Foreign & Commonwealth Office selection panel.

Our nearest State secondary school brands itself as a “specialist language college”. So I suppose I’d better stop writing this blog and apply myself to something more remunerative, with a view to saving up to pay his school fees somewhere else.