As the bishop said to the actress

15st 8lb, zero units. It’s been too long, as the bishop said to the actress. That, at any rate, was the verdict of the one person who has bothered to e-mail me to say that they are missing this blog. To be honest, I’ve missed it, too. But then I’ve been physically ill more or less continuously since Christmas, mentally ill ditto since about 1973, distracted by external events like the General Election (about which I did at least manage to write something on my other blog), and occasionally trying to keep an 11-month-old baby entertained and, more importantly, to prevent him from accidentally committing suicide. On top of which, every now and then I have felt obliged to do just a little bit of work to generate the income we seem to require to pay for boring things like housing, heating and food. The only alternative financial strategy we have managed to devise up to now is winning the lottery and, well, the odds seem stacked against us. Though not as badly as they were before we started buying the tickets.

On the health front, a barrage of tests from a chest X-ray to multiple blood extractions has established that my cough is the result of … having a cough. Fantastic. Two courses of antibiotics have restrained but not eliminated it, and presumably ensured that I will have a remarkably high degree of immunity to those drugs when they are next prescribed to deal with something more imminently life-threatening.

One particularly unpleasant test established that the stomach upsets I have also been suffering since late February were the result of a campylobacter infection. It was not thought worth prescribing any treatment for this, but my doctor seemed very excited about tracking down the cause and tells me that I can soon expect to find an Environmental Health Officer (no doubt wearing suitable protective clothing) minutely analysing the untreated spring water supply at my house in Northumberland. Which will be a complete waste of his or her time, given that the aforementioned stomach upsets have occurred all over the country at times completely incompatible with the theory that drinking tap water in Northumberland had anything to do with them.

The pièce de resistance came last week, when I woke in my London club after an admittedly heavy day on the booze to find myself suddenly over-endowed in the testicular department (referring to the size of the existing pair, rather than the acquisition of any more of them). I decided to be a man, for once, and to grit my teeth and ignore the swelling and tenderness, while thanking my lucky stars that I was wearing a suit with a reasonably loose-fitting pair of trousers.

Then, on the way back to my room after breakfast, I was suddenly doubled up with as intense an abdominal pain as I have ever experienced, and I felt that the time had come to seek medical advice. First I rang a former colleague and asked if there was any chance of seeing his company doctor. Yes, said the woman who answered the phone, we could fit you in at 4.30. Better than nothing, I thought, so proceeded to answer a long series of questions about my name, address, age and medical history, which I felt confident she was taking down with an average of at least one mistake per word. At the end of which she turned back to her computer and said “Oh, I’m sorry, while I’ve been talking to you that slot has been taken by someone else. Would 5.30 be all right?”

“No it bloody wouldn’t, I’ve got a train to catch.”

Still, the former colleague then came up trumps with a visiting doctor service which also allowed patients to visit them, and I duly took a taxi to Harley Street for a half hour consultation which established beyond reasonable doubt that I was suffering from a kidney stone, and prescribed some anti-inflammatory drugs to deal with the side-effects. Sadly I did not have time for an expensive ultrasound scan of my kidneys to confirm this diagnosis, but the doctor’s PA kindly supplied me with a letter of referral (containing a mistake in every other word) to present to my own GP to arrange this.

I duly did this two days later, and my own GP took only ten minutes to pronounce that the diagnosis of the Flash Harry from London was clearly total bollocks. How could I be suffering residual pain from a kidney stone in my testes, when that was the pain I experienced first? A good point, and one that had actually occurred to me when I was sitting uncomfortably in Harley Street, but which I felt too frail to make. My GP preferred the theory that I was suffering from some –itis or other, the name of which I have already forgotten, and prescribed yet another antibiotic to knock it on the head. It is early days, but I feel that it may well be inflicting fatal collateral damage on my cough, too. Fingers crossed.

As a result of being ill all the time, I have also been thoroughly depressed. Everything seems to take ages, if it gets done at all. I rarely have the energy even to read a newspaper in the course of the day and, given my temperament, this means that said paper is then put aside and added to the huge pile of papers I am definitely going to read one day before I die. There are at least five boxes full of the bloody things in my Northumberland study alone. I keep praying for a localized fire.

I went up to the North East ten days ago, to attend a business conference that provided one of the best networking opportunities of the year for a PR man anxious to rebuild his client base. Only I was so bloody miserable that I sneaked off at lunchtime and went to drink Pimms in my conservatory instead. I intended to pull myself out of the pit of despair by devoting the following day to a long walk in the hills, but predictably someone rang up wanting me to do some work, which took far longer than it would have done if I had not been so thoroughly depressed. Then I ended up drinking Pimms in the conservatory again.

All I had to do on the next day was to get up early and drive to Cheshire in time for a wedding, but I failed even in that after I was woken in the early hours by a particularly unsettling nightmare involving The Baby, and felt obliged to have a lie-in to recover from it. I finally got back to Cheshire in the evening, some hours before Mrs H returned from the wedding reception, looking particularly stunning. It was only now that she explained the reasons – and they were good reasons – why she had especially wanted me to accompany her to this particular wedding. Then she forgave me. Truly, although she spoils it slightly by continually pointing it, I am a very lucky man.

Still, time to turn over a new leaf now for June. A determined effort to lose enough weight to enable me to fit into at least some of my clothes is definitely required. It is my birthday later this week, but with any luck it will pass unnoticed. Then, two weeks later, The Baby (or The Prisoner, as we increasingly think of him) will celebrate his own first birthday. 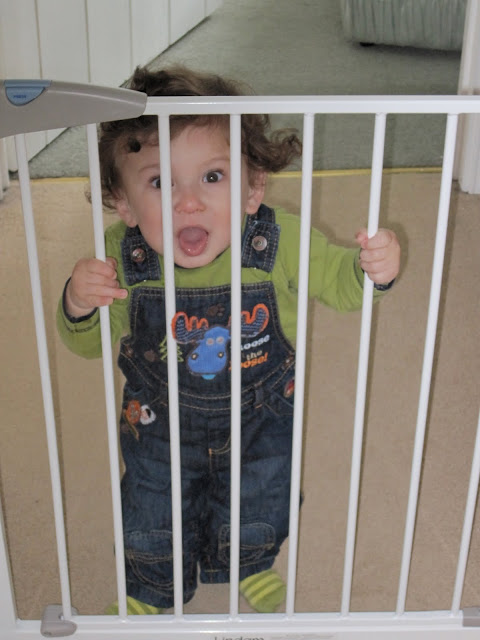 Why do we call him The Prisoner? 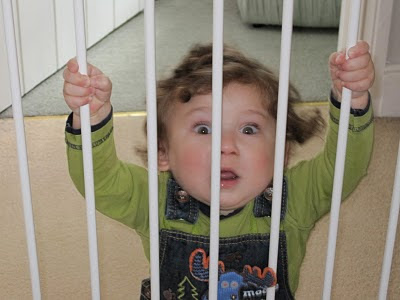 Oh, no particular reason.
But apparently he is a Moose, not a Number.
I was for ignoring this, too, on the grounds that he is blissfully unaware of the concept of birthdays, but was overruled by higher authority. Apparently the done thing is to invite all his baby friends around for a knees-up (or, more likely, bums-up) which naturally means inviting all their parents, too. Mrs H decreed that the ideal solution was a hog roast accompanied by lashings off booze, which seemed slightly odd to me on two grounds:

Still, it is clearly not for me to reason why, but to go out and buy the balloons and banners with which we will need to festoon the house, and the swing for the garden which The Baby has apparently been promised as his main birthday present (note the word “main”.

So, if you’ll excuse me, I’ve got to head for the shops. Bank Holiday Monday when the weather is too cool to draw people to the beaches or the countryside. Should be nice and quiet, then. I’ll try not to leave it another month before my next report.

Though happy to find your post, truly sorry you are still enduring such misery.

Charlie is a trip, so expressive behind his bars. Darling boy.

Wishing him as well as you, each, a very Happy Birthday!