I had an enlightening conversation with the four-year-old over breakfast this morning. First he imparted a great deal of information about dinosaurs, including several that I had never even heard of; then he gave me a run-down of the main categories of animal classed as reptiles.

“Do you know, Daddy, what is the largest lizard?”

“Is it a Komodo dragon?” 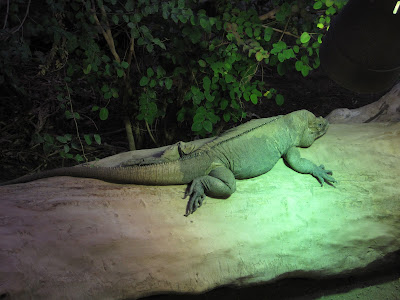 He gave me a look of shocked surprise and said, “Correct!”

Then added helpfully, “That means you were right, Daddy.”

“I’ve seen a Komodo dragon. They have them at Chester zoo.”

He looked surprised again, then changed the subject to his best friend at the pre-school he has just left. He loves playing with his best friend but sometimes another boy comes along that his best friend prefers to play with. But this other boy is going to a different school in September so my son’s best friend will have to “stick together” with him in future.

It’s nice when life works out like that, isn’t it? I wish it had happened to me more often.

Having to make one's own bed

I have now cunningly wangled two peaceful weekends in Northumberland constructing a bunk bed. The first, to be fair to me, was utter hell: seven solid hours of unremitting toil bolting, gluing and screwing the individual beds together. I returned to Cheshire exhausted and with a large bandage on the second finger of my right hand, to compensate for the skin still adhering to my screwdriver.

I showed the following picture to a so-called friend who said, “Oh, you’ve just been assembling a flat-pack! I thought you meant that you’d actually made the things yourself!” 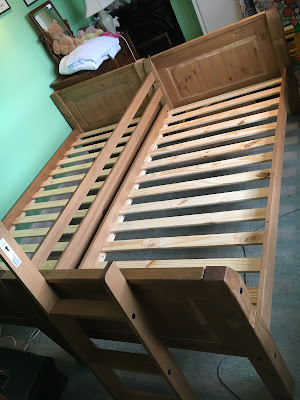 Yes, because I am exactly the sort of chap who would know how to go about cutting and planing virgin timber to make a bed.

Anyone who is so blithely dismissive of the effort involved in building flat-pack furniture has clearly not spent long enough doing it. Though in truth, any time is too long. I would much prefer to have bought a ready-made bunk but could not find one. Which may be just as well, as it would have need disassembling to get it up the stairs and into the bedroom, thereby taking us roughly back to square one.

The instructions did specify that putting the thing together was a two person job. In fact, the only small but critical phase that required any support was lifting the upper bunk on top of the lower one. By an immense stroke of luck two friends proposed calling in for tea yesterday and were able to help me do this. They even brought a top class lemon drizzle cake with them. 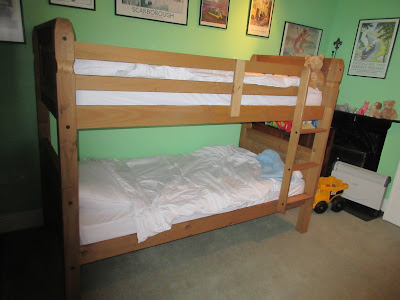 We needed the bunk because our sons’ bedroom is too small for two full size single beds, and they have outgrown their cot beds. We do have another bedroom already equipped with two full size single beds, but it is downstairs, right next to the sitting room, and we assessed that there would be zero chance of their actually going to sleep there until we went to bed ourselves.

Now everyone warns me that we have set ourselves up for a nightly battle over who is going to sleep in the top bunk. The manufacturer’s instructions specify that the top bunk must never be occupied by a child under the age of six. My four-year-old thinks he has agreed a rota with his seven-year-old brother. So it is Elfin Safety versus Democracy. I wonder which of those will come out on top?
Posted by Keith Hann at 15:09:00 No comments:

Trains in the garden

It all started with the Boy complaining that the train table in his bedroom was too small. He wants more tracks and, to be fair, I can see his point. Two ovals and three sidings on a 6’ x 4’ sheet of plywood afford limited opportunities for creative play in 00 gauge. We could buy him a bigger baseboard but there isn’t room for anything much bigger than 8’ x 4’, and with the best will in the world I can’t see that making a massive amount of difference towards fulfilling his ambitions for a locomotive roundhouse, turntable, marshalling yards, tunnels, bridges and so forth.

So in a moment of madness I said, “We could always build a railway in the garden.”

In truth, this has been a not particularly secret ambition of mine since I was a small boy myself. At my parents’ house in Longbenton it got no further than constructing an embankment through the rose bed, which I had to keep explaining away as a novel decorative feature. The tracklaying gang never materialised owing to pocket money budgetary constraints.

In my own house in Northumberland I went as far as to design the back garden with raised flower beds specifically intended to accommodate model railway tracks. There is even a hatch into the conservatory, through which trains were intended to steam to an indoor station complex. But as with so many grand Victorian railway schemes, progress rapidly ground to a halt owing to a critical lack of funds. Combined, in my case, with indolence and technical incompetence.

Back then I also lacked the wonderful excuse of having children to play with the trains. Now that that gap in my life has been filled, it is surely now or never for a garden railway.

But what sort? The Boy’s first thought was simply to extend his 00 gauge network outside. Which would be handy in terms of the capital outlay required, but seems slightly impractical when every falling leaf would carry with it the risk of a catastrophic derailment. Something chunkier, perhaps with the possibility of using actual steam motive power, would surely be preferable. Though sadly neither the length of the garden or the depth of my pockets are compatible with building the sort of thing on which even small boys can ride.

As a starter for ten, I bought a book and a set of DVDs from a garden railway specialist shop (yes, there are such things) in Buckinghamshire. Those DVDs have now been watched so many times that I know every scene, and every word of the commentary, off by heart.

The Boy is wildly enthusiastic. His younger brother, who usually claims only to be interested in cars and animals, has discovered that he quite likes trains after all. Even more remarkably, Mrs H has started making positive noises about how we could run the trains along a dwarf wall around the lawn that would blend nicely with the garden, and stable them in the shed when they are not in use.

As an incentive to get started, I received from the boys a £100 gift voucher from the garden railway shop for my birthday last month. And serendipitously this week Mrs H and I found ourselves attending the opera at Garsington and staying with friends who live only about five miles from the shop. After a long and fruitful conversation with the proprietors we came away with an LGB starter set, some extra track and a supply of steam oil, and we are now the proud owners and operators of a small oval railway on the lawn. 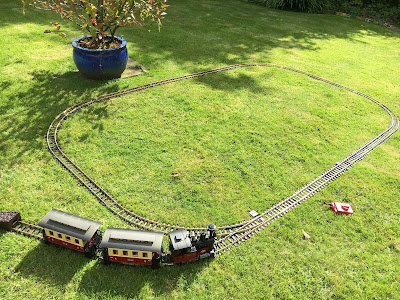 The Boy is eagerly telling his friends that we will soon have five, six or seven tracks heading all over the garden, and stations representing different countries.

I think this is highly unlikely. But given time and perhaps a lottery win I think we may reasonably aspire to have a garden railway worthy of the name within the next year or two. Watch this space for further reports.
Posted by Keith Hann at 15:03:00 No comments: