15st 12lb, 4.5 units. Yesterday passed in a hungover blur, the highlight of which was dining on the staggeringly expensive (but possibly even worth it) fillet steak we had bought in Alnwick that afternoon. This left me in excellent shape to head back into Alnwick for another pub lunch today, to meet the friends who had proposed an afternoon at the Alnwick Garden as a suitable treat for all the family.

Now, to say that I was not looking forward to this visit would be something of an understatement. I had been to the fabled Garden once before, a year or two after it opened, at the behest of a visiting ex-girlfriend, expecting great things given everything that I had read about it in the cheer-leading local media, the huge sums invested in the project and the fact that Alnwick had been brought to a standstill for the best part of a year while a new water main to supply it was laid smack down the middle of the main road into the town from the A1.

To say that it took my breath away would be an overstatement, since I distinctly remember that I was still capable of uttering “Is that it?” as I surveyed this remarkably small (all things considered) walled garden, dominated by a large cascade encased in painfully raw ersatz stone (very short of real stone, obviously, Northumberland; I expect it all got used up building the castles, houses, walls and so forth). The cascade did clever stuff shooting jets of water into the air from time to time, but I could not begin to understand how even a duchess could have spent so many millions constructing it, and ended up with something considerably less impressive than the rival ducal cascade at Chatsworth. Our hosts today, who may have known what they were talking about, said that the cost of the project had been vastly inflated by the inevitable Elfin Safety experts insisting on the installation of expensive filtration equipment to prevent the risk of the cascade harbouring and spreading Legionnaires’ Disease.

Has there been a single recorded instance of anyone catching Legionnaires’ Disease from a garden water feature? No? Then that just goes to show how effective all the Elfin Safety precautions have been, doesn’t it? Like that classic exchange with the lunatic on the train to Alnmouth who was pointing a gun out of the window.

“What on earth do you think you’re doing?”
“Hunting elephants.”
“But there aren’t any elephants in Northumberland.”
“I know. Effective, aren’t I?”

Today we kicked off with a visit to the Treehouse and its surrounding rope walkways, which had not been there when I last visited and are huge fun to push a buggy across in the company of a nervous wife. I wonder if they still bring one of those tame Victorian “cake walk” rides to the Hoppings on the Town Moor? If so, I must be sure to take Mrs H for a little treat. 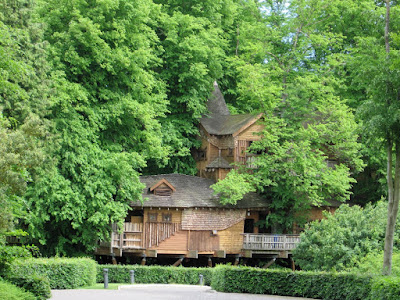 
Then we ventured into the Garden itself, after the usual embarrassment when I declined to supply my name and address in order to make a Gift Aid donation, a scam which irritates the hell out of me at every National Trust property I ever visit, and which even HM The Queen tries on at her Gallery at Buckingham Palace, even though I am patently not making a charitable donation but making a straightforward payment for admission to an attraction. Sainsbury’s might as well try to pretend that I am making a Gift Aid donation when I go to pick up my groceries, which they could then present to me free of charge. 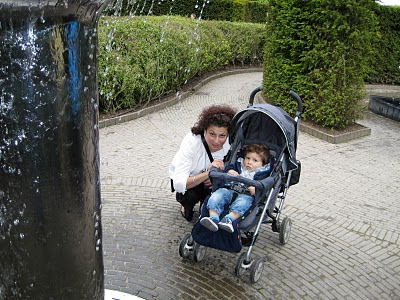 Mummy explains the physics of a water sculpture:
The Boy clearly shares Daddy's aptitude for the subject


The cascade still looks new and bare, but foliage has now grown pleasingly over the surrounding trellises, and various other attractions have been developed including a reasonably mature ornamental garden and the gimmicky poison garden, which should be an absolute “must see” for unsupervised school parties and those serving community sentences. 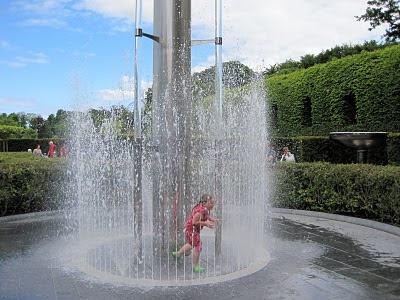 Alnwick youngsters start training early for Miss Wet T-shirt 2020
So, in short, it has got better, as gardens are wont to do up to that critical point where the bloody plants take over and you need to either hire a gardener or resign yourself to spending half your summer attacking the bastards with a range of sharp implements in a doomed attempt to make them learn their place. 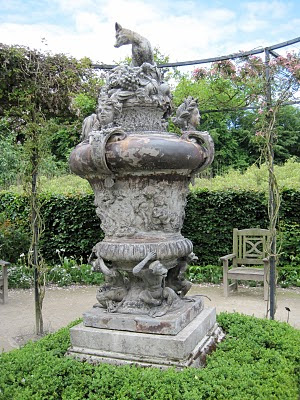 An ornamental thing.  With a fox on the top


Even more importantly, I realized this afternoon that I have started viewing things through the eyes of an inquisitive and easily pleased one-year-old, rather than those of a 56-year-old cynic, and there is no doubt that The Boy had a wonderful time. He loved the water sculptures, the blossoms, the doves … just about everything, really. It was also terrific value for money for him at the child admission price of just 1p. I did not study the small print, but I am pretty sure that anyone who has just experienced that sensation of a light bulb going off above their heads will find that the 1p is conditional on paying for an accompanying adult, too, so that it is not an option to bundle half a dozen boisterous primary school children through the gates, hand over 10p and shout “Keep the change!” as you head off for a relaxing afternoon in the pub. 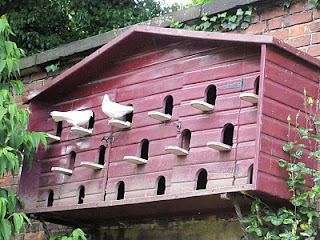 Charlie liked the doves.  At it like knives, they were 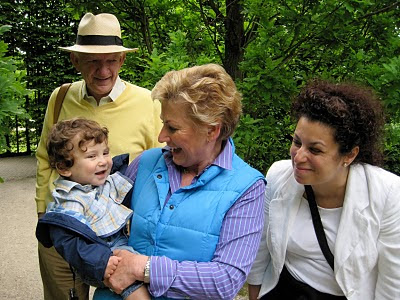 Mummy makes Charlie smile for the camera.
Luckily there were no talent scouts for Special Needs
homes in the area at the time
Even Charlie might consider the website’s claim that this is “the most exciting contemporary garden on earth” to be pushing it a bit, but I do note that they have not spelt “earth” with a capital “E”, so perhaps they are not making quite such a sweeping claim as one might imagine. Perhaps there are lots of even more exciting contemporary gardens constructed on clay, water, concrete, ice and those rafts of redundant plastic bottles that I keep reading about as they gather in the oceans. But none, I suspect, within 25 minutes’ drive of our house in Northumberland, so I dare say we will be back.