14st 13lb, probably (I did not remember to weigh myself until after breakfast, and by then I was 15st 0lb); 5.0 units. After a leisurely morning Mrs H and I drove into Alnwick and went on a trolley dash around Sainsbury’s to assemble the ingredients for the family supper we had promised to supply this evening. Though it has to be admitted that the actual “dash” element was somewhat constrained by the fact that I could see neither over nor around The Baby in his car seat, balanced on a special rack on top of our trolley. For the first time ever I actually visited the deli counter (mainly because there wasn’t a long queue, for once) and we went rather mad buying various pots of various little delicacies like roasted aubergines and courgettes, along with olives, cooked ham, roast beef and some excellent chicken and pork pie. Then there were pizzas, quiches, a roast chicken, Scotch eggs, salads, dips … it was like the menu for one of Billy Bunter’s midnight feasts at Greyfriars. All in all we thoroughly overdid it, entirely at my instigation and over the protests of the ever-sensible Mrs H, and it seemed particularly unfair that it was she who ended up forking out a completely ludicrous amount on her debit card before we struggled to push our overloaded trolley out of the store.

There were rather more cars parked outside than I had expected when we arrived at my aunt’s house in Morpeth, where the aforementioned family supper was scheduled to take place, and I parked very close indeed to the Ford at the rear so as not to block her next door neighbour’s drive. As ever, my car lurched forward a little when parked on a slope, after I had released its foot brake, and it ended up no more than an inch from the Ford’s rear bumper. Just my luck that it should turn out to belong to my elder brother, who turned out to have been watching the manoeuvre intently.

Still, as I pointed out, it could have been a lot worse, though 1.5 inches worse would still have done it nicely.

After this unpromising start we had a very enjoyable evening introducing The Baby to his second uncle, great aunt and numerous first and second cousins, at various degrees of removal. 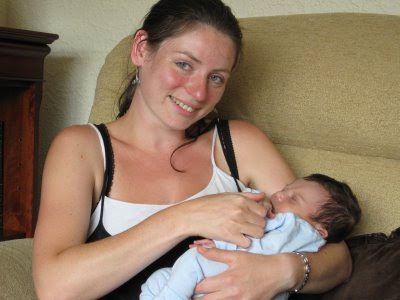 Pass the sleeping parcel: The Baby with his second cousin ... 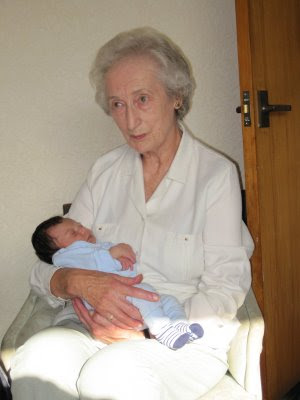 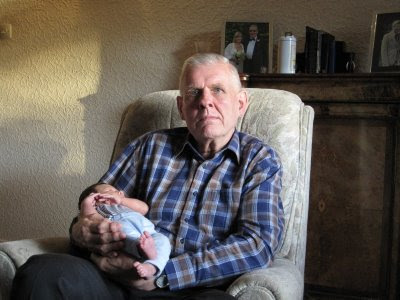 I would speculate that there can’t be many babies with uncles ranging in age from 26 to 71, but I can sense that there must be someone out there poised to tell me that that is NOTHING. I woke in the early hours in an absolute agony of indigestion, entirely attributable to gross over-indulgence at the buffet I had personally selected. This clearly served me right.