14st 13lb, 9.0 units. My radio alarm came on very loudly so I cheerfully removed my wax earplugs and said “I guess that will be 7 o’clock, then!” as I prepared to leap out of bed, but it proved to be only 2.08 a.m. Extensive enquiries failed to get to the bottom of this catastrophe, but I suspect that it was caused by Mrs H patting the wireless in a half-asleep attempt to bring its wind up. Naturally the racket started the baby crying, and Mrs H had to get up to feed him. Equally naturally, I failed to get back to sleep properly during the remainder of the night, finally giving up the attempt at 6.15 and going to sit in my conservatory with a cup of tea to contemplate The Future.

I am torn between a desire to do the best I can financially for my wife and child, and a selfish reluctance to return to the sort of job I never particularly liked. Particularly as this would almost certainly involve relocating from my house in Northumberland, with its matchless views. How likely is it that I could ever find anything to compare with it in the North West? Here we could keep chickens, grow vegetables, and I could write books. I have to acknowledge that this is theoretically what I should have been doing for the last five years, and have done sod all about it, but it remains an alluring if almost certainly unremunerative possibility.

I went for a business meeting in Newcastle this morning and was pleased to get through it without, I believe, making a complete tit of myself, given that I was suffering from a pretty high level of sleep deprivation. This caught up with me when I got home, and I devoted the rest of the day to looking and feeling exhausted. A condition beautifully captured on camera by the friend who called at teatime to inspect The Baby, bearing generous gifts. 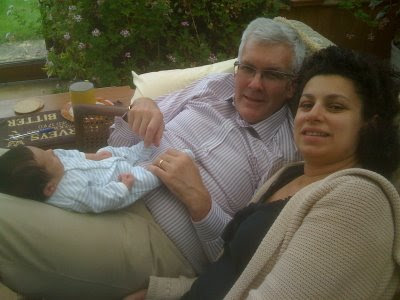 The Baby asleep, with parents clearly wishing they were, too

The friend seemed touchingly impressed that the proprietor of the local toyshop had known who I was, when she called there to buy a teddy bear, and reassured that this was because he was a regular reader of my newspaper column rather than because he had spotted me hanging around on the pavement outside, behaving suspiciously.