House sales: the case against

15st 0lb, 3.0 units. I am a bit depressed about my weight. Can I blame it on the cheese after lunch yesterday, or the cake at teatime? Or maybe there is just an element of non-dehydration after an uncharacteristically alcohol-free evening at home? My mood was probably not improved by The Baby’s refusal to go to sleep after the second of his feeds in the middle of the night, even after I had him on my knee for the best part of an hour reading him a clear statement of his rights and responsibilities.

Still, all this was as nothing to the effect on my morale of having two groups of people view my house in the course of the morning. The first couple pitched up on the dot of 11, as arranged. “One of your lot!” I called excitedly to Mrs H as a spanking new Land Rover Discovery growled up to the back gate with an Asian bloke at the wheel. His wife proved to be a very PLU rah-rah-rah jolly-hockey-sticks English type, and they were accompanied by a shy daughter of four or five who made it clear that she did not like dogs much, and a French woman of 20 or so who was “just visiting from Paris”, presumably because they thought that someone in deeply rural Northumberland would not understand the words “au pair”. A further two-year-old boy was either left in the car with the engine and air conditioning running, or was a pure figment of their imaginations.

I gave them my most positive tour of the place, beginning with the magnificent views and the land, then the old forge I use as a garage, and concluding with the house proper. It turned out that they were particularly interested in knocking through from the upstairs bedrooms to the adjoining attics, as they did not want to have small children sleeping far away from their own room. A reasonable enough aspiration, and the wife’s face fell as though she had just made a clumsy lacrosse pass when I said that it would probably not be technically possible. Apparently my estate agent had given her precisely the opposite advice. I congratulated myself on yet another triumph of salesmanship by the most experienced PR practitioner in this and several neighbouring parishes. I tried to cheer her up by reporting that another viewer was due at 12 and was bringing a tame builder with him to advise on this very point, and no doubt my agent would be able to share his verdict with her.

I had The Baby on my knee in the conservatory when the front door bell rang some time after noon, prompting me to wonder what sort of idiot seeks entry to a house in rural Northumberland by going to the front door rather than coming round the back like everyone else. I soon found out. Enter a tall, thin, dark, balding man with a well-trimmed stubble beard, who was clutching a copy of the marketing brochure for the house and was joined shortly afterwards by his threatened builder, who at least had the sense to drive up the lane to the side of the premises.

Having expressed some mild suspicion about the nature of my arrangement with my neighbour about his vegetable plot on my land (“A licence???”) my visitor really hit his stride when we got indoors and he began asking the builder if he could deliver what was wanted: the kitchen and downstairs bathroom knocked into one large room, the ceiling raised and additional windows inserted into the north wall. The answer was “no problem”, though the scale of the work would be vast given that the two rooms are separated by a serious (but apparently not structural) stone wall.

We then progressed to the reception rooms, where the potential purchaser waved his arms around and said “I just wish I could see this place EMPTY!” i.e. without all this dreadful old junk cluttering it up. Needless to say this did not make me feel any warmer towards him. Upstairs we explored the other key question raised during his wife’s tour of the house with my agent last week, namely whether it would be possible to knock through from my bedroom to the adjoining attic to create another bathroom to replace the one she was intent on destroying downstairs. Once again the answer was “no problem”, though it would mean removing the fireplace and a fair chunk of the chimney breast; again “no problem” since the new occupants would need only one flue from the single fireplace they wished to retain on the ground floor. Given that they clearly do not much care for real fires, it seemed increasingly strange that his reaction to the gas stove in my garden room was “Would it be possible to convert that to a genuine log burner?”

My visitor helpfully pointed out that, unless one knocked through from the bedrooms, the attics would remain useless for anything but storage. “Unless,” I pointed out, “you wanted to have something like a model railway.” He repeated my words back to me with a sneer. When I asked whether his builder pal was confident of getting Listed Building Consent for his proposed alterations, he said that would be “no problem”, naturally. He said the same about replacing a redundant front door with an additional window. When I pointed out that this had been the one aspect of my original proposals refused Listed Building Consent when I bought the house in 1988, he sneered “It depends who you ask”, and I cannot swear that he did not tap his nose as he said it.

We then moved on to the old smithy to the rear of the house, and the builder swiftly concluded that it would be “no problem” to convert it into a “holiday let”, though sadly such details as the old forge and bellows would have to go. (“You could not keep that as a feature. That’s the size of some people’s bathrooms.”)

As we were mercifully concluding our conversation, I asked my visitor why he was so intent on enlarging the kitchen by undertaking such major structural work, when it would surely be easier and cheaper to expand it into the adjacent conservatory, perhaps enlarging this in the process. This is something I have often contemplated myself, since the one thing I feel the house lacks is a kitchen large enough to sit in by an Aga or similar, while the conservatory has the finest views in the house (indeed, I would argue, one of the very finest views in all England) and is consequently the room where I spend more time than anywhere else. My visitor stared at me blankly and said “Oh, that. We thought we’d knock that down and just build a porch.” When I drew his attention to the absolutely stunning view he sneered that they would be sure to bear that in mind.

By the time these two had left it was a toss-up as to which of them had captured the coveted title of the visitor I have most disliked during my 21¾ years in residence in my current home. Which is saying something, against the stiff competition offered by ex-girlfriends and their unwanted guests, double glazing salesmen, Jehovah’s Witnesses and canvassers for the Labour Party. The potential purchaser’s parting shot was to sneer “Been on the market since January, hasn’t it?” presumably as the opening salvo in case he should decide to submit an insultingly low offer. But by that stage I was utterly determined that I would refuse it, even if he made one at the full asking price.

The day just went on getting better when I drove into Alnwick to collect the dinner suit I had left at the dry cleaner’s on Thursday, only to be greeted with some cock and bull story about it not being ready as I had dropped it off only that morning. A ticket timed at 8.30 a.m. today was brandished before me, as though this would prompt me to remember that I had in fact driven into Alnwick first thing, rather than having a lie-in. It did not work. 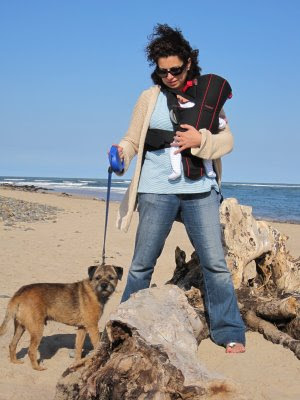 The high point of a lousy day: Wife, Baby, Dog, beach
Fortunately a leisurely walk along the estuary and beach at Alnmouth, and an ice cream from the van in the car park, did something to restore my good humour and remind me why it would not be a good idea to relocate permanently to the North West, particularly at the cost of placing a rather charming listed house in the hands of determined wreckers. It would be like putting a vintage Bentley that one has spent two decades nurturing and polishing into the Government’s scrappage scheme.

Email ThisBlogThis!Share to TwitterShare to FacebookShare to Pinterest
Labels: Alnmouth, baby, depression, dry cleaner, listed building consent, no problem, one of your lot, People Like Us, tosser (complete)