The inexorably falling stepladders of doom

15st 2lb, 7.0 units. Despite feeling absolutely awful after a night wracked by indigestion, I was at least still fired up with enough passion about my experiences of Saturday to dash off a newspaper column on the subject without the slightest of difficulty.

There then ensued a ludicrous interlude in which I had to enlist Mrs H’s help to move a heavy geriatric’s electric reclining chair out of the sitting room and into the back of my car. This state-of-the-art aid for the crippled had been purchased by my late uncle when he was in the final throes of Parkinson’s disease, and I had taken it off my aunt’s hands when she said that it depressed her having it around. Despite periodic ridicule from visitors for possessing such a thing, I found it the most comfortable reading chair I have ever possessed. My other chairs all lack the right degree of lumbar support and, whenever I adopt the alternative strategy of lying down on the sofa to read, I invariably fall asleep. Still, the fact that I have only had time to read one book since I met Mrs H (as she then wasn’t) in April last year meant that its undoubted value for this purpose did not seem to count for much when weighed against the fact that my aunt has an ankle injury and has been enjoined to keep her leg up at all times, in which the chair would be of the greatest help to her if she ever actually bothered to sit down. So I concluded last night that she should have it back.

Being a prudent sort of chap, I had naturally measured both the chair and the car before we started, to ensure that the former would fit into the latter. And my tape measure said it definitely would. So I was more than a little miffed when we finally heaved it up onto the tailgate and it wouldn’t go any further. Particularly considering that the sky was already black above the Cheviots and an almighty clap of thunder had just sounded over Ingram, or somewhere else reasonably nearby.

Did I panic? No, I switched on my brain and reflected that it was an electric chair, and so capable of adjustment with the aid of its own motor if only I could supply a suitable power source. So I raced out to the smithy for my extension cable, swiftly yanking it free from some obstacle or other which proved to be an aluminium stepladder propped against the end of an old wardrobe. As I did so, I heard the distinctive sound of an aluminium stepladder bouncing several times along the blue metallic wing of the hitherto pristine Vauxhall Astra convertible which I keep parked in the smithy, and which I had arranged to trade in against a new car for Mrs H. Luckily I did not have time to do a traditional dance of fury before the rain arrived, so just got on with adjusting the chair and closing the back of the car before the heavens opened.

After we had delivered the chair, we called upon some friends for tea. Serendipitously he is also an old git with a much younger partner and a baby, albeit some 5½ months older than ours. 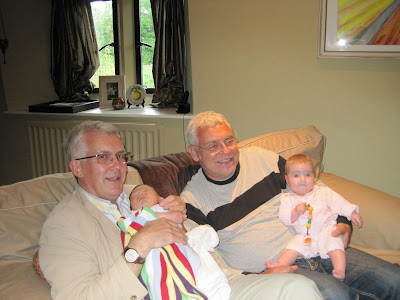 Old gits comparing babies;
or babies comparing old gits?
The highlight for me was the discussion about resemblances, with mother saying that the baby definitely had her father’s forehead, and father adding that she also had his sense of humour. To which mother retorted swiftly “What? None?” Definitely the best line of the afternoon.