A cleaner for the corvids

14st 13lb, 7.5 units. I did not have the energy to stay awake yesterday evening, let alone to eat supper, which was at least helpful on the weight front. Today I took some much-needed, moderately vigorous exercise, cleaning out a paved area in the middle of my row of stone sheds that was once the half-walled repository for ashes and the contents of the two earth closets on either side of it. Lovely. Latterly this area has been opened up and has served me as an overflow wood store, specializing in those logs which are too large to fit into my wood-burning stove and which I am too lazy to chop up. In fairness to me, most of them fail to respond in the expected way when struck with an axe. Far from cleaving neatly into segments like they always do in the movies, these lumps of apparently fossilized timber remain as whole as though they were made of mild steel, merely sending a jarring recoil down my arms and making me fear that I may shatter into tiny pieces, like a character in one of those Hanna & Barbera cartoons of extreme animal violence.

At least a decade’s worth of autumn leaves had blown in and accumulated among the logs, and to cap it all a pair of particularly demented jackdaws had spent most of last spring energetically cramming twigs and other nest-building material into the eaves, in a space which might have been big enough to accommodate a tit or an anorexic sparrow, but was clearly never going to work for a pretty substantial and very dim corvid. In consequence most of their material had tumbled down to add to the spectacular mess on the ground. I felt much better when I had cleaned it all up and stuck it in bags for the tip, and taken some photographs of the house in the sunshine. With any luck these will prove rather less off-putting to potential purchasers than the perhaps somewhat forbidding external shots captured by my estate agent in January. 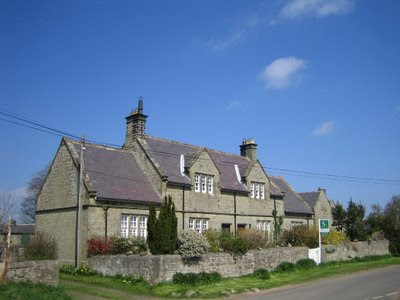 A perfect Spring day to be selling a house 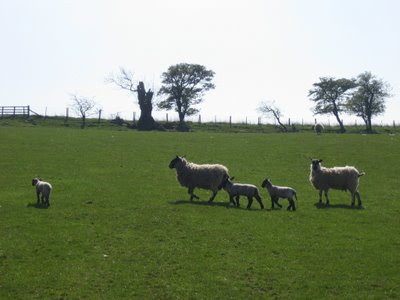 Sheep may safely gaze: so long as the dog's lead holds

After lunch and a walk, enlivened for the dog by the presence in the surrounding fields of many sheep and lambs which were clearly up for a spot of chasing, if only we would let him off the lead to play, we drove to the Alnwick dump (sorry, Household Waste Recycling Centre) and then back to Chester. As we were driving out of the tip I turned on Radio 4 and caught one of the most astonishing statements I have ever heard even from Tony Blair, in a documentary about his “Faith Foundation”: “I'm really and always have been in a way more interested in religion than politics.”

Well, that explained a lot about his approach to politics, I thought, and it provided an instant solution to the nagging weekly question of what I was going to write about in my newspaper column tomorrow. The really worrying thing is that the man clearly does not understand the purpose of religion any more than he grasped politics, Parliament and the British constitution. He seems to think it’s all about making life on Earth a little more agreeable and helping us all to get on, so that the way forward is to get “young people of different faiths working together” on something vaguely socially useful, in this case the eradication of malaria in West Africa. Which is no doubt a perfectly fine thing to be doing, but has surely got sod all to do with religion. Which, if you happen to believe it, is all about accepting that this world is but a passing shadow, and how to get to Heaven.