15st 2lb, 7.0 units. I did not eat all of last night’s two steak pies personally, but I might as well have done judging by my weight this morning. I don’t suppose the splendid homemade summer pudding, cheese and biscuits or chocolates exactly helped, either.

Still, I was much heartened at ten o’clock by reading a text message from a friend in Brighton, who was reading his newspaper on the seafront when he noted that the bench on which he was sitting bore an inscription in memory of one Neil McArthur “A champion of people with dementia. Never forgotten.”

Well, it made me laugh.

While still suffering grievously from the effects of excessive food consumption, Mrs H and I somehow pulled ourselves together sufficiently to make our way to lunch at the remote cottage of a friend who lives at the end of a mile or more of rough track in the middle of nowhere. I had seen photographs of the place, which whetted my appetite, but had never actually set foot there before. It did not disappoint. Despite being in the back of beyond, our hostess had managed to find some frightfully distinguished fellow guests who had made their way there on foot, and had not completely exhausted themselves in the process. With my usual lack of discernment and tact, I completely failed to appreciate how frightfully distinguished they were, and was about to embark on a joke of truly staggering political incorrectness when I was brought up short by a sentence beginning “When I delivered the Reith lectures …”

I immediately caught Mrs H’s eye and knew that I had to remain on high alert to prevent her from asking whether he was interested in flowers in general, or just specialized in wreaths. It must have been the resulting stress that led me to eat so much of the delicious buffet luncheon spread before us, in defiance of all my resolutions. 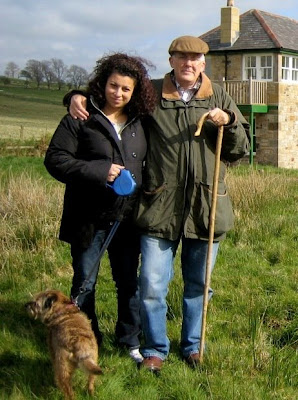 Not actually a signal box: Nowhere, Northumberland
When the danger had passed, our hostess led Mrs H and I, with our grateful dog, on a beautifully peaceful walk along the abandoned railway line that runs beside her house, and I then allowed Mrs H to drive me home. We agreed that it had been a most agreeable day, though it was a bit of a shame that neither of us could actually summon the energy to go to the evening drinks party in a historic country house I have always vaguely wanted to visit, and around which our entire weekend in Northumberland had been planned.