No idea (probably just as well); 10.0 units. A sunny day in London with nothing in particular to do. So we went for a walk around St James’s Park, as we often do when we are in the vicinity and the sun is shining, and carried on to the old War Office so that Mrs H could fulfil her primal urge to stroke a horse’s nose. As you would expect, I made a joke about feeding the pony which do not go down particularly well once I had explained it. 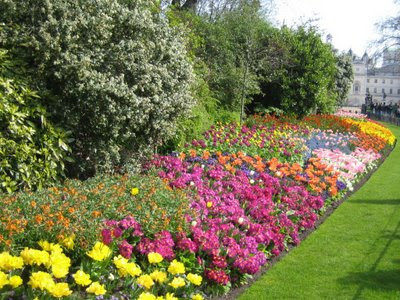 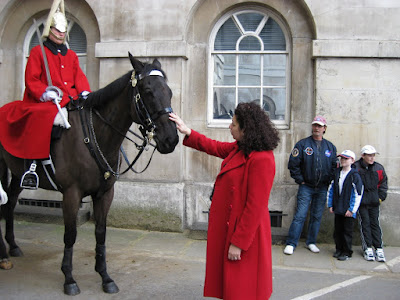 Not feeding the pony: Mrs H on a previous visit to Horse Guards
(note the colour co-ordination)

Then we wandered on into Covent Garden and enjoyed the sunshine on the drinking terrace above a pastie shop, watching a Geordie escapologist entertaining a large crowd on the piazza below. I reflected that I was a sort of Geordie escapologist, too, though this one performed a much more concise and infinitely more watchable routine than wasting six years at Cambridge and going to work in the City. However, it has to be said that the speed with which he wriggled out of his padlocks and chains was nothing compared to the magical way the crowd evaporated as soon as he descended from his stepladder to take a bow and tried to start passing a hat around. The tight southern bastards.
Mrs H said that she really fancied an Italian for lunch, but there were no suitable men around so I decided to take her to an eating establishment instead. I strode confidently in the direction of that reliable old favourite, Luigi’s in Tavistock Street, only to find it closed and converted into a fantastic A3 restaurant opportunity. So we went Turkish instead: a delight but for our waitress’s all too apparent need of a bath. Boom boom, as Basil Brush might well have said. 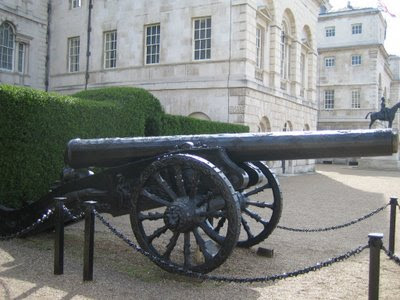 Continuing the day's Turkish theme: a captured gun of 1524 (apparently)

I forgot to mention two really good things that happened yesterday. The first was Mrs H taking me to an expensive shop in Jermyn Street and buying me a lovely, spotted silk handkerchief, though admittedly this was only a replacement for the one she had lost from my top pocket somewhere on Chester station when I foolishly allowed her to take temporary charge of my coat. Even better, while we were standing in whatever the Floral Hall is now called having a drink before the ballet, I checked the BBC News website on my phone and found that Mon Mome had won the Grand National. Which was handy, as it was the very horse Mrs H had drawn for me in her office sweepstake. I envisaged something rather grand, like the old Stock Exchange sweepstake which used to be worth tens of thousands of pounds. One of my erstwhile colleagues famously gave himself a heart attack while cheering on his horse, which was leading the field at the time. It turned out that I had only won £40, but it felt like it might be the start of a roll.

So all in all it was far from a bad weekend, and it is hard to explain why the Black Dog of depression should have emerged from his kennel and given me such a terrible savaging this evening. Perhaps it had something to do with my sheer terror at impending fatherhood, and the miserable uncertainty of where we are going to bring the little lad up. Grade II listed house with fine views of the Cheviots: you clearly need to be much more than a run-of-the-mill Geordie escapologist to get out of that.