Class, ruthlessness and a step too far

14st 10lb, zero units. I have taken the radical step of recruiting a cleaner. Since I was a fledgling booted off my parents’ perch 37 years ago, I have nearly always done my own housework, mainly because my rather obsessive-compulsive nature means that it is quicker than spending hours looking for the things that any cleaner would inevitably move in the course of tidying up. Or, God forbid, throw away. I employed a cleaner for a while when I moved into my current house in Northumberland, at the behest of the woman who initially shared the place with me. But the only things said cleaner really put her back into were going through the fridge and kitchen cupboards chucking things out, which drove me half mad; and doing the ironing, which is the only domestic chore I really rather enjoy. How else is one to fill the time while one’s mind is focused on the weekly Archers Omnibus?

True, in my day, Cambridge colleges employed bedmakers who came around each day to do just that, but I don’t remember an awful lot of actual cleaning going on. My chief memory is of a Scottish lady called Margaret who would come to my rooms each morning, put her feet up and smoke my cigarettes while having a cruel laugh at such evident shortcomings as my continuing virginity.

Anyway, it’s a long time since I employed a cleaner. I could not face getting involved in anything as potentially demeaning to the recipient as creating a direct cash nexus, so I found (all right, Mrs H found) an agency and we signed them up. I have clearly swallowed enough BNP propaganda to assume that all domestic work these days was performed by East European immigrants, but in fact this outfit seems to specialize in PLU (People Like Us, do try to keep up) mothers who want to earn a bit of cash on the side and don’t much fancy the sex industry. The lady who turned up this morning was a nice, well-spoken dog- and cat-lover (which was handy) and she was joined for a while mid-morning by another lady in a smart black trouser suit who was distinctly more upmarket than I am (not that that is saying much). I naturally took her for some sort of supervisor, and was surprised to find her on her hands and knees shortly afterwards, energetically scrubbing my lavatory. And slightly ashamed too, if the truth be told. I don’t think I am cut out to be an employer of domestic staff.

In the late morning I went to sit outside to write some thank you cards while my study was being hoovered, and was gratified when a couple of young male inmates from the Scratters Academy arrived in the alley on the other side of the garden fence and noisily lit up fags; not by the fact of it, obviously, but by the way a single Jeeves-like cough from me led to them vanishing silently, as though they had never been. If only this could be a permanent rather than a temporary effect.

I could not think of a nicer way of passing St George’s Day than walking along the banks of the River Dee to Eccleston in the warm afternoon sunshine. As I admired the picturesque village my eye was caught by an old ruin behind the church, which proved to be a fragment of the previous building. This had been demolished in 1900, according to an almost illegible plaque by the gravelled plot where they had re-interred all the members of the Grosvenor family previously buried in its vault between 1599 and 1894. I wonder whether this rather ruthless approach to history (and, perhaps, to other things) is the key to the family’s success in holding onto and increasing their vast wealth? There were hints of it, too, in the modernistic tombstones favoured by some latter-day members of the family. One Duke of Westminster who died in the 1960s was commemorated by what looked like a long, black sword driven into the ground, with a vertical inscription down its blade. More than likely this was the same forward thinker who had the nearby family seat of Eaton Hall demolished and replaced by a more manageable modern house; a place allegedly so reminiscent of an airport terminal that the present Duke’s friend Johnny Hesketh presented him with a BA flag to fly over it, at least according to his most entertaining obituary in the Telegraph last year. 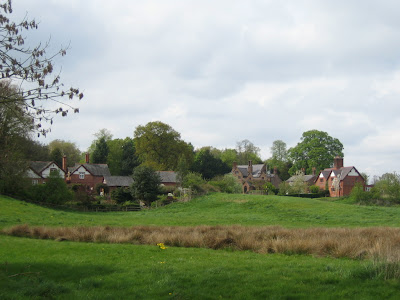 Drawn to ducal seats: not Alnwick, must be Eccleston

This evening Mrs H took me out to I thought was going to be a minor Cheshire stately home with the unlikely name of Cabbage Hall, but which proved to be just a pub. This was the venue for the pre-season Drinks Party of the Cheshire Polo Club. I am not sure I was a great social success, to put it mildly. Mrs H took me home after I was overheard in conversation with a building contractor friend of hers who claimed to have detected some similarities between my character and that of Josef Fritzl. I retaliated by saying that I could see little point in asking him to come around and excavate a cellar at this stage, given that the baby we are expecting is a boy, but that he should definitely watch this space. I think I might have gone one step too far.