Did the earth move for poo?

14st 10lb, 4.0 units. Life just goes on getting better and better. Last night I helped Mrs H to make the final adjustments that were required to relocate the cat’s sleeping quarters from our double bed to a rather smaller but more appropriate cat bed in the utility room downstairs. This should enhance our chances of sleep in two ways: first, we will not have the cat walking over us in a nightly bid to secure her favoured sleeping position on top of Mrs H’s head; and, secondly, we will not be woken by an unbelievably foul smell in the early hours of the morning when the cat responds to her usual, ill-timed call of nature in the litter tray in our en-suite bathroom. The resulting miasma defies description; but you will probably get a reasonable idea of how bad it is when I say that the cat herself normally discovers an urgent need at this point to make her way downstairs and commune with the dog, whom she can’t stand.

It all worked according to plan until 5.30 a.m., when the cat evidently answered a call of nature in the litter tray in the utility room, and made frantically noisy attempts to escape from the consequences. If we had been in central Italy rather than Chester, I would have taken it for another earthquake. I half-heartedly endeavoured to suppress a wicked smile as I turned over and went back to sleep. 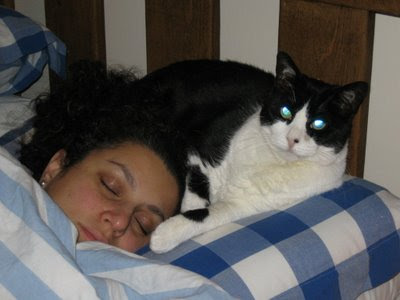 Mrs H and her original and protective nightcap

Meanwhile, urban life reached what seemed to be a new low point this lunchtime when I looked out of the window and saw three female teenagers from the Scratters’ Academy sitting in a circle on the ground, blocking the pavement opposite the house, with their feet in the gutter and a feast of chips spread out on papers before them. Such style, such elegance. It’s like living on the set of Slumdog Millionaire. They made a noisy exit after a bit, leaving the papers and a fair proportion of the chips behind them. I wonder what, if anything, they do teach them at that school?