15st 1lb, 7.0 units. Reasons to be cheerless, part 364: the start of a no doubt hideously expensive new tax year, rampaging obesity, and the fact that I discovered on the internet last night that each and every house Mrs H and I rather fancied when we took a preliminary look around the Cheshire market before Christmas has since sold. Whereas in Northumberland ...

At least my resulting state of misery should have helped me to recapture my traditional tone of voice in my weekly newspaper column, which focused on the EU Data Retention Directive (which takes effect today, apparently) as a further symptom of the tightening tentacles of the surveillance state. How can we have stumbled into this mad parallel universe where innocent trainspotters are being bundled out of stations for daring to use a camera, at the same time as Google are cheerfully and legally constructing a door-by-door illustrated burglars’ handbook of the whole country? (Memo to British Transport Police: if he smells a bit odd, wears glasses held together with Sellotape, has a huge Tupperware box full of sandwiches and a copy of the Railway Magazine sticking out of his anorak pocket, he almost certainly isn’t a terrorist).

Having filed my column and walked the dog, the only thing to do to alleviate my misery was clearly to plod across the Old Dee Bridge and have a slap-up lunch in my favourite pub, which has raised its game still further since my last visit by embracing the sale of pork scratchings. But even these did not bring a smile to my face, and the fish and chips seemed to be distinctly below the usual standard as they turned to dust and ashes in my mouth. So clearly it is time to look back to much happier times. Particularly as this will also permit me to satisfy the curiosity of those correspondents who have asked why I have posted no honeymoon pictures to complement those of my wedding.

The good news for you, sleazeballs, is that Mrs H spent much of our week in Venice staring at the ceiling. The less good is that they were the richly decorated ones of the city’s magnificent Baroque churches, rather than the one in our bedroom. Here is a summary of what we did on our holiday:

Monday: foggy. I managed to leave my wedding ring behind in our Heathrow hotel, and spent much of the day writing a slide presentation for a client. I could sense Mrs H thinking “some honeymoon, this”.

Tuesday: foggy and damp. Still knackered after the wedding and the shock of actually having to do some work yesterday. After a preliminary orientation tour we plodded to a hard-to-find but highly recommended tratorria on Giudecca that proved to be closed on Tuesdays, and consoled ourselves with a bargain lunch in our five star hotel that proved to be anything but. 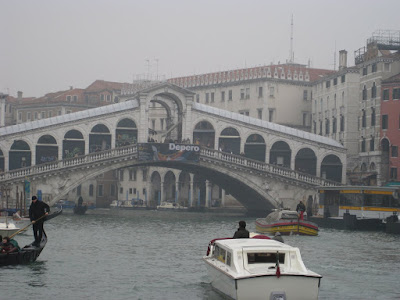 An orientation tour by vaporetto: weather more Despero than Depero

Wednesday: wet, but at least we finally made it to St Mark's, where it was dry inside. And the trattoria on the Giudecca was open on Wednesdays and every bit as good as billed. Afterwards we hopped off the vaporetto at S Giorgio Maggiore where a compatriot who was clearly an even bigger idiot than I am called “Come on, be British!” as Mrs H and I debated whether it was really worth taking a photograph of her in the torrential rain. 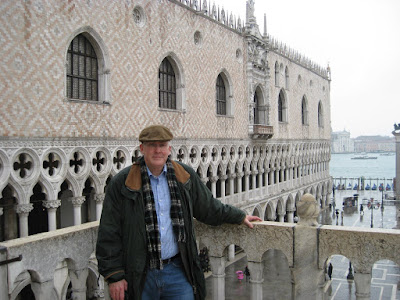 It was this or the fake bronze horses: one fat Englishman at St Mark's 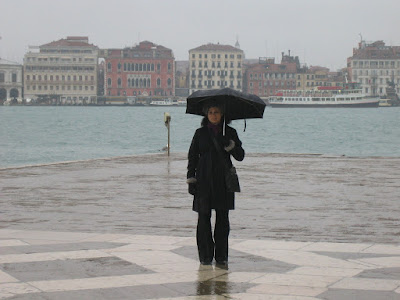 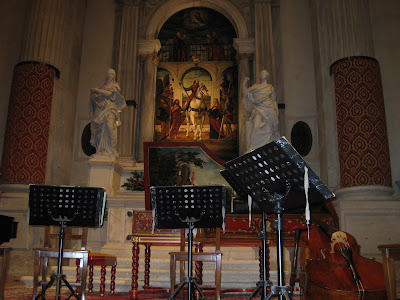 Thursday: still decidedly damp. We got so fed up with sight-seeing in the rain that we went back to our hotel in the afternoon and ordered two cups of hot chocolate and two small slices of cake in the lobby. Certainly, sir; that will be 80 euros, please. The price of everything in Venice, it appears, apart from the public lavatories. Which are €1.50, or 30 bob in real money. It's lucky we had my mother cremated, or she'd be turning in her grave. In the evening we went out to what I thought was a highly recommended, Michelin starred restaurant called Da Fiore, to which we had been directed by the same genius who came up with Altanella on the Giudecca for lunch yesterday. It was one of the most expensive meals I have ever eaten, but so enjoyable as to be worth it. The irony was that we subsequently discovered that my friend had been trying to recommend a dirt cheap trattoria called 4Feri in a completely different part of town. 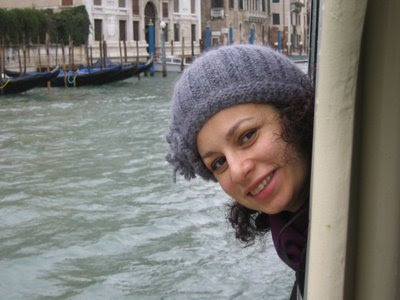 Friday: sunny. So we took the boat to Torcello (always lovely, and moving with it) and Burano (always pretty, and good for a decent lunch). Then, attempting to walk back from Fondamente Nove to our hotel in a thoroughly cheapskate sort of way, I found myself seduced into fulfilling Mrs H's wish to take a ride on a gondola (a ghastly tourist cliché I have taken care to avoid on all my previous visits). It cost €80, naturally, pretty much regardless of destination. In the evening, for another €80, we went to see a few popular operatic arias performed in a palazzo by a rather attractive young soprano with a large chest, partially covered by a frock with no visible means of support. This positive impression was offset by having her paired with a tenor who simply could not sing a note. I think they must have found him on Italy's Got Talent, probably fronting a novelty act involving seals or dogs. As soon as he opened his mouth two fat lesbian ladies sitting near us burst into uncontrollable laughter. One attempted to contain her mirth so as not to unsettle the lad and make things even worse (as it that were possible), but her companion simply hooted hysterically every time he opened his mouth. This cabaret alone fully justified the price of admission. 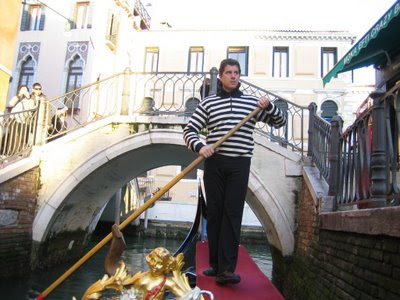 Our gondolier thinking moodily of his 80 euros 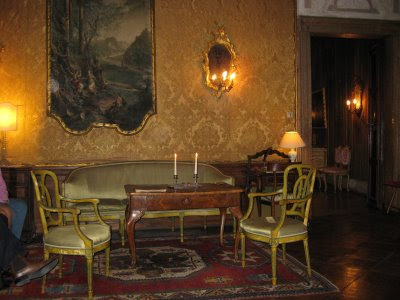 The palazzo with the tenor with a difference

Saturday: gloriously sunny. So we went out early (albeit not early enough) and took the lift to the top of the campanile of St Mark’s, so that we could get some standard tourist shots of Venice into the can. At lunchtime I allowed Mrs H to indulge her long-standing wish to take me for lunch in an unassuming bar rather than an expensive restaurant; it was truly horrible. The popular opera at a Scuola Grande in the evening was another horrid tourist trap, but at least the participants could all sing. 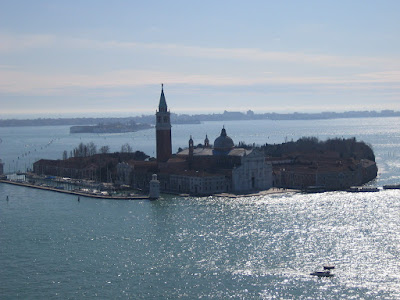 All right, I give in: a standard tourist view from the top of St Mark's campanile 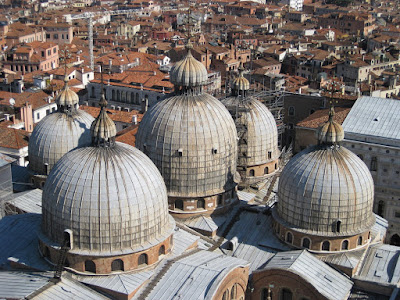 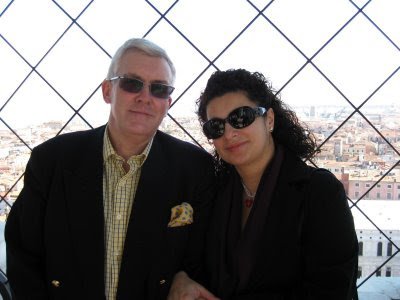 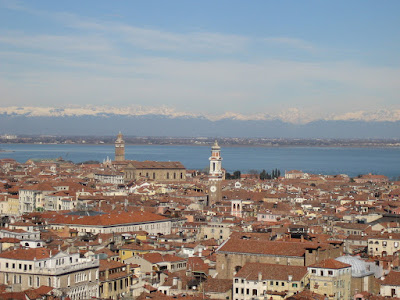 City, lagoon, Alps: what could be more agreeable? 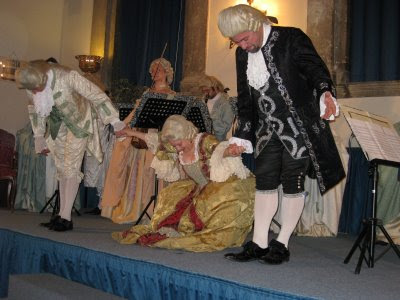 A rather better attempt at a Baroque musical performance

Sunday: sunny. By now the model of an indulgent husband, I acceded to Mrs H's wish to see the glassworks of Murano, even though everything ever produced on Murano is perfectly hideous, and most of the stuff is now imported from China anyway. After watching some bloke make an €80 glass fish for the benefit of the tourists, we spent a regrettably long time in ghastly shops, being hustled by spivs. Then I asserted myself and dragged us back to Venice to do something I wanted to do, viz having lunch in Harry's Bar. This did not cost €80. One may legitimately question whether it is worth it. But I always feel that it has to be done. 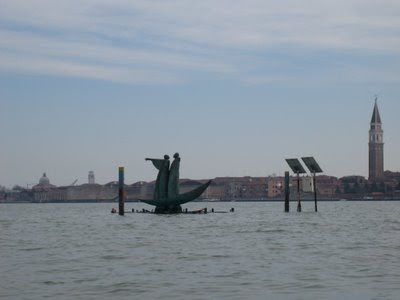 Venice's answer to an Anthony Gormley 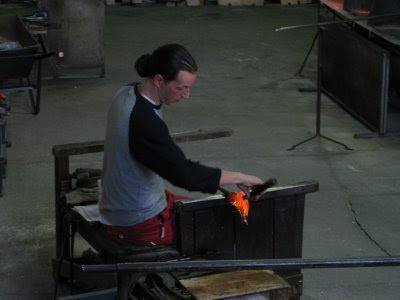 Making something absolutely hideous on Murano

Monday: dull, softening the blow of having to go home. I was reunited with my wedding ring at the Heathrow Sofitel (not just the quietest airport hotel I have ever stayed in, but the quietest hotel anywhere). Which was nice. More so than having my car delivered by the valet parking company, as it turned out that the people who had taken it off our hands last week were not the organization I had pre-paid for the service, and this lot naturally expected to be paid again. Perfect. Still, we felt much more relaxed after a week in a place of great beauty, where everything progresses at walking pace. And we had learned quite a lot about each other. Yet we were still married, and neither of us excused ourselves to ring a lawyer as soon as we were back on British soil. I regarded this A Result. 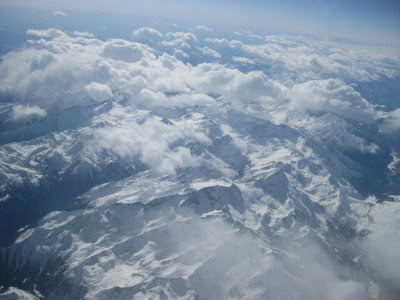 On our way home