A series of pleasing discoveries

15st 1lb (Northumberland scales, no longer a fair basis for comparison), 11.1 units (sadly accurate). Yesterday was one of those days that unexpectedly gets better and better, which was handy as it got off to a thoroughly lousy start when the alarm went off at 7.30 after not nearly enough sleep. I suppose we just have to keep telling ourselves that this sort of thing is an excellent preparation for parenthood.

We drove to Alnwick in convoy so that I could leave my principal car at the garage for the replacement of a rear light, which had been broken when Mrs H backed it into a concrete post a couple of weeks ago to see what would happen. I laughed in a good-natured way even as I was paying the bill for £165 later in the day. After all, you can’t put a price on gaining this sort of invaluable driving experience. Though come to think about it you can, and it’s about the same as a top-of-the-range ticket to Glyndebourne or Covent Garden. I know which I prefer, and wonder how Mrs H will react when I next take myself off to an opera on my own, handing her a photocopy of the garage invoice in lieu of her ticket. Though of course she wouldn’t be able to accompany me anyway because of the baby, so it’s really not going to be any sort of sacrifice.

In the meantime we nipped down to Newcastle to visit my favourite picture framer with some Disney postcards for the boy’s nursery, and to buy Mrs H some nursing bras from M&S. She had actually gone into M&S in Chester to buy these a few days ago, but in a brilliant feat of counter-salesmanship one of the staff had put her off, telling her that she should not be buying bras that fitted her now as her measurements would change after she had delivered the baby. Which may well be true, but leaves her with the problem that she still needs something to wear that will be suitable for breastfeeding as soon as the baby is with us, and it is not exactly going to be easy to nip out straight to M&S from the delivery room.

We returned to Alnwick, collected the car and drove home for lunch, after which we called on my next-door neighbours to present them with a copy of today’s local newspaper, as an all too transparent cover for our attempt to scrounge some of their superlative free range eggs. At this point we made the welcome discovery that that the note from the courier found on my mat yesterday should have said “Parcel left NEXT door” because they had been kindly looking after it for a fortnight. The well-wrapped package proved to contain a long, handmade, ceramic dish with turned-up ends, which doubtless has some significance in Maori circles. On the one hand no immediate purpose for this suggested itself, but on the other hand Mrs H I both really liked it. So no need to dissemble in our “thank you” note, then. Which is nice.

We did a rather bad and wrong thing after this in that we had arranged to meet our friend Mr X [not his real name] in a seaside pub at 3, but did not leave home until nearly then. I justified this to myself on the grounds Mr X and his usual companion Ms Y [not her real name, either, though it could be as she is the questioning sort] have never knowingly been on time for anything, ever, and that in any case there could hardly be a better place for them to entertain themselves than in a pub. I annoyed the bloke driving out of the council car park when we finally arrived by failing to stop and accept his offer of a used all-day parking ticket, but I did not actually need one as I have crazily lashed out £110 on a 12-month parking permit from the spanking new, unitary Northumberland County Council. So far I have had it for two and a half months and saved myself a whole 140p. Plus about £250 worth of annoyance in not actually having the right change for the almost inevitably non-functioning ticket machines.

When we reached the pub we were surprised to see Mr X sitting on his own at a table in the sunshine outside, and judged from a glance at the level of his pint that he had probably actually turned up on time. We realized at this point that we had simply assumed that he would be coming as part of a package with Ms Y and her lurcher, without ever bothering to check whether that was in fact the case. I joined him in a pint of some home-brewed ale called, if memory serves, “Ship Hop” (geddit?), because it would have been Rude Not To, while Mrs H bought and consumed rather a lot of crisps. Then we walked along the beach, deploying two squeaky toys in lieu of the expected canine playmate so as to give the dog a run while averting the usual problem of his attention wandering towards someone more interesting (defined as anyone at all apart from us) and attempting to invite himself home with them. 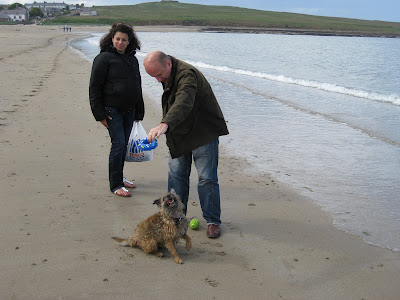 Mrs H, Mr X, the two squeaky toys and The Dog
(why on earth couldn't Mrs H have chosen the Fortnum's bag?) 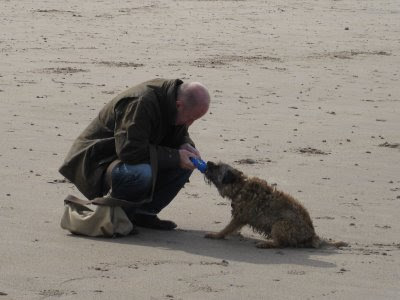 A tussle to the death between Mr X and The Dog
(though fortunately, on this occasion, death was averted)

After a reasonably scenic drive home I positioned Mrs H and Mr X in the conservatory with instructions to keep a close watch on the swallows’ nest, while I got on with watering my house plants before they expired. My conscience had been troubling me all day, after I got out the stepladders this morning to check on the nest and found a row of open beaks gawping at me; my feelings were further pricked when we returned at lunchtime and I found a dead fledgling on the ground beneath. I was much relieved when my observer team reported a steady traffic of insect-bearing adult swallows in and out of the roof space. It seemed to more than justify having a drink or two with dinner, which will be where things started going seriously wrong on the alcohol count.

Today we had a leisurely day, during which just about my most energetic achievement was doing the ironing accumulated over several visits while listening to The Archers Omnibus and Denis Healey on Desert Island Discs. Then in the late afternoon we loaded the car and drove back to Chester for what promises to be a very interesting week.