The most important day of my life

15st 4lb, 7.7 units. So this is it, then: the most important day of my life. Probably, as they always say by way of qualification in the Carlsberg ads, since we had been warned that the process of inducing a baby could well take more than 24 hours. Nevertheless, I was keenly aware, as I heaved myself out of bed at 6.30 a.m., that there was at least the possibility that I could be a father by the end of the day. Though at the start of it I felt much more like a mother, marvelling at the bouncing baby-sized eight pounds I had apparently gained in just 24 hours. How could a labour-inducing curry and a mere three pints of beer possibly wreak such havoc? It seemed even more incredible than the miracle of human reproduction.

Our last remaining lifeline was the call that Mrs H had been instructed to make as soon as she got up, to see whether the labour ward at the hospital had room for her. But they said they did, so we readied ourselves with our customary calmness (and dilatoriness, in Mrs H’s case) and made our way to the hospital, where we were shown into an “Assessment Room”: a decent-sized space which even seemed to be moderately clean by NHS hospital standards. At this point we remembered that we had forgotten to bring the pillows we had been advised to have with us, as they are “like gold dust” in the hospital. Apparently the scratters steal them.

Q: You need a couple of pillows for your bed. Would you:

Is (d) your final answer? Are you sure? Then I am sorry to inform you that you are a scratter who will make the King of the Scratters himself jealous at the epic extent of your scumminess.

A pleasant midwife came in and linked Mrs H up to a couple of monitors – one for the baby’s heartbeat, the other for contractions, if any. Her mother, who had joined us as Mrs H’s chosen “birthing partner”, then performed some strange Persian ritual which involved waving a small book around in front of Mrs H and getting her to kiss it several times while she muttered some mumbo-jumbo or other. The book turned out to the Koran – or so she said, though it appeared to be about as thick as a pocket diary, making me wonder why those chaps in the madrasahs in Pakistan take years to learn it by heart. My mother-in-law also made us both wonder about the usefulness of the exercise when she admitted, unprompted, that “When I pray to Jesus, I usually find that I get the answer quicker.” 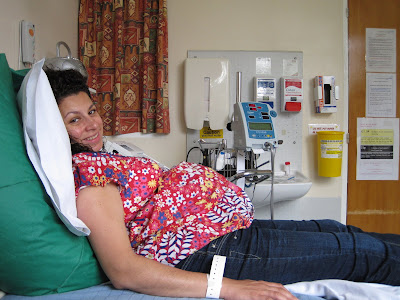 Mrs H being a Brave Little Soldier before it All Kicked Off
The process of attempting to induce the birth of our son began at around 9.30 and then not a lot happened for a couple of hours, so I excused myself to go home and take the dog for a walk. I was conscious as I was walking by the river of a sense of deep calm and the feeling, as Churchill put it in 1940, that “all my life had been a preparation for this hour and this trial”. Quite poetic, that, by my standards.

After I had grabbed some lunch, I returned to the Assessment Room to find that there had been a surprising change of pitch while I was away; Mrs H was experiencing what seemed to the untutored observer to be painful contractions every 20 minutes or so, and was in so much pain that she could no longer lie down. She turned to her mother after the first one I observed, and informed her that she must be sure to bond with this grandson, as she most certainly wasn’t going to be having any more of them.

The contractions almost immediately increased in frequency to about one every 10 minutes, so I thought it prudent to have a word with the hatchet-faced old boot presiding at the front desk, who had clearly missed her vocation when the NHS abolished old-fashioned battleaxe matrons in the mould of the late, lamented Hattie Jacques. After an authority-asserting delay she came into the room and said, in response to a complaint about the pain and an enquiry from Mrs H as to whether it was too late to opt for a Caesarean, “I hate to tell you this, love, but you’re not even in labour yet”, adding that someone would be along to give her a scheduled assessment quite soon anyway, and in the meantime she might as well just grimace and bear it.

Fortunately the original midwife, who had completed the “niceness” module of the patient care course, returned shortly afterwards and within seconds pronounced “Ooh, you’re nine centimetres dilated … you’re going to have a baby!” and promptly wheeled Mrs H through into a Delivery Room. Although it came equipped with doors, they were never closed and I imagine that Mrs H’s screams could be heard at the other end of the hospital. Having taken on board the warnings that induced labour is rarely quick, I envisaged that we were going to be in for several hours of this, so I foolishly accompanied Mrs H into the room to offer a few words of initial encouragement before staging my planned tactical withdrawal to a suitable boozer. Instead I found my hand seized in a vice-like grip from which there was no practical possibility of extricating myself. At one point she squeezed so hard that I thought my fingers were going to break, and wondered whether I would ever be able to type again. The potential loss to the world of blogging and regional journalism scarcely bears thinking about. Later she dug in her nails with such ferocity that I was amazed she did not draw blood. Though not as amazed as I was by the business-like way Mrs H responded so effectively to the midwife’s advice that screaming was a waste of energy which could be applied to pushing, to get the thing over with. She later attributed this to her training for the Great North Run.

Remarkably soon afterwards the midwife said. “He’s right there. I can see his head – he’s got lots of lovely black hair!” Mrs H asked if she couldn’t just pull him out and she said she would grab him by the ears if she could see them, but there was nothing to get hold of at present. After a few more pushes the head was out (I took the midwife’s word for that) and then, amazingly quickly, the whole thing was over and I could see a little baby lying between Mrs H’s legs. I cried, as all authorities on the subject had predicted I would, despite my staunch determination to prove them wrong. It was 15.53, precisely 50 minutes after I had rung Mrs H’s father with the news that we were moving to the Delivery Room. 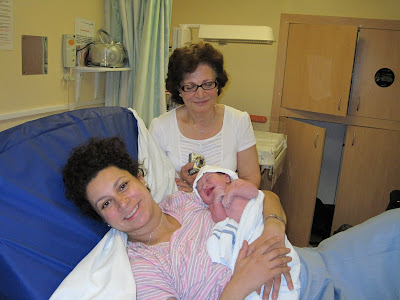 Mrs H and her real birthing partner, with Baby H 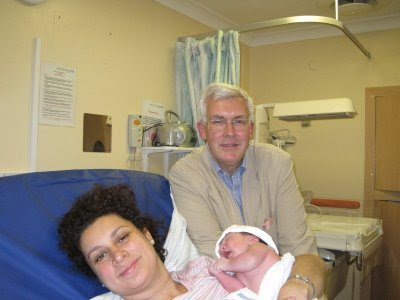 The proud mother and shell-shocked father, with offspring
The baby’s face was rather purple at first, allowing me to make an inappropriate joke about him being black and there being some questions to answer later, but we swiftly established that he was whole and in good nick. I was invited to cut the cord, but declined politely and allowed my mother-in-law to do it. Another midwife then gave the baby a quick rub-down and handed him to his mother, while her original attendant got on with delivering the placenta, beginning with its ugly, long, grey cord and carrying on with an object that looked like something out of a low-budget 1960s Hammer horror film. I did my best to avert my eyes, just as I used to do when they showed the films on late-night TV in the 1970s.

After this The Baby was weighed, initially at 6lbs 13¾oz, subsequently revised to a straight 7lb. I noticed that he was slim, with rather a long body, dark hair on his head and also on his surprisingly hairy back, and disproportionately large genitals. He only inherits one of these characteristics from me, and regrettably it isn’t the last one. I took a suitably embarrassing photograph of him while he was on the scales, but he was soon decently clad in a nappy and shortly afterwards in a blue and white-striped jump suit which made him look, to my mind, like a junior convict. He had coughed and then cried a little when he first emerged into the world, but after that he just lay on his back with his eyes shut, practising his sucking technique. I decided that he was, on the whole, rather lovely. 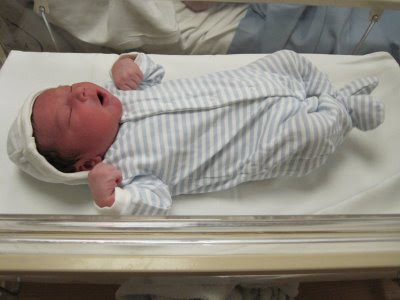 All he needs is a ball and chain to complete his fancy dress
After a while Mrs H was wheeled off for a shower, rashly leaving me in sole charge of The Baby. Then we were kept waiting for considerably more than an hour for someone to come and wheel her up to the ward. Our rather graceless greeting when we finally arrived there was a warning that visiting hours were just ending and that Mrs H’s parents, who had been twiddling their thumbs in her room, would need to leave immediately. I hung on until the official chucking-out time for “partners” at 8 p.m., then went home and attempted to buy myself a bottle of chilled champagne from the local off-licence, forgetting that we lived in Scratterville and that this was a hopelessly unrealistic aspiration. However, they did have a bottle of chilled Australian sparkling rosé, which I think I might even have preferred. Perhaps I am becoming acclimatized to Scratterdom. Come to think of it, why on earth did we go out a few months ago and buy those new pillows, when we knew we had a date at the maternity hospital coming up?