Now there's NICE progress for you

14st 10lb (surprisingly), 2.0 units. I woke up at 5.45, but somehow misread it as 6.15 and decided that I might as well get up and write my weekly newspaper column. I had run through a couple of ideas in my head as I drifted off to sleep six hours earlier, one of which struck me as just about acceptable and the other as very funny. Naturally I could not remember the slightest thing about the very funny one. (Memo to self: place notebook and pen by bed. Memo to Mrs H: have wall demolished to make room for bedside table.) I hoped that sitting down with my computer would bring it all flooding back, but it didn’t. So I positioned myself on the sofa with a cup of tea and the laptop on my, well, lap, and wrote something vaguely about Iran, justifying it to myself if to no-one else on the grounds that I must be the only columnist on the paper who has the advantage of being married to an Iranian. (See http://www.keithhann-whyohwhy.com/2009/06/cometh-hour-cometh-woman.html).

I had bought all the national newspapers on Saturday and been frightfully pleased with the coverage of the release I had put out on Friday. In the absence of any more professional arrangement, I had even spent some time at my desk with a pair of scissors and a Pritt stick, making cuttings for the file. It reminded me that I quite actually enjoyed my former career in PR, on the comparatively rare occasions when things went according to plan. Sitting in my office this morning I heard the Chief Executive’s voice in the corridor and thought I would take the opportunity to bask in a bit of unaccustomed praise, so I stepped out and asked him what he thought of his press coverage. It was just like old times, “A bit disappointing, really. There was nothing in the Telegraph.” (To pick the one and only national paper that had chosen to ignore our release.) “There were no big pictures, no half pages like there were when we were quoted.” Ah well, that will teach me.

At noon I drove to the station through a surprisingly violent but very localized rain shower, and picked up the old school and university friend with whom we had arranged to have lunch. The poor sod had just escaped after a weekend in Wales, yet Mrs H chose to take him straight back there, to a pub selected on the grounds that it would be a nice place to sit outside. This seemed a bit optimistic in the circumstances, but it was temporarily warm and sunny, and there was masses of free space inside if we needed to make a dash for it, so we decided to give it a go. 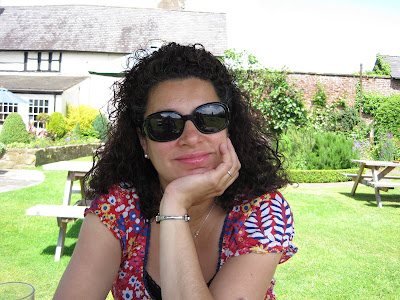 Mrs H in the sun at the pub: perhaps her last child-free outing

Our guest demonstrated the effects on the brain of having a weekend home in Wales by becoming highly excited about the strange, large birds on the other side of the lake which he swore were ostriches, but which looked to me remarkably like Canada geese. I began to understand how he had come to be a member of the British National Party. Who knows what an immigrant must look like in his eyes? He entertained us during the meal with the tale of how he had scoured his part of south London for an English-sounding doctor when he moved there, and ended up with someone who is as black as the ace of spades. Apparently he very nearly died when the man failed to treat him properly for a chest infection. I wonder why? 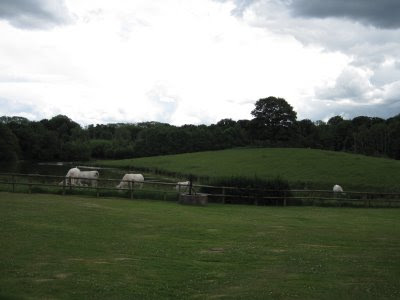 Dark Welsh clouds gather over what my friend identified as a flock of European mammoths
Having deposited our friend at the station, and sadly failed to persuade him to borrow a bed sheet and dress up in Ku Klux Klan gear for the return journey, we made our way to our weekly meeting with the consultants at the hospital maternity unit. We were seen promptly by the PLU (as in People Like Us) diabetic specialist, yet another pukka Englishman, this one with a reassuring Robert Winston style moustache. He finally explained to us that the reason for recommending an early induction in the case of diabetic mothers is that the placenta is more inclined to fail, which could jeopardize the baby, adding that it would be rather a shame to have a “tragedy” after coming all this way. It would indeed. At 38 weeks, he said, the baby was safer out than in. And we believed him.

We then moved across to see the altogether less impressive obstetrics team, represented on this occasion by a plump south Asian gentleman who seemed obsessively interested only in Mrs H’s iron levels, and had not even grasped that she was diabetic until Mrs H mentioned it when we were on the verge of being told to come back next week. She wondered why he had not made any mention of the early induction that his colleague had raised last week, and which the diabetic team favoured. He asked what day next week would suit and Mrs H said Thursday, so he went off to consult with the consultant, appropriately enough, by means of a whispered conversation in the corridor outside. We sat listening to this while contemplating our surroundings in a depressingly scruffy cubicle. It was hard to decide on its least appealing feature, but I finally concluded that the half-eaten sandwich biscuit lying on the floor probably clinched the title. I wondered how long it had been there. Our doctor finally returned with a NICE leaflet about induction on which he wrote “7.30 Thursday”, which turned out to mean not next week, as we had been discussing, but the day after the day after tomorrow. Mrs H began hyper-ventilating at this point, and I did not feel that I could altogether blame her.

When we got home we walked The Dog down to the river and attempted to get our minds round the concept of imminent parenthood. At one point Mrs H neatly summarized the situation as follows: “I knew you were in denial, but I only realized last Monday that I was in denial, too. Now I’m in denial about being in denial.” On the way back we called at the local greengrocer and bought ourselves a courgette plant, which is apparently the thing that every imminently expectant mother needs to take her mind off it. It was certainly more effective than the actually far from NICE leaflet about induction I read in bed this evening, and which constitutes pretty much the whole preparation that the NHS has provided to Mrs H. This helpfully advised that the procedure is likely to be more painful than a natural delivery. Thank you so much, Plain English Campaign. Without your kitemark seal of approval, it would no doubt have used some traditional medical euphemism for total agony like “mild discomfort”. But then that’s progress for you.