Moving in the right direction

14st 12lb, zero units. It was so chilly in the house when I got up at 6 o’clock this midsummer morning that I treated myself to a blast of the gas fire as I sat on the sofa, eager to write some e-mails but fearing that friends might try to have me sectioned if I started writing to them at that time on a Sunday.

I took The Dog for a walk around noon and found the streets still full of no-hopers limping to the end of the “Deva Triathlon”. An idiot who had clearly entered for the supplementary Slowest Driving event impeded our path across the street so I shouted some colourful abuse at him, attracting the attention of the finishers drifting back from the end of the race, pushing their bicycles and carrying square plastic boxes full of God knows what impedimenta. They looked at me as though they considered me a likely candidate for sectioning, too. After my improved mood yesterday, I was definitely Mr Tetchy once again.

The crowds eased by the time we reached our usual path to the river by the Scratters’ Academy, but its grounds were filled with marquees, music was playing over loudspeakers and a bloke was sitting in a little glass commentary box saying mendaciously kind things about the pathetic losers who were still trundling up the hill from the river to the finishing line. I was relieved when he did not feel the urge to comment on the large crap The Dog decided to take in full view of his vantage point.

We next found the path we had intended to take along the river blocked with tape and two people badged as “Marshal”, but who did not look like they would be much use in a shoot-out at the OK Corral. So we crept under various unmanned sections of tape to reach the park across the river. Here The Dog distinguished himself by having another crap right in the middle of the path next to an incredibly gruff-voiced (possibly transgender, now I come to think about it) mother and her three young children, who were cooing over and feeding a baby squirrel. Luckily he did not attempt to eat the squirrel for his next trick. In fact, he did not even chase it, just looking at it in a fascinated sort of way. Or maybe he was really staring at Sexchange Mum; he is remarkably good at pretending to do other things to disguise his fundamental nosiness.

One thing I had noticed shortly after entering the park was the absence of the usual dog waste bin. I noted the absence of another two as we made our usual circuit, reflecting that by this time next week I should be able to take my son for his first ride on the miniature train. Whoo-whoo! I finally found a bin that they had perhaps overlooked near the entrance by St John’s Church. If this is the new Conservative unitary council’s idea of enhancing public services then they have just lost my vote, or would have done if I had actually bothered to put myself on the electoral register.

At lunchtime I took some sandwiches into the hospital and shared them with Mrs H, who was weak with hunger after receiving probably the world’s worst plate of roast beef from the hospital kitchen (or, in reality, no doubt, the off-site, cut-price facility where food is now prepared). Mrs H has now become a sort of milch cow. She observed herself that she had woken at 6 to find that she had breasts like Pamela Anderson, and wondered where the hell they had come from. The afternoon passed much as yesterday: sitting in the soporifically overheated neo-natal unit, watching Mrs H feed The Baby and then express her remaining milk, and listening to the mother of the premature baby behind a screen chatting to her scratter relatives. We went back upstairs for a cup of tea and, to general delight, The Baby was brought back up to join us at the same time as his grandfather pitched up for an evening visit. Things are clearly moving in the right direction, which is always better than the alternative in my experience. 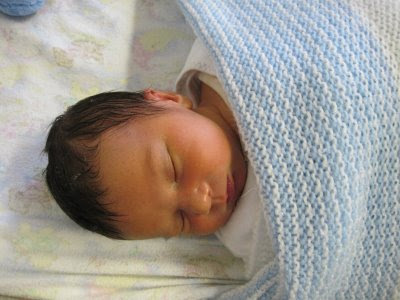 Baby H: back where he belongs