14st 10lb (they had curry on the menu for lunch in the staff restaurant yesterday, with naan bread and popadoms and everything), 1.5 units. I was on track for zero units until a mysterious knocking in the early hours woke us both up and made me reach for a soothing whisky nightcap; I concluded that either the dog was having a particularly loud and rhythmic scratching frenzy or we have rats (in which case both the dog and cat are clearly even more useless than I thought, which is saying something) or someone is trying to contact us from The Other Side. My money is on the last of these. It could well be one of my miserable ancestors trying to advise the baby not to come out.

Still, at least it has been a nice day today. It was also a pretty nice day yesterday. A shame, then, that it should have been such a spectacularly nasty evening on Wednesday, when I accompanied Mrs H to the grand party that followed her company’s head office conference. The grand garden party, that is. I knew it wasn’t looking good when it took half an hour longer than usual to crawl home from the office along a series of flooded roads. The delay was partly because no-one dared to overtake the bloke on a bicycle who was wobbling very slowly through the deluge, looking exactly like a very wet monkey dressed in a Guantanamo-style orange jump suit. It wasn’t that we could have made him any more drenched, but we were clearly nervous of actually drowning him in our wash. Then, one by one, we concluded that he was probably Welsh and went for it.

I was sitting on the sofa explaining to Mrs H that it would be mad to go to the party, and that she could not go without me because her advanced pregnancy was my alibi, when there was a terrific pounding on the front door. Mrs H, who was nearest, went to open it and a wild-eyed, elderly man in shorts burst into the room, shouting “There’s a collapsed manhole down the street and the sewers are backing up! It’s this torrential rain! There’ll be shit all over your back yard!”

Perhaps detecting the hint of a smile about my lips, brought on by the fond memories he had aroused in me of Private Frazer in Dad’s Army, he continued “This is no laughing matter – it’s serious! I’m telling you there’ll be sewage all over your back yard! It’ll be coming up through your manhole! You won’t be able to use your toilet! I’m an ex-builder! I know what I’m talking about! Mind if I take a look?”

I’ve always made a point of never arguing with anyone who has tattoos on their knuckles, even if they are old enough to be my father, so I meekly followed in his wake as he headed purposefully towards our back door, merely taking the opportunity to whisper to Mrs H “Who the hell is he?” and receiving the reply “Mr Jones from two doors up the street.” Which was, in the circumstances, rather more reassuring than the other obvious possibility, “I don’t know: I’ve never seen him before in my life.”

He explained the dynamics of the local sewerage system as I opened the door, with special emphasis on the bloke two doors down who had ignored his repeated warnings about the whole collapsed manhole scenario. His face fell like the proverbial stone as soon as he realized that there was not so much as the smallest turd floating around in our modest yard. In fact, there was not even an inspection cover from which it could have issued. “Where’s it gone?” he asked, looking about him frantically, “It should be there!” He pointed to a patch of unbroken concrete just outside the back door. “Unless when they built this extension they left it under the floor – they didn’t ought to have done that!” He went out and looked around the corner. “Or maybe they moved it round here and then covered it up with that decking! They shouldn’t have done that! The shit will have your decking up!”

He left shortly afterwards, clearly immensely disappointed and faintly apologetic, but also looking forward to an immense geyser-like torrent of ordure imminently bursting out of the ground under extreme pressure and taking at best our decking, and at worst our kitchen, skywards with it.

After that Mrs H and I had a brief, frank discussion about the party. This inevitably concluded that we were going to it, since that was what she wanted to do. When we got there it was all very British stiff-upper-lip-mustn’t-grumble-making-the-best-of-it as we wandered around the garden in the rain, moving from bar to bar like bees collecting pollen. Though we agreed that the jazz band were perhaps the most miserable group of men we had ever clapped eyes on, even by the high standards of brass instrument players, and they were at least protected by a canvas gazebo. 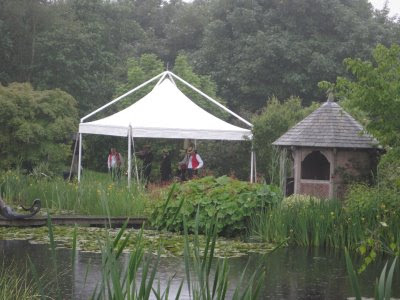 Mrs H can only wear flip-flops at present, the rest of her vast shoe collection being laid up as a result of the swelling of the feet which is apparently one of those side-effects of pregnancy that no-one bothers to warn you about. So her feet were soon absolutely soaking wet, and rising damp had progressed up her legs to leave a tide mark just below the knee of her jeans by the time we were scheduled to move indoors to a vast, heated marquee containing a splendid selection of delicious food, unlimited free drink and an Abba tribute band, all to be rounded off with a huge and spectacular fireworks display. Clearly this was the point at which the evening was set to take a dramatic turn for the better, but it WAS a huge party attended by upwards of 550 people, all intent on enjoying themselves, so naturally I had another whinge about wanting to go home. Remarkably, Mrs H concluded from my facial expression and body language that I was “so far outside my comfort zone” that she really ought to assent. 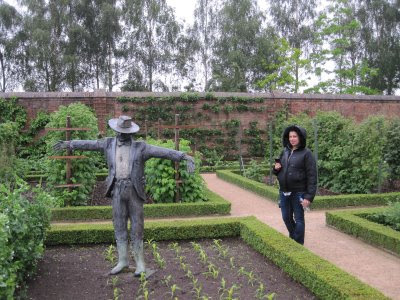 Mrs H and a high class scarecrow (scarecrow on left)

Funnily enough, one of the conference speeches that very afternoon had all been about the importance of teamwork and pulling together, which meant sometimes doing things we do not really want to do and stepping outside our comfort zone. By the time we got home I felt about an inch tall for failing to take that excellent advice, which I had even helped to script. My particular worry right now is that my own comfort zone is almost vanishingly small and, as well as excluding things like crowds and parties, it most definitely does not encompass babies. Even now, with perhaps only a week to go to C-Day, I am seizing every excuse, however feeble, not to hold any baby that may be proffered to me by its proud parents. Perhaps that knocking last night was one of my miserable ancestors from The Other Side, trying to tell me not to be such a c**t.

Alternatively, and even more worryingly, I suppose it could have been the final creaks of the back yard decking before the dam breaks and Mr Jones’s shit tsunami bears away all before it.