Since this came from someone completely unrelated to me by either blood or marriage – indeed, from a lady I have never even met – I thought it behoved me to sit up and take notice.

I must confess that it came as something of a shock to realize that I have not written a single word in this blog since December last year. In my defence, I have not been completely idle on the writing front.

For a start, there is my OTHER blog of columns from the excellent Newcastle Journal – www.keithhann-whyohwhy.com - which is faithfully updated nearly every week. I remain baffled as to why that blog has far fewer followers than this one which, as we have already noted, I rarely get around to writing at all.

Then there has been my output of assorted annual reports and press releases for clients, begging e-mails to my bank and so on. Plus I actually wrote a book last summer, which they told me would be out in time for Christmas, though I will admit that I made the schoolboy error of not asking them to specify WHICH Christmas. It will be published in August, if Amazon can be believed (and it’s not an issue of tax liabilities, so I suppose it might be trustworthy information).

So why the silence here?

As my correspondent notes, I do indeed have a wife and two children, though as a famously and shamefully neglectful husband and parent of the old school, whose attitudes were formed in Newcastle upon Tyne circa 1959, I cannot claim that they have deprived me of all that much potentially creative time. 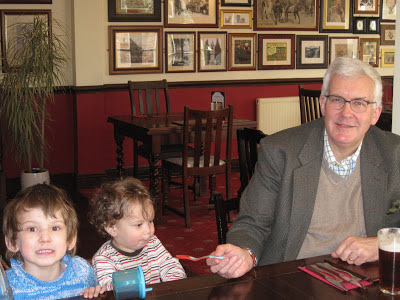 Two houses, yes. One owned and much loved in the far North, the other rented, on the grounds of proximity to my main source of income, in what I consider to be the North West (though the BBC, to my horror, insists that my “local” programmes are those of the Midlands).

I have spent a fair amount of time in the last few months tidying up the former with a view to putting it on the market and applying the proceeds to acquiring a family home in the part of the world where we actually spend the greater part of our time at present. Well, nearly all the time in the case of the rest of my family, since the vast majority of my sojourns in the North East are of a solitary nature.

Where that house ought to be became clearer last month when we learned that The Boy had secured a place in the Church of England primary school that had been his parents’ first choice when filling in the council’s application form (even though it came under the aegis of a different local authority), and had the added advantage of being the only school, of the four we dragged him around, that he said that he might be prepared to consider attending.

Needless to say it is located in one of the more expensive and attractive parts of rural Cheshire. Where I would estimate, on the evidence to date, that house values per square foot are approximately 100 per cent higher than in north Northumberland.

So we could either saddle ourselves with a large mortgage that I stand no chance of ever paying off (which, in the sad absence of the likes of Northern Rock, we might well struggle to find anyone willing to advance to us in the first place). Or massively downsize and chuck away most of the stuff that I have spent the last half century and more carefully accumulating.

There is, of course, no difficulty at all in identifying the Right Thing To Do under these circumstances. But, as so often in life, head and heart find themselves in conflict. Particularly when almost every thing I do to make my Northumberland home more appealing to potential purchasers also make it more attractive to me.

Top of the list here has been engaging a regular cleaning service, after 24 years of staunch resistance to the idea. Along with the now well established innovation of a gardener, this removes the prime disincentive to having two homes: that horrible sinking feeling on arrival when one grasps that the place is a total mess and that most of one’s stay is going to have to be devoted to sorting it out.

So it may yet be Bloke in the Proper North for a bit longer, then. Watch this space, as Pepys would never have said.