Teddy bears on the NHS

16st 8lb, 4.5 units. I owned a few toys when I was a boy, I will admit. To be honest, I have still got most of them. But I never had so many that I lost count of precisely how many Dinky cars, Matchbox toys and Britain’s soldiers I possessed, and I always knew exactly where all of them were.

Nevertheless, the fact that I was immensely lucky and privileged was constantly drummed into me by my elder brother, who grew up in the lean years of the Second World War, and many of whose toys I inherited. One I particularly recall was a toy tank comprising a lump of wood painted green, with a nail sticking out of one end of it to represent a gun. He in turn had been told how fortunate he was by my father, who I seem to recall owned precisely one wooden toy – and that was it. Though of course he did not have room for much more than that, living as he did in a rolled-up newspaper and subsisting mainly on gravel. (A reference to the oft-cited Monty Python sketch that actually wasn’t on Monty Python at all, but At Last The 1948 Show.)

Now, unsurprisingly, my two small sons have so many toys that I half expect an avalanche of them to cascade out onto the drive every time I open the front door. The Boy takes a selection of them off to his nursery (or, as we must now call it, pre-school) quite frequently, and I always have my fingers crossed that some of them won’t come back. Sadly they always do. But then he is quite careful with them, as evidenced by the following conversation overheard earlier this week.

Charlie (setting out a selection of his toy cars on the floor): “You can’t touch that one, Bobby. It’s very expensive.”

Carer (impressed by his vocabulary): “That’s a very big word, Charlie. Do you know what it means?”

Charlie: “Yes. It means you have to leave it in the shop.” He’s not wrong. 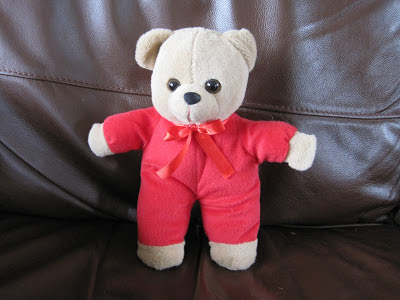 The other evening, I came across this teddy bear, which I had never seen before, and asked where it had sprung from.

Mrs H asked if I remembered the night when we had been due to spend an agreeable evening with friends at the Istanbul Grill in Chester, but Charlie had been mucking around on my swivel chair, fallen off and banged his head on a radiator. So she had cancelled the babysitter and spent the evening at A&E instead, while they tried to determine whether this had done him any lasting damage.

The teddy bear had apparently been presented to Charlie by the Countess of Chester Hospital as a token of their appreciation for his forbearance as they woke him up every hour to prod him and shine lights in his eyes to determine whether he was suffering from concussion. (He wasn’t.)

Charlie too had apparently forgotten about this windfall. But he stumbled upon it the other day and the following dialogue ensued.

Charlie: “Look, Mummy, here’s the red teddy I got from the hospital. Maybe next time I bang my head, I could get a blue one or a yellow one.”

Mrs H: “Yes, Charlie. Though maybe an even better idea would be not to bang your head again, so we don’t have to go back.”

Charlie: “Yes, Mummy. But I think I probably will.”

Sadly, I fear that he is most likely not wrong about that, either.