Balls to the trolleybus

16st 5lb, 7.0 units. Yesterday Mrs H made me take The Puppy to the vet’s to have his knackers lopped off. Naturally I was in no doubt who she really had in mind for this painful operation when she nominated The Puppy as my surrogate.

I hated the idea as much as I am sure The Puppy would have done if he had been consulted about it, and I spent the whole day at the office in a thoroughly bad mood - which is to say, an even worse mood than usual - with my legs crossed.

I will never forget the trusting, happy look on the little chap’s face as I left him in the hands of the vet after his pre-med injections.

Nor his dazed, puzzled and more than a touch resentful expression when I went to pick him up again in the evening.

I tried kidding him that it was all for his own long term good, like Angelina Jolie’s double mastectomy, but I could tell that he did not believe me.

The plain fact is that it is for our own convenience and protection, hoping to avoid a repetition of the horrific dog fights that broke out a decade ago when our current Dog was a puppy himself, and decided that the time had come to adjust the pecking order between himself and my senior Border terrier, now deceased.


Unfortunately for him age and guile always triumphed over youthful strength and vigour, and his unprovoked aggression invariably resulted in the young pretender limping around with a bandaged leg for a week or so. We finally had him neutered, on veterinary advice, in the hope that this might calm him down, but by then he was two years’ old and the die was well and truly cast.

My recollection is that he only finally gave up attacking the senior dog when the latter was struck down by dementia, and so was plainly not worth bothering with.

Still, while yesterday was undoubtedly a bad one for The Puppy, it was in other respects a good one for me, as I took delivery of my birthday present to myself: a prime piece of nostalgia, spotted on ebay and acquired in the face of stiff competition from absolutely no one at all, which was a surprise to me though I dare say it will not be to anyone else. 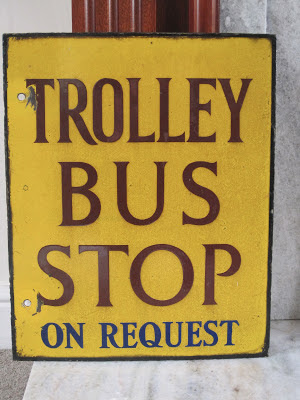 I used to stand under one of these every evening after my day’s indoctrination into the glories of the British Empire, and the might of the Royal Navy, at Akhurst Boys’ Preparatory School in what was then the rather posh and peaceful inner suburb of Jesmond, in Newcastle upon Tyne. (You may think I exaggerate about Akhurst, but I distinctly remember the red-splodged map on the wall of the headmaster’s classroom, and the fact that he gave us a morning off lessons so that we might join him in watching the televised launch of Britain’s first nuclear submarine, HMS Dreadnought, in 1960.)

It cost 2d on one of the numerous 33, 33a or 43 trolleybuses from the stop opposite Acorn Road to another at the bottom of Osborne Road. Here I got off and walked around the corner to spend another 3d catching a 38 or 39 to Swarland Avenue in Longbenton, where my mother would meet me. (In those days, before the invention of paedophilia, the only obstacle to even a five-year-old covering the whole three miles between school and his front door all on his own was considered to be the danger of crossing Benton Road without someone to hold his hand.)

If I walked through the quiet streets of Jesmond to Churchill Gardens, I could pick up the 38 or 39 there and the journey only cost a total of 2d, leaving me a shiny, octagonal, brass threepence to spend on sweets. When the weather was good I almost invariably did so, setting me on the slippery slope to obesity which has been my natural habitat ever since.

Most of my contemporaries tell me that they are completely baffled by my love of trolleybuses, but I liked everything about them. The hum of the motor, the boom of the trolleys as they passed over frogs and crossings, the ritual of the conductor hopping off to set the frog for the correct destination (“Pull lever for Benton” it said on the traction pole shortly before the Heaton Road junction; I shall now look out for that sign on ebay to extend my collection) or wrestling with a long bamboo pole to restore power when the trolleys came off the wires.

I was gutted when they turned the Benton routes over to motorbuses in 1964, and on Saturday, 1 October 1966 I sat behind a phalanx of swaying nerds in raincoats as a number 35c made its way from Shields Road to Delaval Road on the very last day of trolleybus operations.

We were going there anyway for tea at my Auntie Maisie’s on Benwell Lane, and I spent much time peering through her curtains at the small crowd taking photographs at the trolleybus terminus nearby, assuring four profoundly unimpressed adults that they were missing the chance to see history being made.

On mature reflection, their memories of the Second World War probably made the demise of the urban electric bus seem just a little bit of a sideshow.

Only one thing puzzles me slightly. In my elephantine memory, the wording at the bottom of the sign was either “Fare Stage” or “By Request”, not “On Request” as pictured. I wonder whether it was the subject of a fierce Big versus Little Endian debate on Newcastle City Council, and changed with political control of the authority?

Even so, I was very pleased with, and proud of, my sign. I was also proud of myself for not bidding for the obvious companion piece, a Newcastle Corporation Transport bus stop sign of similar vintage, which came up on ebay at the same time from another seller, with a considerably higher starting price, but attracted no bidders at all. (They used to put “Newcastle Corporation Transport” on the bus stops because there were many other bus operators plying the same streets – Gateshead & District Omnibus Company, United Automobile Services and the splendidly titled Tyneside Tramways & Tramroads Company, to name but a few. But they did not bother on the trolleybus stops, I assume because no one but the Corporation had access to the wires.)

I propped my smart yellow sign up on the fireplace and showed it to The Puppy, in an effort to cheer him up, but it did not work at all. His brown eyes flashed but one word back at me. And that word was “Bollocks”.