15st 11lb, zero units. I noticed that someone from the garage had rung while I was out on Friday morning, but hadn’t dared to leave me a message. There wasn’t much point ringing back, because I knew exactly what they were going to say – had known, indeed, from the moment I pointed out the damage to my car on Thursday afternoon – but I felt that it had to be done, and so I made the call. Guess what? My car had been filmed on CCTV from the moment it entered their premises until the moment it left, and at no point had anything made contact with the driver’s door that could possibly have damaged it.

Well, that’s very interesting, but it doesn’t change the fact that the door was in perfect condition when I brought it in, and now it is badly marked. Any theories?

‘The only thing we can think is that maybe it had been previously damaged by a stone or something like that. And then, when we pressure washed it after your service, that dislodged the paint.’

Hmmm. Only there was no sign of any damage before, and the mark looks very much as though it has been made with a sharp metal object rather than a stone. (It has not been made by an accidental collision with another car door, say, because there is no dent around it.)

‘Well, all we can say is that we have studied the CCTV footage and you’re very welcome to come in and look at it yourself …’

I suppose I should have called his bluff. If only I had the time. Instead I postulated the hypothetical scenario in which I brought their courtesy car back with an ugly chip out of its paintwork. Whose fault would that be, even if it had happened when I wasn’t in the car and knew nothing at all about it? And who would be paying to put it right?

Why me, of course.

Yet when the damage happens to my car in their hands, as luck would have it they can prove beyond a peradventure that it is my fault, too.

I told them that they could forget about my order for a new car, though no doubt whichever dealer I order it from will prove equally disobliging. I suppose it’s in their nature, as the scorpion said to the dying frog.

After this I drove for five and a quarter ghastly hours back to Cheshire, arriving a few minutes before I had to leave again in the taxi booked to take me to dinner. I dislike dinner at the best of times – lunch is my meal of choice – and this one proved particularly difficult because (a) I was in the world’s worst mood, (b) I knew hardly any of the other guests, and (c) no one wanted to speak to me, probably reasonably enough in the light of (a) and (b) above. The hotel where the dinner was being held was stuffed with overdressed scratters who had somehow made it back from Ladies’ Day at Aintree, where the word ‘lady’ is clearly interpreted with considerable liberalism. I left by taxi, rather earlier than Mrs H would have liked, and might even have lit the special ‘row candle’ that the vicar gave us at our wedding, with instructions to light it at moments of domestic discord, but for the fact that someone proved to have moved it onto a window sill just in time for this week’s unseasonal heatwave, with rather deleterious results.


After a day of solitary recuperation yesterday, while Mrs H disported herself at a 'hen weekend' in Herefordshire, I was looking forward to enjoying the sunshine with my little family today.  However,   a lorry crash in Nepal affecting one of my clients put the kibosh on that and I ended up spending most of the day at my computer or on the telephone. Though I did manage to get out in the garden for long enough to watch The Boy playing with The Dog, a duty which he takes very seriously indeed … 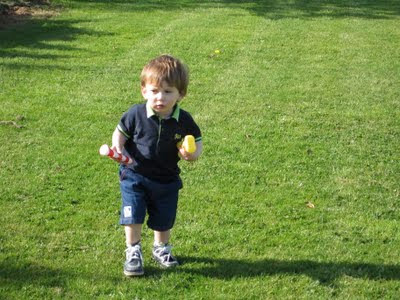 So glad you posted the new photo of your
darling Charlie.
Helped mitigate the effect of the some what disturbing "row candle". ;~)