The pharmacist who wants to be a doctor

15st 11lb, 5.0 units. A busy few days in Northumberland, having the house cleaned, getting my hair cut, buying some shoes, putting my car through one of its remarkably frequent services and lunching with an old friend. I was going to see my doctor, too, until he e-mailed a reply to the letter I wrote him last week about my stiff one from my cardiologist. He said that the cardiologist was right and I should re-start taking the pills originally prescribed in January and find out whether I could tolerate them. (He added that I should have that ‘gold standard’ angiogram, too, if only I wasn’t such a bloody coward, without actually using the words ‘bloody’ or ‘coward’).

So I cancelled my appointment to see him.

I then remembered that I only had a small handful of the aforementioned pills left, prescribed by a private GP in Chester, so I had to e-mail him back to ask for a prescription. There ensued a surreal e-mail correspondence with the surgery, who pointed out that I wasn’t allowed to pester the doctors with personal e-mails requesting prescriptions, but could register to order them through the NHS patient website. Yes, but only repeat prescriptions, I pointed out, and this was a completely new one. Well, it was showing up as a repeat prescription now. Yes, and I would order it that way in the future, but on this occasion …

Even so, it appeared, I was in breach of ‘protocol’ and should have kept my appointment and wasted ten minutes of my doctor’s valuable time asking him in person to write out the prescription for the drugs he had already e-mailed me with instructions to take.

Bureaucracy. Don’t you love it?

And there was more of it to come, when I wandered into the branch of Boots to which all the prescriptions from my doctor’s surgery are automatically despatched (does the Competition Commission know about this?) 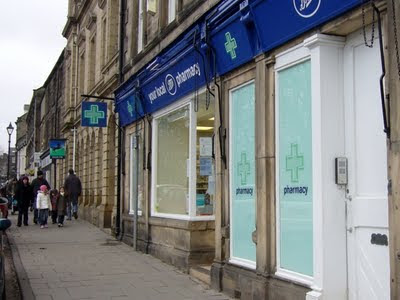 The woman behind the counter handed them over with the usual look of amazement that assistants in chemist’s shops adopt when anyone says that, yes, they do pay for their prescriptions, but asked whether I had time for a word with the pharmacist before I left.

I didn’t, really, but I said ‘yes’ out of politeness (not what you’d expect, I know), anticipating that someone would come across to the counter, lower their voice and ask whether I was aware that taking these particular pills would increase my sexual appetite ten-fold (which would still be nothing worth blogging about, to be honest).

Instead, to my amazement, I was ushered into a newly created ‘consulting room’ at the back of the shop and asked to take a seat opposite a man with dark hair and reassuring glasses. (Reassuring because, so far as I can see, the only important qualification for being a pharmacist is the ability to read.) I really did not have time for this, being due to meet a friend for lunch in Newcastle, so I asked what this new-fangled nonsense was all about.

He explained that he wanted to have a word with me about my medication.

I pointed out that my doctor had just prescribed said medication (and could have added, if I had time, that he had done so on the advice of an Honorary Professor in Cardiovascular, Sports and Exercise Medicine, no less). Did he think that my doctor did not know what he was doing? (A question to which an affirmative response would not have been particularly surprising, I must admit.)

“No, no, nothing like that,” he explained “But rather than simply handing the drugs over, we now like to make sure that our customers know why they have been prescribed them and how to take them.”

How to take a pill. It’s an overused phrase, but my mind genuinely boggled as I attempted to get a grip on just how stupid this bloke evidently thought I was. “What’s it got to do with you, matey? You’re just a glorified shelf-stacker” were the words forming in my brain, but what I actually said as I turned on my heel were “I have a first class degree from Cambridge – I can read!”

I wished, with the benefit of hindsight, that I could have come up with something quite a bit wittier and considerably less self-glorifying than that.

Then I drove to Newcastle, fuming, thinking how much easier life must have got for pharmacists since I was a child, when they had to decipher prescriptions scrawled in pen and ink and make up evil-tasting concoctions in glass bottles (returnable) with real corks. Now they just have to be able to read a computer print-out and count. [My further reflections on where it might all end can be found in my subsequent newspaper column].

After an excellent lunch in Newcastle I drove back up to Alnwick in my ‘courtesy car’ and hung around the garage for a good while so that I could talk to a salesman about the possibility of ordering a new car for Mrs H. Then I went outside and admired my nicely cleaned, not-so-old car, focusing particularly on the large chip in the paintwork of the driver’s door, which had definitely not been there when I brought it in this morning. So naturally I went back to remonstrate, and someone duly came out, sucked through his teeth, and promised to study their CCTV footage to work out how it happened.

I wonder how that will turn out …