The greatest show on Earth

15st 8lb, zero units. We celebrated April Fool’s Day at the Zoo. Chester Zoo, to be precise. We thought long and hard before selecting a nice, quiet day during the school term for our visit. Encouragingly, there seemed to be plenty of space in the car park when we pitched up, but there was still a queue at the gate. The sort of queue that is deliberately manufactured by saying to every would-be entrant, ‘Would you like to increase the value of your donation to us by gift aiding it, at no extra cost to yourself?’ so that everyone can hang around kicking their heels while the bloke in front gives his postcode, then explains that he hasn’t got a house number, because he lives in a pub. A pub that does not exist on the Zoo’s database, probably because the brewery renamed it last month after 300 years as the Rose and Crown and it is now called The Oscillating Parrot and Scrotum or something of the sort. On and on it goes. It makes me see red every time, because it is such a blatant scam (I am not making a donation, I am paying for entry to an attraction), it wastes so much of everyone’s time, the sums involved are trivial – oh, and purely by coincidence, the attraction ends up with your name and address on list so that they can pester you until the crack of doom, and quite possibly for years thereafter.

Mrs H now anticipates my answer to the polite query about Gift Aid (‘No, I f***ing wouldn’t!’) and interposes herself to hand over the money. But she still feels obliged to say ‘no’, with me breathing threateningly down her neck. The girl in the ticket booth pulled as sour a face as I would expect her colleague on the switchboard to be wearing on April Fools’ Day, after half a morning wearily explaining to people responding to post-it note messages to ring Mr C. Lyon as a matter of urgency that they have been had.

Through a triumph of planning, we also discovered that 1 April is designated as the start of high season, when the Zoo jacks all its entry prices up.

Once inside, we are immediately overawed by the sheer scale of the place, and how much there is to see. Namely Scallies. Thousands of them. Chavs, scratters, call them what you will. Many displaying their traditional plumage of a grey tracksuit, and attempting to express themselves in that strange foreign language known as Scouse. Some had babies and very young children with them, but there were many young couples simply wandering around hand in hand. Perhaps a visit to Chester Zoo is part of some mysterious Scally mating ritual. At any rate, we quickly realized that this was one zoo where the fences around the enclosures were intended to protect the animals from the visitors, and not the other way around.

We started with the elephants. Well, what is so wrong with the obvious? The elephants shared their house with a depressed-looking bird and a plant that looked like a huge cock.


Clearly God had been reading Viz on the day he dreamed it up. Apparently it doesn’t flower very often, but when it does it smells of rotten meat. You’ve got to admit He has a sense of humour, hasn’t He?

The elephants weren’t actually in their house, but a man with a mechanical digger was there, scooping up pachyderm poo. The Boy can’t say ‘elephant’, but he does a cracking imitation of one by raising his arm above his head in imitation of a trunk and trumpeting. One of the three highlights of his day was ‘man digger [arm raised, trumpet] poo’.

The elephants weren’t in their house because they were outside in the sunshine playing with a stick. It was immediately obvious that someone had sawn all their tusks off, though whether this has been done by Scallies, or as a preventative measure in anticipation of their interest, remains a mystery.


We moved on to the rhinoceros enclosure, where someone had sawn off the rhino’s horn. I sensed a pattern.


Then we walked over a bridge by the cheetah enclosure, where three cheetahs were sitting in a row wondering how the hell they could get over or through the fence, and how fast the Scallies would run if they did. And no doubt whether the poo would show through their grey tracksuits right away when they shat themselves.


The Boy, careering wildly over the bridge ahead of us, fell flat on his face and bit his tongue. There was quite a lot of blood. The cheetahs sniffed the breeze with interest.

Luckily he brightened up very quickly when the lion clambered down from his platform and did a spot of roaring. We decided, with the benefit of hindsight, that the lion and his mate were the only big cats in the place that seemed reasonably contented with their lot. All the others were clearly either sitting looking for a way out, or pacing endlessly around their enclosures in search of an escape route they had somehow overlooked. But lying around, having a wee and roaring from time to time, in return for all meals found, seemed to suit the lion down to the ground. I reckon The Dog would adjust to zoo life pretty well, too. ‘Lion come down’ was the second highlight of The Boy’s day.


After this it was time for lunch, which smelt and looked like something one of the animals might have done. El Bulli for Scallies, obviously.

Then there was a tiger, pacing; spoonbills, looking a bit ridiculous; a big green lizardy thing lying around under a sun lamp; a juvenile Komodo dragon, playing silly buggers; lots of flamingos; and a pair of Asian short-clawed otters, being seriously cute. 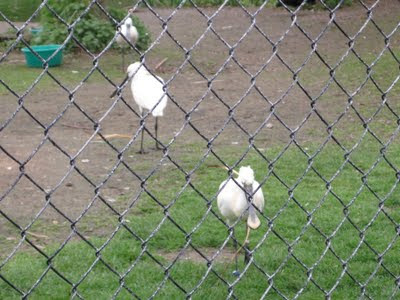 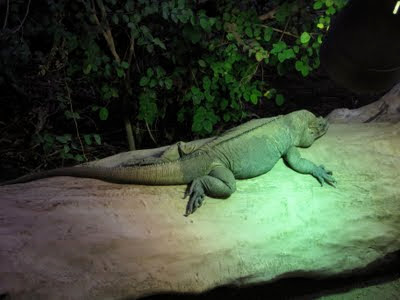 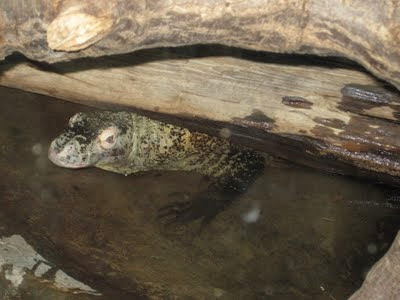 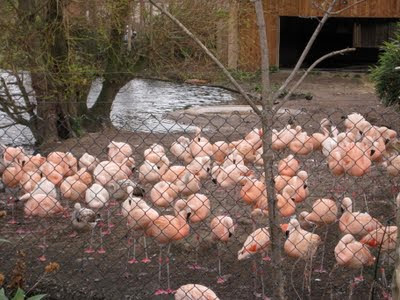 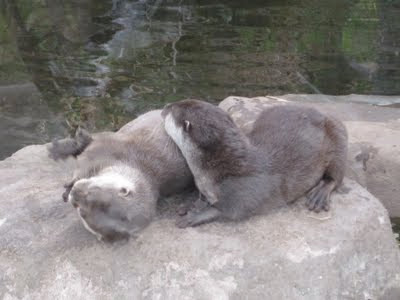 Next we saw some penguins, which The Boy decided were rubbish because they did not sing ‘Dum, dum, dum de dum’ to the tune of ‘Row, row, row your boat, gently down the stream’ like the battery-powered one he plays with in his bath.

I was naturally very much looking forward to the monkeys. Sadly I realized that they were no longer allowed to indulge in tea parties with their keepers, but at least I felt sure that they could be relied upon to stage an entertaining frenzy of masturbation, or to hurl their own excrement at passers-by, a sport at which the only orang utan I have knowingly seen before, at Phoenix Park zoo in Dublin, was a world champion. It was most important to move on before he got his eye in. I shall never forget the obvious pleasure with which he weighed a turd in his hand, surveying his audience, assessing the right trajectory and listening to them scream.

Sadly at Chester the chimps are on an island and the orang utans behind glass, so that avenue of pleasure was firmly closed to me.

We were wearying by now, but felt that we had to see the jaguars (pacing) and the giraffes (beautifully camouflaged against the Cheshire stone house where they live). 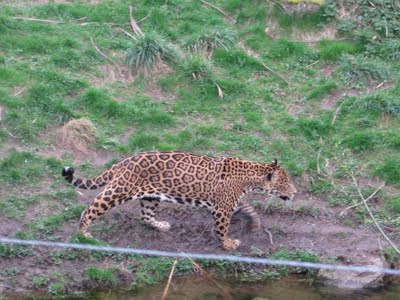 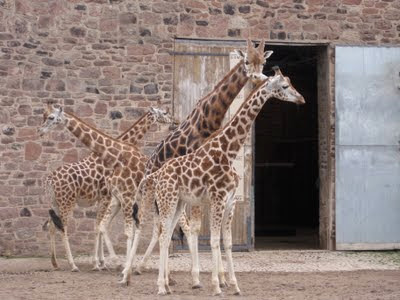 Then The Boy finally got up close and personal with the animals that constituted his third and greatest highlight of the day: the sodding ducks.  The very tame wild ones that have chosen to make their home in the Zoo, and presumably get some sort of perverted pleasure out of taunting the other avians which are confined to cages. I know I would. The self-same mallards that frequent our garden pretty much every day, and which he could see out of the window without paying £14 per head to the North of England Zoological Society for the privilege.


Everything after that was an anticlimax, though it looked like we might be in for just the opposite of that when some things that looked a bit like donkeys (but weren’t) started shagging. Onagers, they were, apparently. That was what it said on the sign by their enclosure, at any rate. It’s lucky that they cannot read or no doubt they would become hugely self-conscious about the rest of the animal kingdom laughing up its collective metaphorical sleeve because they are an anagram of ‘oranges’.


Then it was a quick gawp at a couple of very scruffy Bactrian camels and a seemly progress towards the exit. 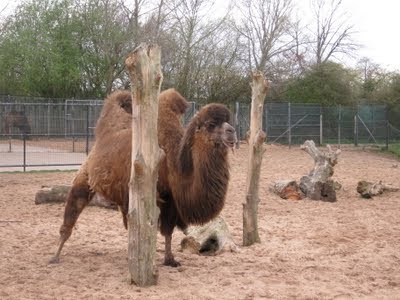 Mrs H wanted to see the spectacled bears en route, but the plan fell down because they weren’t en route. We made more of an effort to find the meerkats, in the hope that they would all be talking in Russian accents and trying to sell insurance, but our hearts were not really in it and we gave up.

‘Never mind,’ she said. ‘We can always come again.’

I'd love to know the assorted animals'
version of this day. :~)