15st 7lb, 2.0 units. After another cracking breakfast, we departed Unpronounceable Hall, wondering among other things:

(b) Why an outfit charging an eye-watering £445 per night for dinner, bed and breakfast felt the need to try and scam another fiver per night when submitting the final bill?

(c) Who thought it was a good idea to decorate our room with rather naff embossed wallpaper and then cover it in the sort of bright red paint that would have been dismissed by Royal Mail as too garish for their pillar boxes?

(d) Why anyone would consider that the three small plastic bottles of hand wash, body wash and shampoo in our bathroom constituted an adequate supply of toiletries for a supposed “luxury country house hotel”?

(e) Why, if the hotel grounds extended to 14 acres, as claimed on their website, it was possible to make a complete circuit of them in little more than five minutes, without breaking sweat?

(f) Why they did not make it slightly clearer on the aforementioned website that the “highly trained therapists” who were “on hand” for spa “treatments” (Blodywn from the village, no doubt) had to be booked 24 – 48 hours in advance?

(g) Why the claim on their website that Unpronounceable Hall was a favourite resort of Queen Victoria, her very own secret hideaway where she personally supervised the planting of the trees, appeared unsupported by … well, anyone else at all, so far as I can see.  Although I am ordinarily too modest to mention it, I do have a first class honours degree in history (awarded in the days when firsts were not ten a penny) and I did specialize in 19th and 20th century British history, while always maintaining a snobbish interest in the monarchy. And to the best of my recollection, Queen Victoria loved Balmoral, the Isle of Wight, the south of France and Saxe-Coburg in Germany. But Wales? Nope, never heard so much as a whisper of that. I shan’t believe a word of it unless and until they can persuade an unimpeachable authority of the calibre of Stephen Fry to lend his support.

(h) Why they displayed by their reception desk a collection of black and white photos of “celebrity” visitors which, in most cases, not only meant nothing to me and Mrs H but also to the hotel staff. My favourite was of a bloke who Mrs H thought looked vaguely familiar. Eventually the receptionist ventured that “he was in Porridge”. But he wasn’t Ronnie Barker, Richard Beckinsale, Fulton Mackay or Brian Wilde, and he certainly didn’t look like the shot-putting Jock off the front of the Scott’s porage oats packets, so I was none the wiser. When pressed on his qualification for entry to this hall of fame, she replied “He lives around here”.

Don’t get me wrong. We enjoyed our little break and the food was absolutely first class. We just left wondering about some of these little quirks, while I felt the pain of the bill almost physically.

I decided that we would drive north up the beautiful Welsh coast, mainly because I had failed to appreciate that almost every square inch of it is devoted to an extended caravan park. Still, at least this gave me a chance to revisit Barmouth and that long, rusty and remarkably rickety railway bridge, for which I have a very soft spot. 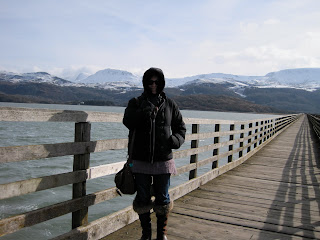 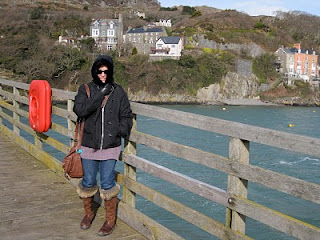 Mrs H without the Arctic wind in her face, looking marginally less menacing 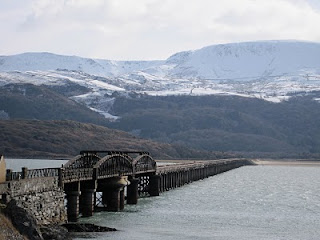 Love that bridge
We then drove for some time in search of a public lavatory. I came to the conclusion that they must camouflage them and take the signs away outside the tourist season, like the Home Guard burying signposts in an attempt to confuse invading Germans. Because of the difficulty in driving with one’s legs crossed, I was finally persuaded to stop near what appeared to be a reasonably promising pub. Crossing the Cambrian Coast railway line on foot, we tiptoed into what appeared to be an almost totally empty establishment, until we spotted a bloke energetically getting outside his lunch in a corner of the otherwise deserted bar. He was evidently as surprised to see us as we were to see him. Perhaps it was the fullness of his mouth that prevented him from saying “I wouldn’t do that if I were you, look you” as Mrs H opened the door marked “Toilets” and found herself being stared at by approximately 30 open-mouthed geriatrics, all neatly arranged in a circle as though they were in the day room of a maximum security twilight home. As no doubt they usually were, except on Mondays when the lunch-eating bloke took them out in his bus for a little trip to the pub, so that the management could make a no doubt doomed attempt to hose the day room down to do something about the smell of wee. We made an excuse and left, as they always used to say in the News of the World. But we did have a wee first. In the lavatories, too, which is probably more than most of their customers that day could hope to manage. I would gladly have bought a couple of unwanted drinks as a quid pro quo if there had been anyone behind the bar to serve them. Later we stopped to have lunch in Harlech, in the one establishment in the town where the staff did not look likely to drug us and place us in a wicker man as potential sacrifices. 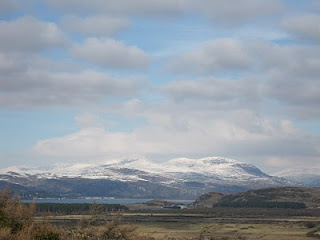 Pretty, them hills: a pity they're in Wales, obviously 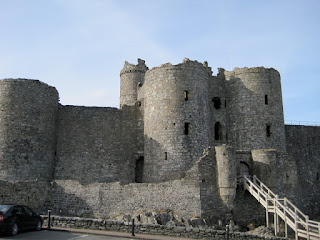 Harlech's defences: no match for braying English Ladies Who Lunch
It was full of PLU (People Like Us) Englishwoman braying at the tops of their voices. Actually, there were only four of them occupying a single table, but they were the only other customers and they did rather dominate the place. At least if the locals turned nasty, we reckoned that the Ladies Who Lunch deserved to be first in line. We drove back through Blaenau Ffestiniog. Very bleak, Blaenau Ffestiniog, as Noel Coward would surely have observed if he had ever ventured that way. But, who knows, perhaps he kept a secret love nest in the place. Just like Queen Victoria allegedly did by the Dovey estuary …

Travels with Charlie's Father.... a real trip!
Too funny.