No idea, 6.0 units. Unpronounceable Hall proved to be surrounded by the RSPB’s Unpron-Ounceable Bird Reserve, so it seemed churlish not to take a look at it. A woman in a wooden hut, made cosy by a wood-burning stove, asked us if we had ever considered joining the RSPB and I somehow managed to avoid getting into a row by simply saying “no”, rather than explaining that the only birds I actually gave a toss about were the songbirds in my garden, while the RSPB in my neck of the woods seemed to be obsessively interested only in the bloody great things that occasionally swooped down and ate them. Mrs H handed over £3 for each of us and we shuffled off around this bird-watcher’s paradise, in which we saw … a robin, a blackbird, a couple of distant swans, a small flock of Canada geese and something that was either a small gull or a big duck. I was glad I had not made a special trip. Every now and then we entered a wooden hide, in which families were sitting in quasi-religious silence staring intently at … well, probably nothing at all, to be honest. Very like church in every respect, then. 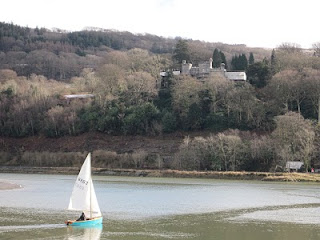 The view from a bird hide: note total absence of birds


After this we drove in search of a beach, and accidentally found ourselves driving through a shithole called Borth, which must be the shittiest seaside shithole I have ever come across in the United Kingdom, even including Filey and Newbiggin-by-the-Sea. And probably Sellafield, come to that. They should rename it Afterborth and give it a decent burial under the sand. Still, the beach further north was nice when we finally worked out how to get there, and the walk along it suitably bracing. It even gave us an appetite for dinner, though we were not so rash as to attempt the Tasting Menu two nights in a row. 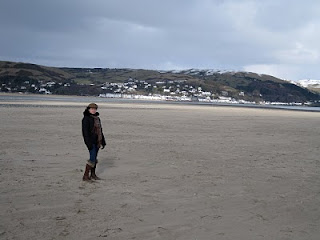