The work-shy confession of a true Brit

14st 10lb; 3.0 units. It was all going so well: 24 hours of high productivity on the blog writing front, and unaccustomed moderation in the consumption of food and alcohol. I even managed to make some slight inroads into the huge overhanging mountain of “thank you” cards and letters we owe for our wedding presents. (If you are still huffily waiting for one of those, rest assured that you are very much on our consciences, and that one will be along … er, shortly would probably be a bit of a politician’s promise, I fear.)

Then in the afternoon I went to see a client who has been paying me to do sod all for the last six months, whose opening remark was “You’ve put on weight!” (he’s from Yorkshire) and who then went on to outline some things he wanted me to do. I mean, actual WORK. I positively reeled from the shock, I can tell you. The problem wasn’t that he wanted me to write some stuff – I can do that easily enough, in fact I would positively enjoy it – but that he thought I should take a desk in his offices and “bring myself up to speed” by getting to know some people before I did it. Taking me right out of my comfort zone since I have (a) never liked the idea of getting to know people, though I am prepared to make the occasional exception for young, pretty women and members of genuine royal families, owing to my being a pervert and a crashing snob; (b) always had a strong aversion to corporate life; and (c) based my whole career on writing stuff based on the absolute minimum of research or prior knowledge. It takes massively longer to write a press release or newspaper column on a subject you actually know something about.

In fact I was so depressed by it all that I spent the evening lying on the sofa eating too much and drinking myself into a coma, while muttering about taking the easy way out. Mrs Hann would no doubt have looked up some flight times to Zurich for me if she had been present, but she was out for “a night with the girls”. So I moved on to brooding about why someone who generally seems to share my sense of humour should have sent me an e-mail this morning saying “Confess, not being a Viz fan, that I've never heard of "Up The Arse Corner". What a huge hole in his life. I sort of feel that I should rework the previous sentence to include the word “puckered”, but I can’t be, well, arsed. It was all in response to the following unofficial wedding photo, which struck me as a borderline candidate for that unpopular feature in the not-as-funny-as-it-used-to-be (if-it-ever-was) North Shields-based “adult” comic. 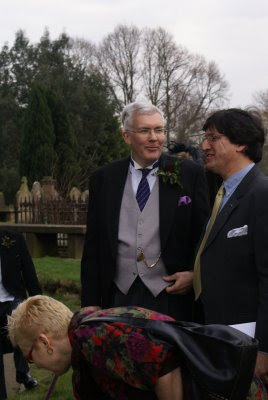 Not-as-funny-as-it-might-have-been
I then tried to brighten myself up by looking at something outrageously disgusting on the Interweb, but a Google search for “wrong un action” led me to spend half an hour reading a learned discourse about the United Nations’ misguided policies in Gaza instead. It was clearly destined to be that sort of day.