15st 1lb, 8.0 units (at least). Another setback. But only to be expected, given the amount of food and drink I put away at the point-to-point yesterday. To cheer myself up this morning, I put on my comedy green three-piece tweed suit (complete with watch and chain, naturally) for the first time since I became acquainted with the Less Tall Cheshire Brunette (as Mrs H was then known) who refused to be seen in the company of such an appalling old fogey. I had tentatively suggested that it might be the ideal thing to wear for the point-to-point, but had been assured that it would be completely over the top. Which might even have been true; the outfit of choice for Chaps seemed to be an old sports jacket paired with garishly coloured cord trousers, another category of garment ruled inadmissible by Mrs H as “bad and wrong”.

I got away with it this morning only because Mrs H reluctantly accepted that I did not have time to change when I sprang it on her immediately before we left for morning service in the church where we were married. Imagine my delight when we were greeted on arrival by the vicar, who said (clearly without irony) how much he envied my suit, and began feeling the lapel in an admiring sort of way. He even asked to look at the maker’s label, and cheered me by saying that a famous political diarist he had just been reading had his suits made in the same place. The pleasure was, admittedly, slightly diluted when he remembered the name of the diarist, and it turned out to be Chris Mullin rather than Alan Clark.

I think church-going is good for me. Even before I had had my slurp of the communion port, I had turned the other cheek when we arrived outside and another worshipper did a Lewis Hamilton in order to dive into the one remaining parking space towards which we had been heading. Not a complete Lewis Hamilton, obviously; they did not spray the rest of the congregation from a Methuselah of champagne when they got inside. But I just smiled benignly at their anti-social behaviour and drove onto the village green instead, whereas before I became a passing acquaintance of God I expect that I would have gesticulated wildly, sworn a lot, and considered the possibility of hauling them from their vehicles and giving them a good kicking.

Whether our attendance is good for the other members of the congregation is perhaps more debatable. This was one of the church’s more traditional services, graced mainly by old-fashioned hymns like “Praise to the holiest in the height” which I learned in my schooldays and can sing with great gusto – or could, if the organist did not have an annoying habit of playing a completely different tune from the one favoured 40 years ago by Jack Wolstenholme at the Royal Grammar School, Newcastle upon Tyne. Today there was also a more modern offering, composed in 1988, “Give me a heart that will love the unlovely.” I drew it to Mrs H’s attention as we were waiting for the service to start, and she immediately clasped my hand, looked into my eyes and said “You’re not unlovely, darling”. To which I naturally replied “I wasn’t actually thinking of ME.” As a result, we spent some time giggling helplessly like a pair of schoolchildren, thereby setting a thoroughly bad example to the impeccably behaved youngsters in the adjoining pews.

Returning from the service in a state of grace, and with my chronic indigestion finally abating after a morning of abstinence, we took a pleasant walk around Chester before lunch. It was a beautiful spring day; in fact, it would have been the perfect weather for a point-to-point. Strange noises issued from the direction of the Dee, where a small tent city had been erected on the Meadows and supersized canoes were taking to the water with blokes banging big drums positioned at the rear to set a rhythm for the rowers. Something which I thought only happened in unfunny cartoons about slave galleys. 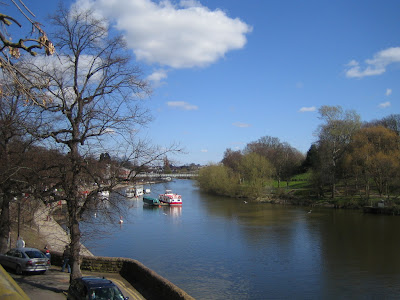 Spring, sunshine, the Dee and thee (Mrs H):
what could be more agreeable?
We returned home and set about writing “thank you” cards for our many wedding presents. We are writing these by hand, despite the fact that my own handwriting is universally acknowledged to be almost totally illegible, on the grounds that it least it shows we care. Shortly afterwards Mrs H announced that she had lost the will to live, though she showed equally little enthusiasm for my suggested alternative of packing the presents up and returning them to their senders.