14st 12lb, 8.0 units. Not the greatest start to the day from the point of view of my alleged diet. But I took the dog for an early walk so that I could wait in yet again for the delivery of Mrs H’s filing cabinet, and as I bent down with my poop scoop I saw something glinting in the grass. And, yes, it was a pound coin, which the dog had thoughtfully crapped next to rather than directly upon. I thought it betokened a lucky day, and so it proved for the nice men not only turned up with the filing cabinet but positively insisted on carting it upstairs, unpacking and assembling it (if screwing the handles onto the front of the drawers can be called “assembly”). It wasn’t a lucky day for them, though, as one of them nearly ruptured himself in the process, and the other left his electric screwdriver behind when he left.

As for the subject in my header: all right, I take it all back about the chicken strangler. The “official” photos were worth waiting for. Whether they were worth waiting almost a month for will doubtless provide fuel for vigorous debate for as long as my marriage lasts, and will continue to be picked (or should that be pecked?) over by future generations of Hanns until the crack of doom (which is not that far off, by all accounts). The only snag is that we now have 425 “official” images of the day to choose from (and about 500 in total) making it as difficult to select the best as it is for the admissions tutor of an Oxbridge college looking gloomily at a list of applicants with straight A grades in their A-levels. (It would never have happened in my day.)

Nevertheless, in response to popular demand – well, a couple of requests from friends who were probably just being polite – here are a few more pictures to supplement the “unofficial” snaps posted on St Patrick’s Day: 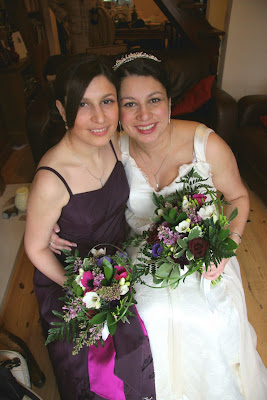 The sisters prepare to leave for church 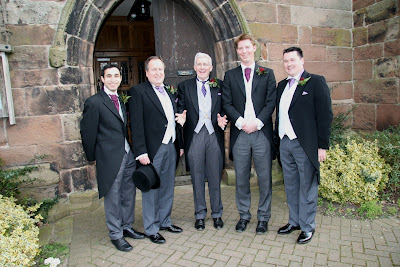 The two strapping lads to my left (or the right of the picture, depending on how you want to look at it) are my godsons; the one on the far left of the picture is the bride's younger brother. Clearly we were anticipating more trouble on my side of the church, given that we chose 100% more ushers for it, and ensured that they were constructed like the better class of nightclub bouncers. On a technical note, my height when I last checked was 6' 0", so the usher next to me can perhaps only be described as ****ing tall. 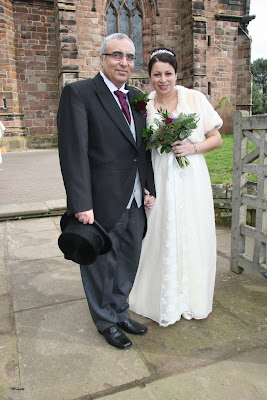 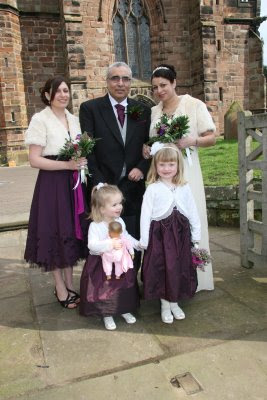 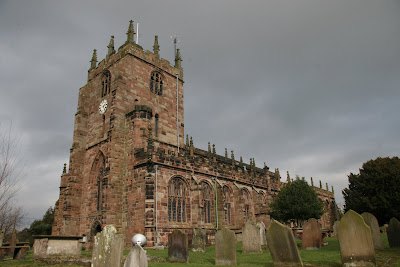 The church. Can you spot the bunny rabbit in this picture?

No, neither can I. 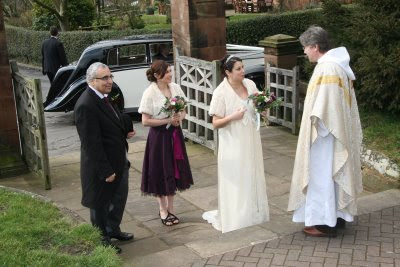 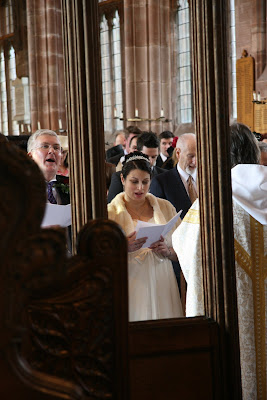 In fact, the high point of the day from a lust point of view. 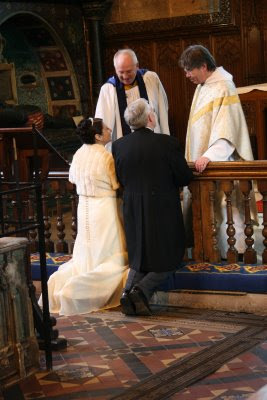 “It doesn't matter if you do go down on your knees and beg, there is no way her father is going to have her back now.” 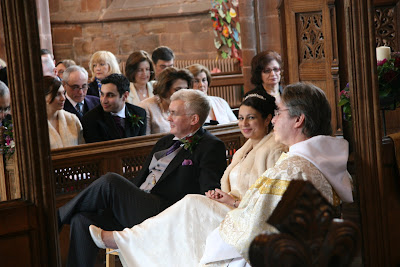 Not signing the register

We should have been, but Rick the Vic thought it would be more fun to listen to some Handel and Monteverdi - and who could disagree with him? 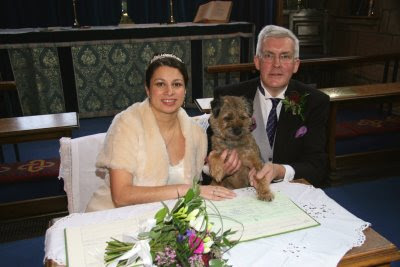 The only signature on the register that mattered 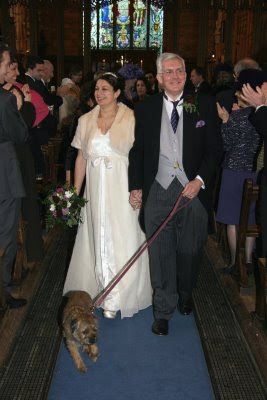 The congregation applauds wildly as the Page Dog lurches off

Their reaction presumably reflected their relief that it was finally over. Though there were mixed feelings on the groom’s side of the church, where many people could be seen glumly tearing up betting slips and looking for the John Lewis wedding list on their BlackBerrys so that they could finally buy a belated wedding present. 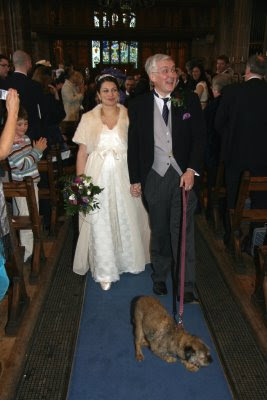 Are you sure there isn't a bunny rabbit under this pew? 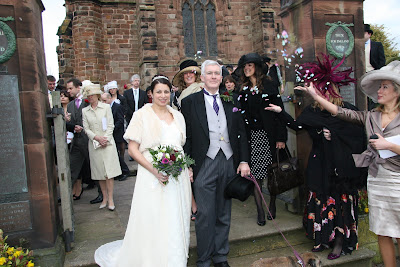 Hurrah! The confetti will distract attention from the mysterious bulge in the groom's trouser pocket

Does Rick the Vic need to count his candlesticks? 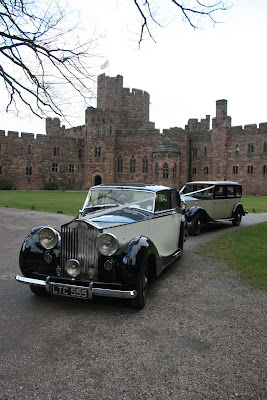 Some cars outside a castle

The photographer had clearly got bored with photographing the bride and groom by now. And who can blame him? 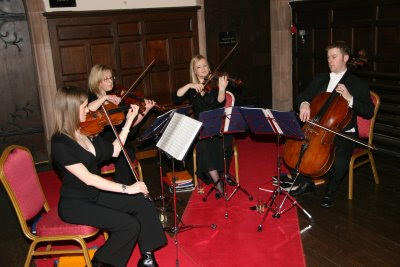 A string quartet in action

Though readers with the ability to count up to four will no doubt have been able to work that out for themselves. They were under strict instructions to launch into the theme tune from Fawlty Towers whenever a member of the hotel’s management team passed by. 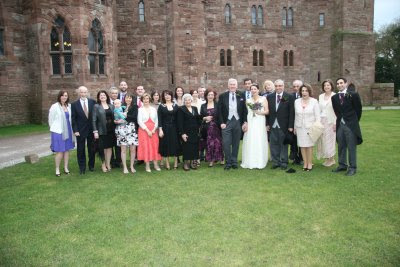 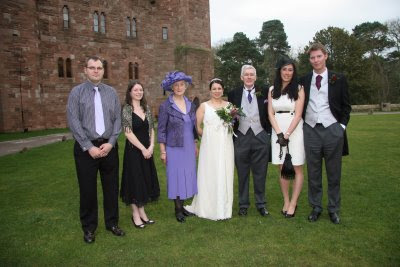 The groom's family: spot the difference

Though which side would you put your money on if it came to a fight, bearing in mind that wor's is Geordies, like? 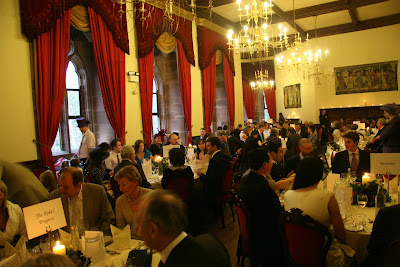 The wedding breakfast in full swing

Why there is a bloke standing in the window wearing a lady’s hat is one of life’s little mysteries. 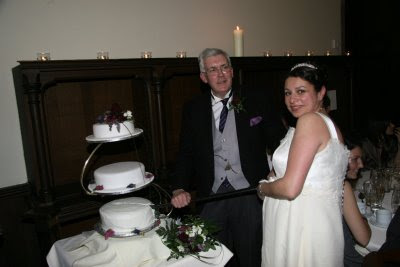 “Come on love, we can do it. Just pretend it’s a scratter’s neck!” 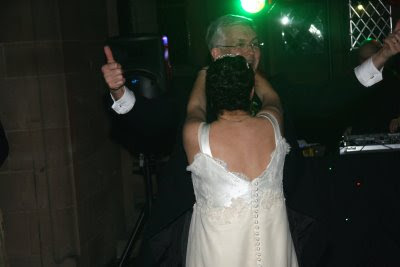 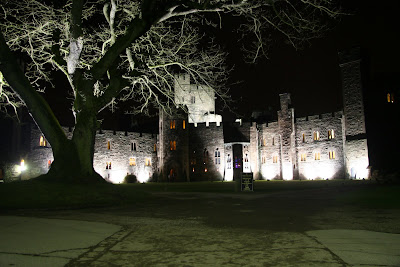 Ooh look, over there – a bunny rabbit! Or have I just been drinking?