If there is one thing I have learned from the white heat of the technological revolution, it is that it is always a seriously bad idea to consult an electronic device while in bed.

Even if one manages to avoid accidentally flicking the switch that will unleash a tsunami of top class pornography, the chances of getting to, or back, to sleep are as close to zero as makes no difference.

So very unlike my experience of the good old-fashioned book, magazine or newspaper, any of which are more or less guaranteed to bore me into the deepest of slumbers within minutes.

Nevertheless, when I woke in the early hours of this morning, I found that I could not resist sneaking a quick look at my iPad. Because I knew that, at 00.30 precisely, the Government was releasing the results of a lottery far more valuable and important than Camelot’s EuroMillions: the allocation of primary school places for September 2016.

I would have found out then if only my device had remembered the necessary password, as it is supposed to do but rarely does. So I put temptation aside, screwed my eyes shut with the determination of a Border terrier fixed on laying down some zzzs in the face of bright sunshine and some nearby pneumatic drill action, and checked again shortly after 6 when I was up and about in the normal course of events, and able to access the Top Secret Folder in which my passwords (all different, constantly changing and fiendishly hard to guess, obviously) are stored.

And there was great rejoicing in the House of Hann for the child previously described in these pages as The Baby, but now clearly overdue for promotion to The Boy Mk 2, had secured a place at our first choice school. 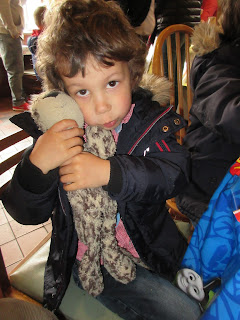 In reality this should have been no surprise given the operation of sibling preference and the fact that the school, though excellent in every respect, is not oversubscribed. A consequence, I imagine, not just of its being located in a fairly sparsely populated rural area but also almost on the boundary between two of the unitary local authorities into which our county was split by Labour in 2009. The fact that one of them came under Labour control last year suggests that there might have been some method in their apparent madness.

I pressed the “accept” button with alacrity and rushed to share the good news with the other members of the family, who all received it with total indifference. Because they had assumed (correctly as it turned out) that this was what was going to happen all along.

Personally, I feel that my pessimistic “what could possibly go wrong” mindset is of great benefit in allowing me to enjoy moments of elation when things do actually go right. On the downside, there was no one interested in sharing the bottle of Champagne I had reserved for this happy occasion.