A day out with Thomas

Me: “Would you like to go and see Thomas the Tank Engine, boys?”

Boys: “We’d rather stay at home and play on our iPads.”

(Technically Kindle Fires, but who am I to undermine their credibility in the playground?)

Boys: “Awwwwww.” So it was that we drove to Llangollen and shelled out £52 – that’s fifty-two English pounds, more than I earned in a week in my first job – to chug to Carrog and back in the sort of 1960s Diesel Multiple Unit which I always hated so much when it was the mainstay of British Rail in my younger days; plus shunting back and forth in Llangollen station yard in a brake van propelled by a very reasonable simulacrum of Thomas himself. 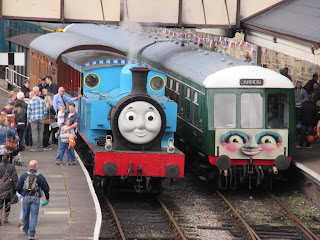 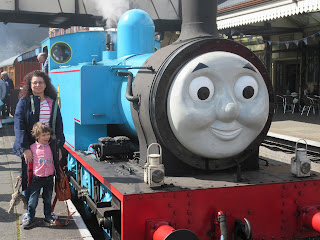 There was a puppet show and face-painting as well, but the boys quite reasonably consider all that sort of thing beneath their dignity. All they really want to do is go into shops and buy toys, with scant regard to price, quality or the fact that they already own most of the items on display.

I managed to persuade them that there was no point forking out hundreds of pounds we have not got to buy model locomotives that I already possess, gathering dust in my loft in Northumberland.

I assembled a large collection of them in the early 1990s, confident that I was making a brilliant investment for the future. And indeed auction results did seem to suggest that vintage Hornby trains were an appreciating asset, for a time.

Only those prices were driven up by sad old men, like me, satisfying a lifelong yen to own the coveted toys they could never afford when they were children.

A quarter of a century on, the same sad old men are dying or downsizing, and there is no one particularly interested in buying the collections they built up. Hence I am consistently advised that my models are worth less than I paid for them.

Might as well let the children wreck them, then. That is, after all, what they were designed for. And at least it will give them some fun away from their iPads for a while.