Writing from my sickbed

15st 12lb, 4.0 units. I have been in bed all day. I should be in London, having an agreeable supper with an old friend. But bed won the toss (no pun whatsoever intended). I have a bit of a cold, and a depressed sense of uselessness so complete that, when I made it into my office yesterday, I found myself staring at sheets of paper and the computer screen, completely unable to make sense of them or work out what, if anything, I wanted to say.

This morning I e-mailed the 100-odd people to whom I send a copy of my weekly newspaper column, informing them that I would no longer be doing so. Partly because I was depressed, but mainly because I am conscious that it must be an awful bore for the 80 or so recipients from whom I never, ever hear to have it pinging into their inboxes each Tuesday. Though probably not, on the whole, because they will presumably have set their spam filters to weed it out long ago. Which in turn means that I will never be able to catch their attention again, in the admittedly unlikely event that I have something interesting or important to say to them.

Life, as someone once observed, is a bitch.

Imagine my delight when, lying in my sickbed earlier this evening, I received an unexpected bill for £30 by e-mail from some photographic agency I had never heard of, for the unauthorised use of one of their images in my other blog. It was a nondescript and apparently amateur shot of a closed off licence, used to illustrate a point about the effects of supermarket competition, which I had thoughtlessly copied as the result of a Google search. Naturally I have now removed it. I have also wasted two hours of my life going through both my blogs and deleting any other images that look as though someone might claim them as their copyright. What a bore. Though what an even bigger bore to be the sad twat at the photographic agency whose job it presumably is to trawl through the ravings of all the sad obsessives on Blogger to see whether they have inadvertently copied an image they are not entitled to use.

I suppose I shall just have to use my own photographs in future. If I have to start paying £30 a go for illustrating them, the writing of newspaper columns, already hugely unprofitable, will quickly become a loss-maker. (I was going to put “loss-leader”, but after eight years of non-recognition by the wider world, where could it possibly lead?)

So here are a couple of photos I took on a walk with the family on Sunday afternoon, just to brighten things up. 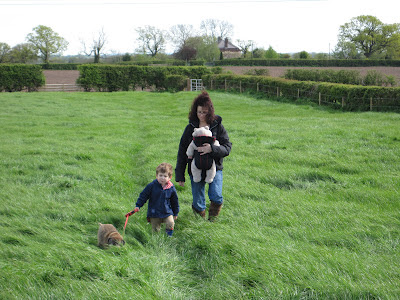 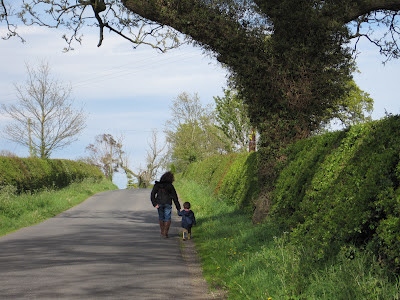 I was going to caption the first with “Swishy, swashy” as it reminded Mrs H and me of the long grass in the classic children’s story Bear Hunt, but I suppose that is copyright and frankly I can’t afford to take the risk.

One bit of cheering news for those who sympathized with my column this morning on the subject of Coronation Street of Dreams. According to tomorrow’s Newcastle Journal the producers have decided to postpone the rest of its planned tour, even though they claimed it received “standing ovations” during its two performances in Manchester. In fairness, I suppose it is all too easy to confuse a standing ovation with people walking out.

Love the pictures of Mrs. H, Charlie and Craster. Beautiful.

I hope you feel better. I enjoy reading your blog.
Please don't be too hard on the 'sad twat...who trolls through the ravings of sad obsessives on Blogger...' I expect his job is quite fulfilling in many ways. I expect a bill or two myself one of these days.

Anyone who survived the strange teachers (masters) at the RGS can survive the actions of these jobsworths.
I enjoy and also eagerly anticipate all your writings. I also get a feeling of worthlessness once in a while. Fortunately ten minutes with a young grandaughter usually changes that.
Keep the faith Keith.