The law of unintended consequences

I woke early this morning and raised the blind in the bedroom skylight to find myself looking straight at a Scottish saltire in the sky: quite enough to chill any Northumbrian’s blood.

Naturally the effect had faded a bit by the time that I had waddled to the other end of the house to find my camera, but you should still get the gist. 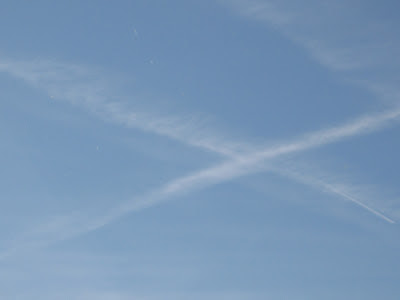 My fears of some supernatural portent were allayed when I spotted some twat in a fast jet happily at play creating similarly ephemeral artworks. No doubt some Jock in the RAF happily wasting my and other taxpayers’ money, but at least it made a decorative change from the usual waste of our money on Barnett Formula subsidies of Scottish roads, railways, welfare, education and health (both in the absence of prescription charges and paying for the consequences of a diet largely comprising deep-fried protein, potatoes and confectionery, washed down with Irn Bru). Not to mention building aircraft carriers that will almost certainly never carry a plane.

I must ask my friendly local MP whether this morning’s sort of thing is financed through the defence budget or the Arts Council.

Meanwhile, I am wondering whether the last two entries in this blog might have caused you a slight sense of déjà vu? If so, you are almost certainly one of my alleged “Friends” on Facebook. Or, rather, you WERE, as I have decided that Mr Zuckerberg can ram his new “Timeline” up his arse (that’s “ass” to you, Mr Zuckerberg) and have deactivated my account. It’s not what I signed up for, I don’t like it and I’m not having it.

What it is it with these geeks that they have to be endlessly “improving” things that their customers were perfectly happy with? Google has recently “improved” Blogger, with the result that posting blog entries is now around twice as hard as it used to be. But at least they haven’t yet arbitrarily changed the appearance and order of my blogs – though no doubt that will come. And, when it does, I fear that it will be “sayonara” from Bloke in the North, too.

Not that anyone is likely to notice, given the recent statistics on this blog’s reader numbers.

I had got into the habit of posting pictures on Facebook, partly because it is technically easier and quicker than posting them here, but mainly because I could control who looked at them, restricting the audience to my 70 or so alleged “Friends” rather than to the seven billion potential readers around the planet.

But I now realise that this is not really a risk at all, since no one reads my blogs anyway, so I have reposted my last couple of Facebook picture stories here, with some added verbiage.

I had been foolishly gratified by an apparent surge in readers of my other blog in recent months, until I drilled down the Sitemeter data to find how they had been referred to it. Around 80 per cent of them had come to it by searching Google Images for pictures, and around 90 per cent of those were looking for the picture of a lingerie model I used to make a point in one of my business columns.

So they are about as interested in my words as I pretended to be in the fascinating articles about cars in Men Only when I was a teenager.

It is a prime example of the law of unintended consequences in operation. Plus a colossal waste of time that makes drawing vapour trail saltires in the sky seem positively Stakhanovite.

Having said that, here she is again, boys. 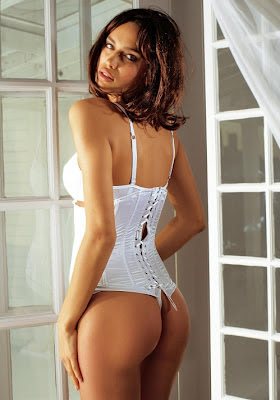 Because I may as well give a boost to Bloke in the North’s audience, too.

Well I, being one of your most loyal readers with absolutely no interest in lingerie models, particularly ones young enough to be my granddaughter, am greatly relieved to know what happened to you inre: to FaceBook. Couldn't agree with you more and the same for what google has done to blog keeping.
I intend to continue reading your postings, blog, column whatever as one of your great fans. So its not all for naught....quite... :~)

I had a similar experience here: