A Bank Holiday in England

As if it wasn’t bad enough being in England on a Bank Holiday, when the weather is inevitably crap, we made the critical mistake of asking The Boy how he would like to spend the afternoon.

“Go to the park and feed the ducks,” he said, regardless of the fact that we don’t live anywhere near a park full stop, never mind a park containing a duck pond.

The irony is that we did, once upon a time, live quite near a duck pond. And we haven’t moved, either. And yet our circumstances have changed completely.

When The Boy was a babe in arms a couple of years ago, one of the incidental pleasures of life was putting him in his buggy and pushing him along the serviceable concrete track to the local gamekeeper’s centre of operations, which comprised some pheasant breeding pens and a fenced pond positively teeming with mallards. The purpose of which became all too clear when we wandered along one day to find the numbers of birds quacking in the water substantially diminished, and pairs of shot corpses hung along the fence.

But at least they had a life of sorts before they were blasted from the sky, rather than being raised in some hideous indoor intensive duck rearing operation. For years I customarily ordered duck in restaurants, under the delusion that they enjoyed a year or two on a nice pond being fattened up with stale bread by caring handlers before they met their fate. They went off my personal menu when someone put me right about that.

Other attractions at the terminus of our walk often included a Larsen trap with a crow bait that we always had to pass off to The Boy as the gamekeeper’s pet. Plus an implausibly large cockerel that was housed, for no obvious reason, in one of the pheasant pens, allowing me to crack ancient jokes about “Lord D********’s huge cock” that mercifully went straight over The Boy’s head.


Then Lord D******** moved in next door to us and the gates to the track leading to the duck pond were chained shut. Which was fair enough, I suppose, given that it was never a public right of way in the first place. Though the other evening I did find them standing ajar and took The Dog for a nostalgic stroll. The huge cock was long gone – it succumbed, I think, to the exceptionally harsh winter of 2010/11. What was more surprising was to find not a single duck. I could not work out whether this was because Lord D******** does not like duck shooting very much, or is inordinately fond of it. But at least it ruled out trying to palm The Boy off with a bit of local trespassing in response to his Bank Holiday request.

So we drove getting on for 15 miles to a village duck pond containing really remarkably few ducks (perhaps Lord D******** had recently paid it a visit?), and those few clearly so stuffed with bread that they could scarcely be bothered to paddle their engorged bodies in our direction. In fact, only one bird really showed any interest in us, and that sadly failed to meet The Boy’s feeding criteria. 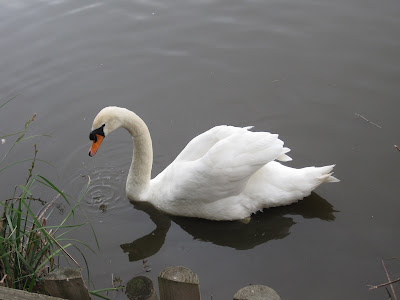 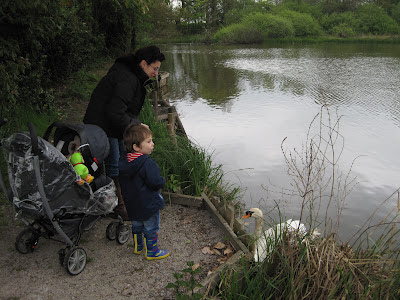 “Don’t give any more bread to that duck, Mummy. It’s too TOO BIG,” he kept saying, despite my best efforts to teach him the essential facts that (a) it was a swan, and (b) it was therefore likely to break his arm as soon as look at him.

We finally managed to dump our bread on a little clutch of ungrateful ducks, which looked at it with a singular lack of interest until it sank. 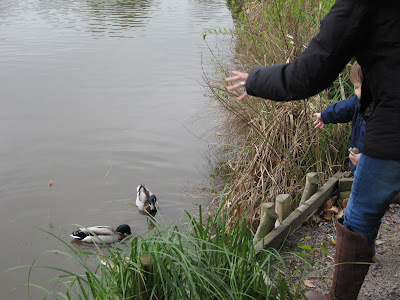 Then The Boy and Mrs H had a little go on the adjoining playground while I stood outside with The Dog in case he disgraced himself by crapping on the play equipment. 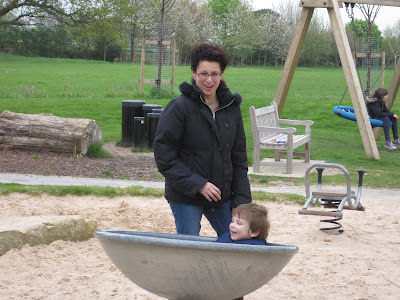 All in all, a pretty typical English Bank Holiday, then. Thank the Lord we don’t have more of them.

But the pictures are cute.