15st 8lb, 3.0 units. I was supposed to be hillwalking in Northumberland this weekend, while Mrs H helped a friend to celebrate her 40th birthday in London. But then she decided not to go.

Finding ourselves in Cheshire, this morning we went to morning service at the church where we were married, then on to Kelsall steam fair – which was, it has to be said, a bit pants. At any rate compared with the steam fairs I have previously visited in Dorset and Northumberland, where the fine old engines actually did something - like powering farm machinery or fairground attractions - rather than just sitting there gleaming and providing a place for the proud owners to sit and smoke a reflective fag. 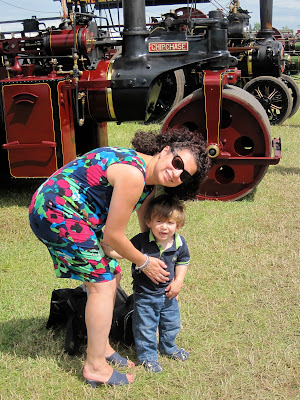 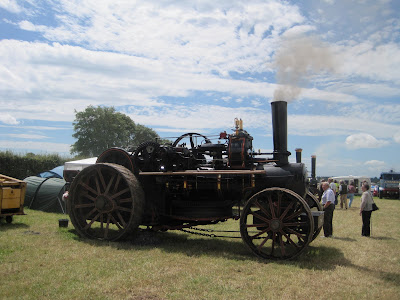 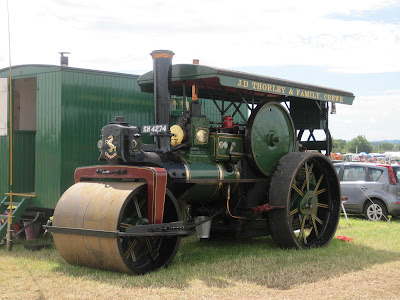 The outdoor catering was not of the hoped-for quality, either, drawing us back home for a spot of lunch.

After which Mrs H and The Boy went off to celebrate yet another second birthday, while I lay around attempting to distract myself from the symptoms of heart failure with a copy of the Sunday Times.

An attempt to take some healthy exercise with The Dog had to be aborted after he was persecuted by two dogs running loose in a nearby field. One was large and menacing, but essentially harmless. The other was a very cute Border terrier puppy, which got right up the nose of my own Border terrier to the point where his snarls suggested that we had better clear off before he did it some serious damage. It has to be admitted that, if it had been almost any other breed of dog, I would have kicked it into next week myself. The owners whistled and called ineffectually, but were unable to intervene more energetically: in the man’s case, because he had a small child balanced on his shoulders, and in the woman’s case because she was too comically obese.

Memo to fellow dog owners: if you are too fat and / or lazy to run after your pet when it is causing a nuisance to others, don’t let it off the lead. I never do.

I had stopped swearing audibly after 100 yards or so, and had even stopped muttering under my breath by the time I encountered a large man with a large dog, properly under control on a lead, plodding along the road in the opposite direction.

“Good afternoon!” I said, in a way much cheerier than I was actually feeling.

He just stared through me, chillingly, as though I were invisible, and uttered not a word.

This is not particularly unusual behaviour in south Cheshire, it has to be said. Even so, something about him did make me wonder whether he might have been the Grim Reaper in mufti, taking a stroll between appointments? Or possibly, since he was within 50 yards of my house, simply casing the joint?