You can't fire me

15st 7lb, 6.0 units. I have been giving a lot of thought to the following sign, spotted outside St Giles-in-the-Fields in Holborn during a recent visit to London but not, I guess, actually pasted up by the church authorities. 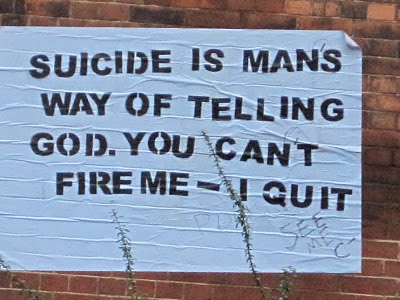 Makes a change from 'Give Satan an inch and he'll be a ruler'
or for that matter
'If you are tired of sin, come inside.  If not, ring ...'
I keep reading press reports of how young people have topped themselves after studying internet guides to suicide, so over the weekend I conducted extensive research to find a foolproof, painless way of doing away with myself. This, I reasoned, would stop me feeling miserable and worrying about how the hell I am going to support my wife and son. They, in turn, would benefit from a modest windfall from my pension fund, the freedom to sell my house in Northumberland without all the sentimental hang-ups that have prevented me from doing so, and the ability to make a fresh start with someone altogether more positive and dynamic.

However, it all proved academic as every website I looked at seemed to have been got at by anti-suicide activists to ask “Are you really sure? It’s going to hurt, you know. A lot. And you’re probably going to change your mind halfway through and die in agony scrabbling unsuccessfully to loosen the rope / clamber out of the river / whatever. Oh, and have you thought how horribly disfigured your corpse will be if you do it this way, and how upsetting that will be for the poor sod who has to come and identify you?” etc etc etc.

Enough to put anyone off, in short.

The bottom line is that I am bloody annoyed with myself because I have suffered from clinical depression, on and off, since 1973, and know by now that there are a huge range of practical things I can do to mitigate its effects. Like getting up early in the morning, rather than lying in bed feeling sorry for myself; cutting down on my calorie intake, instead of stuffing myself with chocolate and other comfort foods; finding simple, practical things to do now, rather than brooding about all those major projects that never got finished or even started; focusing on the near term, instead of all the things that could possibly go wrong in the more distant future; and taking exercise in the fresh air, rather than lying on the sofa with a laptop, conducting a grand tour of suicide websites. I need hardly add that I have been ticking Box B rather than A for everything on that list for days now.

Still, it could be worse. I could still be single, in which case I would undoubtedly have cancelled the trip to London scheduled for today, so that I could maintain my single-minded focus on being utterly miserable. As it was, Mrs H insisted that I climbed the Everest of packing a small suitcase and got us onto the 09.35 to Euston, where I even cheered up enough to write my weekly column for the Newcastle Journal. Though it was, I regret to say, about depression.