The smoothest thing in the world

15st 4lb (estimated), 7.5 units. My God, what a dull life I lead. My typical Sunday starts doing the ironing to the Archers Omnibus (but last week’s, on the BBC iPlayer, because I never seem to get up to date – in my world it still hasn’t snowed yet in Ambridge). Then I listen to Desert Island Discs in the shower. This week an American crime writer I have never heard of, with a bit of a Beethoven obsession; last week some window dresser from Harvey Nichols whose gift for self-publicity has apparently transformed her into some sort of retail guru. She recently widened her net from fashion, which I am prepared to admit that she may know something about (though from her description to Kirsty Wossname of what she was wearing I rather doubt it) and penned an attack on Greggs the bakers for “failing to lead the industry” by switching to organic, artisan breads. The sort of stuff, in short, that appeals to upmarket lesbian fashionistas living in the more expensive parts of London, but is hardly compatible with the mass market positioning of a business that has done wonderfully well for many years with its inexpensive but good quality handmade sandwiches and “iconic” sausage rolls. Yes, I have an interest to declare, but I can make the “quality” point after seeing their bakeries and shops from the inside as well as from the standpoint of a satisfied consumer of 40-odd years standing. 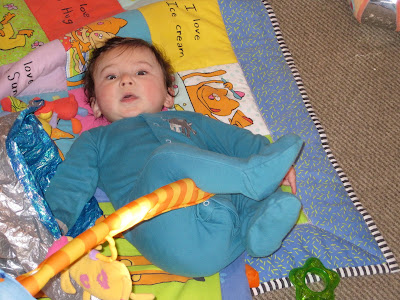 The Baby successfully ignoring The Archers
Where was I?

Oh yes, my dull day. We decided to try a new pub strongly recommended by one of Mrs H’s baby-related acquaintances, who said that “you just keep going on straight up your lane and you come to it”. Well, you do. But only after you have gone several miles out of your way and performed a U-turn in someone’s driveway, as it turned out. Mrs H, her parents and I walked into one of those places where there are lots of people sitting around tables with drinks but no food, all looking hopefully in the direction of the kitchen. I could tell from Mrs H’s expression that I did not have a hope in hell of pursuing my Plan A in these circumstances, which is to turn around and go somewhere else. So I went with Plan B: order starters, because if the main course is going to take forever you might as well have something to eat to dull the pain. Jolly delicious they were, too, as were the main courses and completely unnecessary puddings we ate, purely in the interests of research, when they eventually turned up. Though an exception should perhaps be made for the pies Mrs H’s parents ordered for their main courses from the cut-price side of the menu, ignoring the warning implicit in the words “served with chips and pub gravy”.

We had arrived 15 minutes late at 1.45 and finally left shortly after 4, so why the hell I left them a generous tip for service I can’t really imagine. I suppose it was smiling and efficient when food did finally arrive, and we were kept entertained by a cabaret of young families out for a Slow Food Sunday lunch. I particularly enjoyed the blonde lady opposite whose blouse kept coming unbuttoned, making me feel that I might have wandered into a reunion for fans of the Benny Hill Show. Then there was the yummy mummy with the highly visible thong who kept us in stitches by ordering two bowls of spaghetti for her small daughters (a brave choice, to say the least) and reduced Mrs H to hysterics with her answer to the question:

“Mummy, what is the smoothest thing in the world?”

Mrs H then had to apologize for eavesdropping, which is the sort of thing I always find satisfying.

After lunch we somehow found The Baby kidnapped by his grandparents and spent a quiet evening on our own at home, Mrs H diligently researching the Ofsted ranking of nurseries while I read Chris Mullin’s A Very British Coup. Satisfying, but I’d clearly be lying if I claimed it was a day worth writing about.

Ah - but so entertaining to read Mr H!

As a person of similar listening habits (hardly unique I grant you) I wonder if you have discovered 'This American Life'?

Don't be put off by the name - and do explore the back episodes...

Thanks for upping your output - such enjoyable work avoidance......

Thank you for the supportive comment and helpful suggestion, but particularly the former. I would say "you have no idea how much this is appreciated". But now, with any luck, you do.