Not in the mood for dancing

15st 4lb, 4.5 units. Mrs H had arranged to take The Baby to some sort of dance class this morning, so it was down to me to wait at home for the promised arrival of Uncle Dave with the magic finger to restart our central heating boiler. I am not entirely sure whether The Baby is studying classical or modern dance, but he wasn’t wearing tights or a top hat and tails when he left the house, so I feel pretty safe in saying that it can’t be ballet or ballroom. What may be stated with total confidence is that he already knows more about dancing, at the age of just short of seven months, than his father does after an additional 55 years.

There was a brief period in the early 1980s when I had lost enough weight to feel reasonably confident about my body and I did venture out onto the floor for what I believe people at the time called a “bop”, hoping that it might lead on to what was then popularly known as a “bonk”. The first time I tried it a very pretty girl kissed me, albeit chastely. This was encouraging. The second time an almost equally pretty girl told me to piss off when I attempted to make lip contact, so I reverted to type and just said “Sorry, I don’t dance” whenever the possibility was subsequently raised with me. This has led to some excruciating misunderstandings over the years, the most recent occurring just before Christmas, when people refuse to take the statement at face value and interpret it as meaning “I’m just a teensy bit reluctant but of course I’ll do it if you insist”. Which is not what I mean at all.

I did make a solitary exception, over my own dead body, for the first dance at my wedding. The resulting, excruciating pictures are, I contend, conclusive proof of how right I have been to “just say no” before and since. 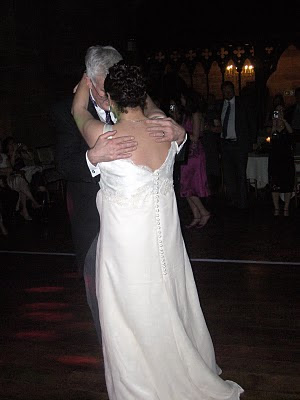 Why I don't dance: far too easy to confuse close attention to your feet with leering down your partner's cleavage (there are other reasons, too)
However, I do not want my son to be a social cripple like me (nor, as Mrs H kindly put it back in June 2008, a curmudgeonly, racist, paedophile snob; I should perhaps re-emphasize that I dispute the “paedophile”). So I welcome these classes as I delight in his progress at swimming, about which he also now knows vastly more than me (approximately ten years’ worth of weekly lessons at the Royal Grammar School, Newcastle upon Tyne, and I still can’t swim a stroke). While I would like him to be an old-fashioned English gentleman, I don’t want him to be the sort of person who views the devastated white concrete buildings in Haiti on his TV and is tempted to crack tasteless jokes, whether involving Garibaldi biscuits or otherwise. God forbid.

Predictably enough, Uncle Dave did not turn up first thing, as billed, so at 11.30 I thought “What’s the worst thing that can happen?” and pressed the red button on the boiler myself. It started immediately. I hung around for long enough to establish that the radiators were beginning to heat up, then cleared off to visit a client who does a very decent line in fish and chips for Friday lunch. The afternoon proved unexpectedly busy, what with one client deciding to admit that they might be thinking of returning to the stock market, and another engaged in a vigorous internal debate about whether it was a good idea to advertise their contempt for political correctness.

There was still snow on the ground when I drove up to our house shortly after 7; yet when I let the dog out for the last time at around 11 the lawn was completely green. And I never built that bloody snowman. Damn.