15st 4lb, 6.0 units. We were going to drive to Northumberland today, but were deterred by a passing mention on Ceefax (remember that?) of dire weather in the North East, which happened to catch my eye as I was flicking through the headlines during a lull in our TV viewing last night. We duly stayed up to watch the BBC News, expecting to see a full account of this gripping natural disaster, but there was no mention of it whatsoever. Yet you just know that if it had happened in the South East, it would have been the lead item on the bulletin. Usually I am the first to agree that my fellow Geordies are just a bunch of chippy whingers, but every so often their obsession with being overlooked is based on the solid reality of … being overlooked. A scan of the splendid Newcastle Journal online confirmed that conditions in the region are indeed bloody awful. And, to add to the joy of life, that it was the one and only part of the UK where average house prices fell during 2009. Marvellous. So glad to have retained my investment there, then.

So here we are in Cheshire, with the rain stotting down (as they don’t say in these parts) when it is not actually snowing. We have not even felt able to take the walk through the fields which was the highlight of yesterday. 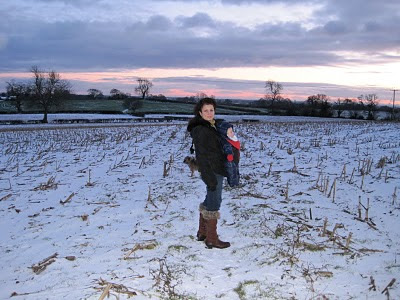 Yesterday. Not as shit as today, as Sir Paul McCartney might have put it.
But in at least one important respect Cheshire and Northumberland are evenly matched; neither unitary local authority deems it necessary to apply grit or salt to minor roads. The lane outside our house lacks only Torvill & Dean executing arabesques and a little row of glum-faced individuals holding up numbers at the end of each routine. I drove to the village for a newspaper this morning, and obtained my biggest adrenalin surge in weeks when I applied my foot to the brakes and absolutely nothing happened. Actually, that is not true. Several things happened: there was a rat-a-tat-a-tat noise from the wheels, and I swore quite loudly, to name but two. But the expected thing, of the car coming to a halt, showed no sign of happening at all. Luckily I had only been doing a cautious 20mph at the start of the attempted manoeuvre, and there was nothing coming when my new car slipped majestically over the “Give Way” line onto the main road, like a mighty Cunarder coming down the slipway into the Tyne or Clyde. Maybe I should follow the example of the shipyards and carry around a load of old iron chains that I could sling out of the rear to arrest my progress at times like these.

Glad no one was hurt.... but I did laugh at your
vexated description of applying your brakes...
to no avail.

Happy New Year to you and your lovely family.

Thank you for that, and a very Happy New Year to you, too. I was cast into deep gloom a few weeks ago when I noticed that you had removed yourself as one of the pathetically few followers of my other blog. I feared that you had taken umbrage over my failure to acknowledge your regular comments there, which had been much appreciated. The truth is, I'm just very lazy. But thank you for reading and for taking the trouble to comment. It makes my day!