The start of the rainy season

I got up early this morning to JFDI in the blog-writing department, but found myself distracted by the mesmerizing beauty of the early morning mist lying on the fields in the valley below my house. At least I had the presence of mind to go outside in my dressing gown and take some photographs, meaning that the day had not been entirely wasted whatever happened later on. 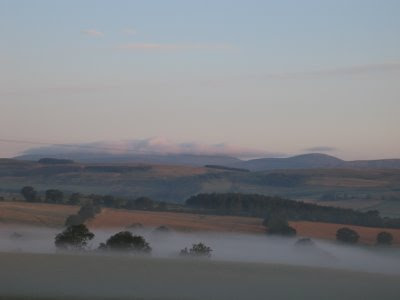 I should have known that the weather was about to take a marked turn for the worse, not because of some old wives’ tales about the meaning of mist on the fields, but because the local timber merchants rang me at the crack of office hours to say that they were ready to deliver the load of logs I had ordered a few days ago. Normally I order these shortly before Christmas and their arrival is the cue for a blizzard which leaves them buried under about a foot of snow for at least a week. This would be pushing it even for Northumberland in early September, but I knew that the fine and bright conditions prevailing when the lorry backed into my yard could not possibly last. 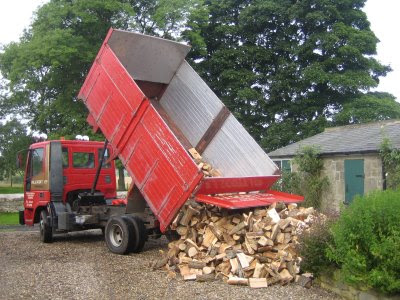 The cue for torrential rain, though if only snow is unavailable
It duly started to drizzle in an annoying sort of way by the time we were half way round the LTCB’s morning training run. It was definitely raining by the time we got back and started trying to get the logs under cover, managing to chuck about two thirds of them into the shed before we broke for lunch. Maybe it was the two glasses of wine I had with that which clouded my usual sound judgement and led me to take the dog for a walk in what had now become a positive downpour. Or maybe it was guilt because he had not been taken for a walk yesterday while we were out seeing the sights of South Shields and Durham (the latter taking rather more time than the former). Whatever the reason, the sight of us so amazed the local gamekeeper that he was moved to pause and wind down the window of his pick-up truck to call “And this is midsummer!” Which was not strictly accurate, but seems worthy of a place in the record as the first and only occasion in the 20 years I have lived here that I can recall him actually speaking to me.

By the time we left to drive to supper in the Tyne Valley, the rain had been coming down heavily for several hours. I deemed it prudent to go via Newcastle on what pass for main roads in these parts, rather than taking the direct route across country. There was a great deal of water around, and one minor accident (in which we were spectators rather than participants) as a result of it. With her usual impeccable taste, the LTCB requested something called a “Dark and Stormy” to celebrate our safe arrival (which had been a damn close run thing, as I peered to find a sharply rising drive off the A69 in pitch darkness and monsoon conditions, with an enormous lorry about six feet from my rear bumper). Still, the superb meal to which we were treated made the dreadful journey well worthwhile. Though it was a shame to be unable to make the most of the fine wines because I had failed to grasp that we were invited to stay the night afterwards. The return journey was even slower and more fraught than the outward one, with the roads well under water more or less throughout and the wipers working at top speed in a not altogether successful effort to enable me to see where the hell I was going.