The female rucksack and the Cheshire jumper

No idea of my weight, though I don’t suppose it will have been helped by the 13.5 units of alcohol I necked yesterday evening. I have precisely 1,250 more days in this Vale of Tears, if the forecast of my life expectancy proves more accurate than those we keep receiving from the Met Office and the Treasury. Today: Durham.

The first thing that the Less Tall Cheshire Brunette did on getting out of bed this morning was to throw open the window. I am sure I felt the planet reeling on its axis as the foul miasma from our room rushed out to join the other multifarious threats to its fragile atmosphere.

We then wandered downstairs and ate the inevitable Full English breakfast which is the cornerstone of my Newcastle club’s reputation for good cooking. I remarked to the LTCB that it is one of the very few places I know that still serves proper fried bread, prompting her to deliver a few discouraging remarks about the content of fried bread and its likely effects on the health and well-being of the consumer. So I stoically offered to eat hers as well, and was pleasantly surprised when she assented.

After a couple of slices of toast and marmalade, just to make sure that we were adequately nourished, we went off to do a bit of shopping in Newcastle. I proudly showed her such curiosities as the surviving Marks & Spencer Penny Bazaar in the Grainger Market, where we also took the opportunity to buy some vegetables. Although it does not seem too long since I was last there, I noted that the fruit and veg stalls seemed to be much diminished in number and that all had converted themselves into self service operations. I rather missed the cheerful Geordie banter that used to cover the assembly of a bag full of produce, which naturally bore no resemblance whatsoever to the superb specimens on display on the front of the stall. I just love being conned, so long as it is done with wit and style.

Finally we visited three shops in search of a new rucksack for me, to replace the one lately consumed by mice. The search was prolonged by the discovery that rucksacks come in male and female versions, which was news to me. Something to do with the shape of the hips, apparently, rather than having built-in mirrors and extra compartments to accommodate all the crap normally placed in handbags. I was not allowed to buy the one I liked in the first shop because they only had it in stock in a female version. I was rather disappointed with the one I ended up with, to be honest, as it was an “own label” model in green, which was half the price of any of the top brands and will not stand out anything like so luridly when I am lying face down in the grass after my heart attack and the RAF search and rescue helicopter is out looking for me. I am also worried that I may now lose hill credibility, as I believe urban youths do on the street when their mothers buy them Pound Shop trainers rather than a heavily advertised brand.

We spent the latter part of the morning driving around the course of the Great North Run as a familiarization exercise for the LTCB. She expressed dismay about the profusion of steep hills every time we drove up the approach ramp of a railway bridge, so on the whole I don’t think I will be entering her for the fell run at the next Alwinton Show.

Then we went to Durham and had a difference of opinion about what we had actually meant when we agreed, after our massive breakfast, that we were going to skip lunch. The LTCB maintained that she had added the caveat “Unless I’m hungry”. It comes to something when a fat bastard like me ends up trying to persuade a normally sized person that they don’t need to eat. I hate any departures from an agreed plan, too, so I wasn’t particularly polite about it. Then I insisted on leaving the first place we entered in search of a salad, because it was obvious that the two dim-looking and hugely overworked youngsters manning it were going to take forever to reach us to take an order, never mind prepare and serve it. We eventually fetched up in a none-too-clean cafeteria where the staff had great difficulty understanding English despite the fact that they clearly WERE English, and from Durham at that. In short, it was by no means the best of the times we have spent together. 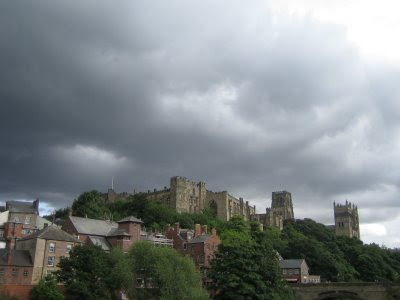 From this low point we walked on up to the great cathedral itself, which I always think somehow manages the reverse Tardis effect of looking considerably smaller on the inside than it does when viewed from the railway viaduct. There is no denying that it is still immensely impressive, though. The LTCB walked around with a mini-guide (which sadly turned out to be a free pamphlet, rather than the hoped-for dwarf on work experience) and we climbed the 325 steps to the top of the tower (or minaret, as she called it), where I spent some time clinging to the flagpole in the middle and attempting to make light of my vertigo. The LTCB observed that she had always been baffled by what on earth motivated people to chuck themselves off the top of high buildings, but now she understood perfectly, as it seemed like a pretty attractive option compared with facing all those bloody stairs again.

In view of my somewhat – oh, all right, very – peevish performance in the café earlier, I felt justifiably relieved that the only person she was talking about going over the edge was herself.