It has been so long since I took a proper walk in the hills that it was only on preparing for one this morning that I realized that my rucksack had been all but destroyed by mice, which had chewed great holes in the fabric once they had worked their way through the more obviously edible contents, such as the treats one needs to incentivize a recalcitrant Border terrier. Still, in these difficult times, this will at least provide a small fragment of good news for one specialist retailer.

After fortifying ourselves with a decent breakfast the LTCB and I drove to Upper Coquetdale and parked by a fork in the valley road, where the Slyme Foot pub had once stood as a noted centre of petty criminality and debauchery. It seemed pretty much an ideal day for a walk yet there was only one other civilian car parked there, together with an Army jeep against which two soldiers were leaning, staring at the hills and looking bored. A blonde female, who seemed to be the more senior of the pair, asked us to look out for two blokes in uniform, one of whom would be carrying a spade, and ask them to get a move on. It made me think that the occasional comments I read in the papers about the inadequacy of military communications equipment might indeed be rather well founded.

So we set off up the old smugglers’ trail, unimaginatively named The Street. We soon met an obviously gay man in tight, skimpy shorts, who was running quite fast in the opposite direction. He had certainly established a good lead over the two missing soldiers with the spade, who passed us about an hour and a half later. We conveyed the message we had been given, though I was more than a little dubious about its value given that the waiting jeep had disappeared by the time I turned around to admire the view at the top of the first hill we had climbed after leaving our parking place. At least, that was what I was pretending to do while I caught my breath.

Stopping around 1.30 to eat our lunch we made our last human contact of the afternoon, with three old ladies – in their mid-70s, by the look of them, though they were clearly far fitter than I am. They proved to be the occupants of the other car parked at the foot of the valley, and were doing the self-same walk as us, but in the opposite direction. They congratulated us on choosing such a fine picnic spot from which to admire the wild Cheviot goats, which I had completely failed to notice on the hillside opposite. One of them kindly offered to lend us her binoculars so that we could have a better look, and the LTCB duly took them and expressed wonder and appreciation; while I manfully suppressed my sneaking feeling that she was actually focusing on a nearby flock of sheep instead. 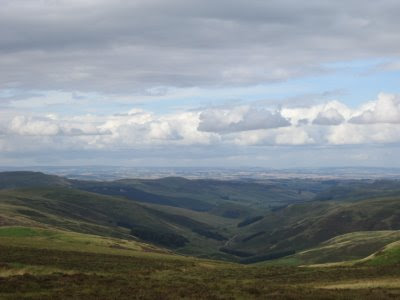 Scotland: so much better to look at than to visit

We eventually reached the Border fence, where wonderful views into Scotland opened up, and after some three hours of walking we came to Russell’s Cairn on Windy Gyle. Which was fine, except that on all past form I had expected to be back at the car by this stage. I should have remembered from my previous experience of walking with the LTCB in Cheshire that when in her company walks really do take as long as the guide book suggests, and not about a third less time as has been my rule of thumb when on my own. Still, the additional hour and a half passed most agreeably, I must say. Even allowing for the fact that we got soaked to the skin walking the last stretch of road back to the car past The Trows and Rowhope, when we would have been back at home with our feet up if we had been able to adhere to my usual schedule. 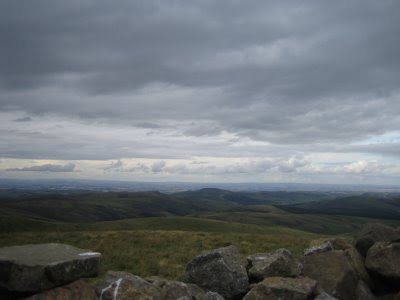 Beyond Russell's Cairn, Scotland broods about past injustices 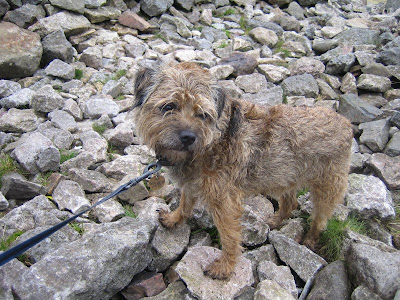 Within Russell's Cairn, a Border terrier broods about current injustices:
leads, sheep and dinner feature prominently
This evening I cooked again, transforming four-year-old pork fillet from the freezer into something entirely edible, also involving cream, avocado pear and a pinch or two of curry powder. Afterwards we played Scrabble at the dining table. Rather slowly. The LTCB bit her lip thoughtfully as she conjured up high scoring words like “tum” and “wig”, and I was forcibly struck by how very young she looks. Think of the grief that Gary Glitter could have saved himself if he had stayed in England, started a blog and focused on appealing to a slightly higher age group.