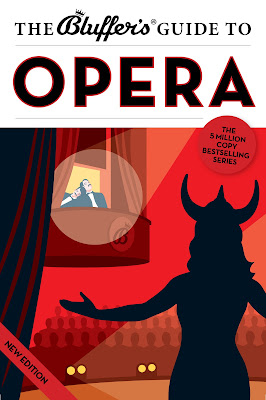 Out Now | The Bluffer’s Guide to Opera by Keith Hann

‘An essential pre-season read for anyone attempting to navigate the pitfalls of post-performance drinks.’
DAVID ROSS, FOUNDER, NEVILL HOLT OPERA

Never again confuse a castrato with a contralto, a prima donna with sopratitoli, or O Sole Mio with an ice cream advert. Bask in the admiration of your fellow opera lovers as you pronounce confidently on the merits of Donizetti’s bel canto over Wagner’s leitmotiv, and hold your own against the most sneering of opera buffs.

‘A very amusing, knowledgeable and enjoyable introduction to opera by someone who has spent far too much time at Glyndebourne and not enough at Grange Park Opera.'
WASFI KANI OBE, FOUNDER, GRANGE PARK OPERA

A 5-million-copy bestselling series, The Bluffer’s Guides® have been helping people out of sticky situations for over four decades. Now relaunched, they’re back – and not just in paperback. E-books are available from all major online bookstores.

The Bluffer’s Guides’ mission is to eradicate social embarrassment from this world, and (with the help of their witty and erudite experts) they’re well on their way to doing that.

The Sunday Telegraph described the original series as containing ‘an amazing amount of solid fact disguised as frivolous observation’ and Daily Mail hailed the guides as providing a ‘means to apparent instant erudition without actually having to know or study anything.’

‘Keith Hann's whistle-stop opera tour brims with his passion for this great art form – and contains many more laughs than any opera I have conducted so far.’
PAUL MCCREESH, CONDUCTOR

Born in Newcastle upon Tyne in 1954, Keith Hann grew up in a household devoted to the music of the two Maxes, Jaffa and Bygraves, but luckily introduced himself to opera shortly before leaving school. Over the last 40 years he has watched the curtain rise on more than 1,000 operatic performances, and waited until it fell on 997 of them. In order to fund this addiction, he has been variously employed as an unsuccessful stockbroker and an incompetent but occasionally entertaining public relations consultant. Decades of skilful bluffing brought him to the brink of retirement without any lasting romantic entanglements, until a momentary lapse of concentration one evening at Covent Garden led to his marriage at the age of 54, and the subsequent arrival of two children. Keith currently devotes most of his time to not writing a novel and staring forlornly at his bank statements. In consequence, he values his now strictly rationed excursions to opera houses more than ever.

E-book available for Kindle and iPad at Amazon.co.uk and iBookstore. Print edition in stores and at online retailers now (RRP £6.99).