Out and about with a loony dwarf

15st 10lb, zero units. Sometimes my son is the sweetest little boy that anyone could possibly imagine; at other times life with him resembles nothing so much as being in the company of a loony dwarf cloned from Mao Tse-tung or Adolf Hitler.

I am currently beginning to worry that our failure to pay for a Sky TV subscription, partly out of meanness but mainly because of my long-standing dislike of all that Rupert Murdoch stands for, has left him overexposed to the inevitably left-wing hippy standards of the BBC’s CBBC channel. I mean, Waybuloo: what the hell is that all about? 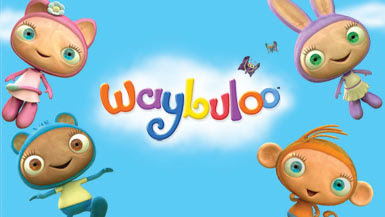 And if we continue to be able to afford to live in middle class rural England, it surely won’t be long before he starts questioning why there is such a marked shortage of the black, disabled and screamingly gay role models of which he sees so much on the telly.

His indoctrination with political correctness struck me forcibly in Sainsbury’s this morning. There was a buy-one-get-one-free offer on Cathedral City Cheddar, so Mrs H naturally tried to stick two of the things in our trolley. But The Boy hurled himself in front of her and announced sternly, “We only need one, Mummy.”

“Yes, but they’re on a special offer and we don’t have to pay for the other one, so it would be silly not to take it.”

“But we only need one, Mummy.”

So you end up in the middle of a busy supermarket trying to explain that we are, in fact, responsible shoppers who would never dream of taking up those pernicious BOGOF offers on fresh food that stands no chance of being consumed before it goes off and ends up being transferred directly from fridge to bin. But on stuff with a reasonably long life like cheese, which we were going to buy anyway, it is actually mad not to take advantage of the offer.

And then Mrs H did her, “Look, what’s that?” trick, pointing down the aisle, and sneaked the second packet into the trolley while he wasn’t looking.

I quite expected to be having this sort of conversation with my child at some point. Just not when he is two and a half. I dread to think what is going to happen when he finally discovers what goes into the sausages that have been his favourite food since he moved onto solids.

I tried to take his photograph eating some in the pub where we went for lunch after Sainsbury’s, but he threw a tantrum, putting his hands in front of his face and weeping “No, no photos now, Daddy!” 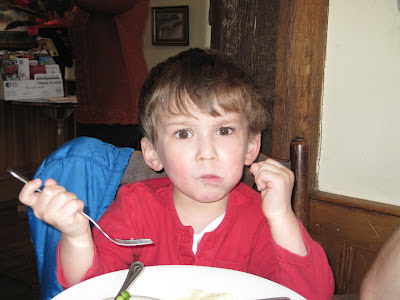 I had to sneak this one by pulling the “What’s that?” trick yet again. I wonder how much longer that will work?

As you can see, to say that he wasn't happy about it is something of an understatement.

On second thoughts, maybe he’s a loony dwarf cloned from Hugh Grant rather than Adolf Hitler.

But such a handsome adorable looney dwarf.....about to meet the end of his reign
as the boy who walks on water. "Enter De Brudder". This event will adjust his thinking
about just about everything........
Been there, done that. :~)

Hmm, I think I've seen that Waybuloo thing and I would blame that too.
If you happen to get Sponge Bob Square Pants on TV then that will correct all his P.C. tendencies in short order. If not, you might have to subscribe to SKY.
:-)